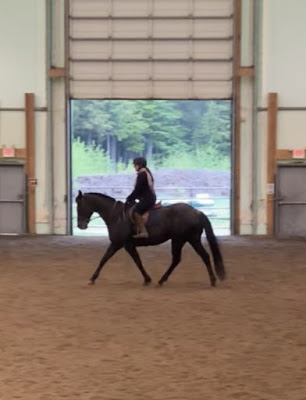 With Day 1 down and out of the way, I was feeling a lot more confident about Day 2. It seemed like my worst fears had been stomped down and I could focus and enjoy my horse, the lesson, and follow the instruction without being too guarded or worrying if something would trigger a reaction (nevermind the fact that Annie has been schooling just fine aside from the one day I previously mentioned).

It had absolutely poured rain overnight, and when I crawled out of bed around 7:30am, I inwardly groaned knowing that I undoubtedly was about to be cold and wet for a majority of the morning. With my lesson at 9:15 and a good 50 minute drive ahead of me, I was less than enthused to be getting up early on my only day off for the week. So hard done by, having to get up early for a riding lesson.

I did run a bit late at the horses in the morning which meant I didn't get a chance to nebulize before trailering out, but figured I could nebulize at the grounds if needed. Since Annie was pretty soaked, I threw a cooler on and crossed my fingers she would be dry enough by the time we reached the grounds. The rain continued for the entire drive, and as I sped up my wipers, I tried to not focus on how miserable riding in the cold and rain would be. 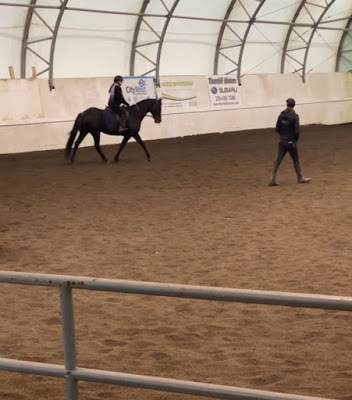 Unfortunately, the lessons got a bit back-logged and mine ended up getting bumped to an hour later. Which, no biggie, it happens. One of the awesome things about Anthony is that he isn't under a time crunch - if you need longer than your slotted 45 minutes to figure something out, he'll happily coach you until things are in a good place. I've been one of those lessons before, so I can both understand and appreciate the delay.

I ended up not nebulizing, because of the time delay I figured I'd wait until we got closer, and then before I knew it, it was time to get on. Time management is difficult when you aren't exactly sure what your ride time is and are too focused on being late that you end up being late anyways. Oh, anxiety.

I needn't worry though, because the lack of nebulizing was a non-issue. Annie was perfectly happy to go round and we were able to get some good work in. Because it was her first time back in the indoor arena in (oh man I just looked back... it's been a while) several months and even longer since she was ridden in it, mare was SPOOKY.

Coffee cups on the mounting block were a NO GO and it took a little bit to get the hamsters back on their wheels and all cylinders firing once again. It was a good opportunity tho, because it made me realize just how much I hang on my inside rein (esp tracking left... which is our bad canter steering way.... a coincidence maybe?? Maybe not).

Anthony instructed me to drop my inside rein, focus on making her an athlete (forward and steer) and ignore the rest. Spooking wasn't the issue, the issue was lack of forward and lack of steering. My resolution to this was to pull the inside rein, which off-balances her and over-bends her - as Anthony put it, "If you are coming up to a spooky liverpool, are you going to grab the inside rein and overbend?"

Once Annie stopped being so offended by the arena drag and the coffee cup, we went to work on the previous days lesson. The basis of this lesson was keeping her engaged in the bridle but not deep and down. A majority of our work was also on my tendency to push the inside rein into her neck and/or keep it tight against the neck. It was really hard trying to retrain myself to slacken that rein and to straighten her head/neck. The flat-work went well enough that Anthony suggested heading to the outdoor to pop over some jumps and I was quite surprised (and flattered, bc long-time readers might remember how hard I've worked to make it over some jumps in his clinics! I've spent a fair amount of clinics just flatting because we weren't "quite there" yet.) he gave me an entire course to play with.

It was very interesting to see the difference in both Annie and myself when I sat down and compared to previous clinics. I think a large portion of it was that I actually rode my horse. Which, might sound silly in one vein but I have a tendency to sit there and wait for instruction from the clinician vs actually committing to a plan and riding it. I think a lot of it stems from anxiety - not wanting to be wrong or making the wrong choice, but at the end of the day, there are certain things (a, b, c)  I need to still do so that x, y, z works. Because without a,b,c I end up having no x, y, z but also an issue of d, e, f to now deal with. If that makes sense?
I really wanted to jump on Day 2, since Day 1 was largely flat and by the time we wandered over to the jumps, Annie had pretty much zero fuel left in the tank. It took a lot of brain power for me to just do the things, even though that uncertain part of me was nagging, "Just wait for direction. She's drifting left... need to wait for Anthony to tell me to correct it." I was a lot more proactive than I have been in the past and it paid off in dividends. Anthony was quite pleased with the efforts and remarked that had our final round been our warm up round (and that it can be our warm up round), what fun we would have playing around for the remainder of the lesson.
She felt pretty good to jump - I concentrated quite hard on keeping her straight, in an even tempo and chugging along. You know, all the basics. Like I outlined above tho, it can be hard for my brain to remember all the things, because for some reason I convince myself that sitting up there like a monkey is the best possible course of action when in a clinic. Being proactive paid off tho and although there was some "meh" parts of the course, overall it flowed relatively well and we didn't have much issue. I was pretty proud of myself for staying attentive and proactively riding my mare - silly as it sounds, it is something I struggle with.
Overall, a very positive and impactful two days worth of instruction. I was doggone tired and absolutely riding a clinic high - the ability to participate in one relit a fire of desire I had forgotten I had and made me doubly proud of my mare and all that she has accomplished over the years. Certainly a great way to start off the clinic season - hopefully Annie continues to be game as the summer unfolds.
Posted by Cathryn at 1:04 PM