When I first got Maizey, I knew I was in over my head a little bit - she was a (mostly) untouched weanling, who was used to being turned out on several hundred acres with her dam and several other foals. Her daily life included her mother, her friends, food, and an occasional human observing from a distance. Her life was pretty simplistic and the basic needs were all met - until one day she was removed from her usual surroundings and weaned from her mother. A small amount of handling occurred, but nothing consistent or concise until she came home.

I remember unloading her at home, unclipping the leadrope in her temp paddock and thinking, "I'm never going to catch her again."

She wasn't what I would call wild - but she was certainly fearful. I can understand her apprehension to people, considering a large majority of her interactions with them were linked to mass life changes and brought a lot of confusion. Which, is sometimes the way of things. I couldn't spend several weeks teaching her to lead and load in a trailer to take her home. Of course, we were as gentle and kind as possible, but we also needed to get this horse home.

Which - if you ever breed horses you intend to sell, please give them the basics. I understand it's "not the way" for some areas or disciplines or people, but giving them a basic start to life is so much easier on everyone and removes a lot of unnecessary stress and turmoil from the animal.

Soapbox rant aside, I've had a lot of fun learning about babies and have made quite a few observations in Maizey's "preschool" education. She's kind and intelligent, but she also is also fear/ reactive-based (like most unhandled horses). Her response to something "scary" (let's use an example of a tarp) is to be on high alert - ready to vacate the area if the threat intensifies. Which, is a pretty normal equine response when you think of it.

I've been picking my brain a bit, wanting to work on piquing her curiosity and have her be confident in herself. I don't want a horse to rely on me for all of it's confidence in awkward or weird situations - I want that horse to be confident in themselves to react in a way that is sensible and makes sense.

As I pondered the best way to encourage and motivate her, I recognized there was a very similar "game" I play with Cedar that has proven to increase his own critical thinking and confidence. 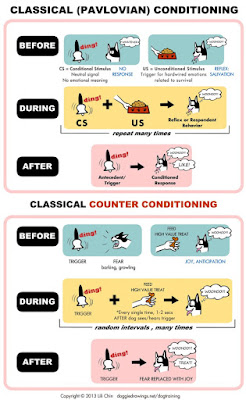 Classical conditioning is a process by which an animal associates a neutral stimulus (ie. tarp, ball, umbrella) with a positive/potent stimulus (ie. food, treats). It is commonly used to chain behaviors in dog training, and while it can be a bit of a "long" process, it allows the dog to think for itself and become confident in their own decisions, knowing that the end result for them is positive.

In situations of dog reactivity (in Cedar's case), it can be exceptionally beneficial, because it allows the dog to associate the stressors (other dogs) with something positive - this is counter-conditioning, as it relates to a "negative" stimulus. And in Maizey's case, it would serve some of the same purpose. I wanted to harvest and encourage her curiosity, and if Maizey recognized she was getting "paid to play", it may also entice her to explore things a bit more.

It is a process that starts off rather slow, but in my experience with Maizey (and Cedar), it gains traction relatively quickly. To walk you through how this process work(ed)s for Moo and I, I played around with a very new stimulus (umbrella) and videoed the process as I worked through it.

Before I start, it's important I don't have any expectations - I let Maizey steer the direction of her training journey and it's important that I stay within her comfort zones to cultivate her curiosity and build her confidence. I also choose to not halter or restrain her in any way - she is free to leave if she so chooses, and she is free to maneuver however she likes throughout the process. I simply stand aside and let her do her thing and reward her for exhibiting the behavior I am looking for.

So what does that look like and how do I determine what behavior I am looking for/ what to reward?

I start off with an object, in this case an umbrella, and stand off to the side with food/ treats. In this situation, it's simply her soaked alfalfa cubes (which I do not recommend, as the umbrella, Maizey, and I all got covered in wet mush lol). I typically use sliced carrots or horse treats if I have any on hand, but I have seen that people have successfully used alfalfa pellets. It's important to use a treat that has value and it's important to remember it's value. In a circumstance where she over-exceeded my expectation, I would dole out treats like crazy (also known as giving her a "jackpot") or switch to a higher value treat (apples, sugar cubes... something your horse REALLY likes) that is different from their usual treat.

It's hard to get the hang of it, but timing is everything and in that case, understanding what earns a "regular" treat, a "jackpot", or a high value treat isn't as important as knowing when to treat.

In the above clip, it shows a pretty normal start to our sessions, which last 15-20 minutes. I simply offer the item and stand to the side and as soon as Maizey shows any kind of interaction with the item, she receives a treat. Something as simple as walking closer to it (if the horse is backed off of the item) or attempting to reach out and touch it are both things I would treat her for. Lipping the umbrella and causing some kind of movement is a pretty big deal, considering she hasn't been exposed to umbrellas before this.

Since she did so well with the umbrella sitting upright, I decided to move the umbrella around and offer it in a new position.

As I figured, the movement caused her to back off a bit. Which, isn't really the end of the world - as I outlined above, she is free to remove herself from the stimulus if she feels threatened or insecure. I don't acknowledge this or offer any food motivation - my goal isn't to entice her to the umbrella by spoon-feeding her treats all the way there. I may call or cluck at her to walk over, but I don't move, don't rattle the treats, and don't remove the stimulus or make it less intimidating (it's important to know your horses threshold so you don't overface them, especially in the beginning).

It also pays to be patient in this process because:

It may not seem like much, but she held her position, assessed it and decided to move forwards. You can see she is a bit apprehensive about me approaching (it was raining and the drops hitting the inside of the umbrella were a bit loud), but chooses to keep her foot planted and resumes her curiosity.

That single step towards the big, scary umbrella gets a treat - especially in the beginning stages. She made the right decision here, even being uncertain. And showing her she made a good decision piqued her interest and made her brave enough to continue on to do the following:

Moving the umbrella on her own, continuing to explore and becoming confident in herself!

You can see several instances I could have treated her, but I chose to wait to allow her to play around and explore. Once I saw the umbrella move a few times and her continuing to interact with it, I chose to treat her. I do vocally express how proud I am of her by giving a, "Good girl!" or "There you go!" to encourage her as well.

I let these sessions basically run themselves - seeing where Maizey is uncomfortable or falling short and trying to mend those bridges by simply being patient and offering treats at the right moments.

And eventually, it lends itself to:

Allowing the umbrella to move, assessing/ processing, and continuing to explore. She is apprehensive when I moved it, but her apprehension is also closely followed by curiosity, which is what I'm trying very hard to harvest in her.

Our umbrella session lasted a whole 12 minutes as per my phone, and it showed a horse starting to develop confidence in herself and the things around her and I'm pretty proud of that. As this is our first session with the umbrella, it still shows a lot of promise for things to come!

As she develops a bigger and better understanding of the world around her, she'll continue to flourish and become her own advocate, which is the primary reasoning for a lot of this. I had initially assumed that she would become resistant to interacting with the stimuli I provided, but the most she has done is tried to follow me for treats. When this occurs, I simply reposition myself (in the case of the blanket, I walk to the other side of the blanket, encouraging her to follow but not demanding she does so). She caught on pretty quickly that interaction = pay off.

For the short amount of time we've been playing with this new training regime, it's paid off in big ways. After an entire summer of endless tarp/ blanket walking, she would still balk at it the first few attempts at passing over. Which, is fine, she was scared pretty bad in the Spring and obviously it's manifested itself somehow. But the above GIFs of her with the blanket are our second session - something that would have never happened had she been haltered and asked to walk over. It's pretty impressive to see her brain turn as she found pretty quickly that treats come when the feet are on the blanket, not the nose.

It's going to be fun continuing to explore this with her - it warms my heart to see her working outside of her comfort zone without relying on halters and leads to keep her engaged or "with me". Of course, halters and leads have their place in training as well, but this experiment has been really fun and engaging for the both of us.

Which now begs the question(s) - have you done something similar with your horse? What was the outcome?