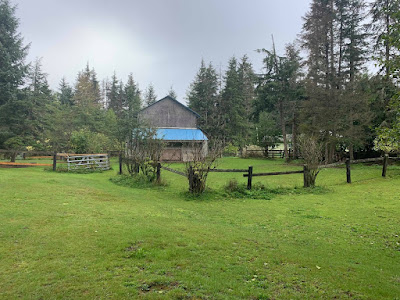 A few weeks ago I was notified that the barn owners wanted to close their doors on boarding and get ready to sell their property. I can't say I didn't see it coming - it had been alluded to in the past, but there was never any concrete plans or any real conversations about it. Without any definitive answers, I was happy to continue boarding and although I knew the prospect of change was in the future, I was still a bit blindsided by the declaration.

I've been lucky to call this private little barn "home" for the last several years - having the area completely for myself and my horses. It gave me peace of mind knowing I had a place for my horses, especially considering there were several problematic situations preventing me from changing barns, or moving on.

Of these problematic situations, and perhaps the most frustrating, is owning land, and having had a complete and utter fuck-around by the City as to what we can do with it. Sparing the nitty gritty details, the way the properties were sold to us were as three separate lots, which does not bode well when you want to build a barn and fence one section- if you do not have a primary residence, you cannot build a barn. Except, by that logic, we would be required to build a primary residence on each lot in addition to whichever outbuilding we would like to erect.

In an effort to spare our pocket books from having to consolidate ($$$$$$) or building three homes ($$$$$), we attempted to work with the City over the span of four years. Making little to no headway, in addition to one of the planners quite literally stating she would not approve a bylaw change for us to use of one lots for horses anyways, we battled it out during our City Council meetings for a year and a half. And it still is not over. Our Mayor and Council is very much in favor of helping us achieve our end goal, but once the final documents were sent to the City for processing (October 2019), they've remained with the status "processing" for the last three months. Our lawyer finally reached out in February, stating that things should be moving "soon".

It's been an incredibly frustrating process, but we will make it to the other side. We have the law changers on our side, but it's just going to take time. And unfortunately, I ran out of time boarding while we've been trying to figure out this silly mess.

Long time readers will know that boarding in our area is.... non-existent. If you own horses in our little town, you better own property (we do, but are still working on being able to do what we want to do with it) because the options are very few and far between.

It has been a really rough few weeks of trying to find accommodations for three horses - especially when one of those three cannot be on pasture. Options that were limited in the first place become even more limited when you have a Spud.

I panicked for the first few weeks, tossing and turning in bed, waking up in the middle of the night just to stare at the wall for hours. I felt sick, knowing if I could not find something it would mean sending my horses potentially to another town (where Barn C is; 50min-1hr away) until I could figure shit out. I waffled between selling - finding board for 1 or 2 horses is much easier than 3. And without the ability to self-board, I would have a very difficult time affording board on three horses.

I went to work straight away, I called up old mentors, instructors - quite literally the day I was notified. Having two months to find a solution wouldn't be much time, especially as we are still in the middle of a very cruel and deep Winter.

There were several options offered - most of which would result in splitting up my herd. I had meetings with a few potential places in town and in the little subdivision my horses have called home for the last few years and have finally come up with something that'll work.

It is a small section of land being offered to me and my horses by a family friend, who is graciously lending a helping hand during what is a very frustrating and trying time. The kicker is that although the area was used for horses many moons ago, it no longer has shelter or fencing, so it'll be up to me and the SO to implement those things. I won't have the amenities like I did at our current barn - days of having a tack room will be in the past, and the hay storage capacity of the barn will be long gone.

Some of the pros are that I have the ability to set up the fencing myself - no more old fencing that might fall when the wind blows, I am still 100% in charge of my horses care, I can come and go when I please, and perhaps the most exciting - I am much closer to the outdoor arena and the entrance to the subdivision. Also a neat thing, we will be right across the street from Nicole and AJ!

It'll take time to get things set up, especially with the snow load preventing any kind of fence building for the time being. It is also hard to appreciate the size of the area, given the fact it is still buried beneath 3ft of snow. Since I have some concerns about the size, I went ahead and set up alternative measures for Maizey, who is scheduled to be on pasture for most of the year anyways. If she has to be a bit of a feral beast for a year or two on pasture an hour and a half away, then that is what we will do. It's not a perfect solution, but I'm trying my hardest to keep things as easy as they can be without exhausting finances or time.

This being said, as much as I am relieved to finally have a place, I am overwhelmed with the amount of things we need to do to make this new place a safe and happy home for my horses while we work towards bringing them home. I don't think I will finally relax until they are actually home on our property - where I won't have to worry about being told I have two months to move.

It has been a really weird few weeks. I feel really out of place still, and as much as I am "happy" that I have found a solution, I am concerned about getting everything set up and implemented. I'm trying to be thankful, and learning that sometimes life doesn't always work out and sometimes, you need to roll with the punches.

So for now, I am thankful for people who are willing to help, because I have had so many offers in the last several weeks. None of which were "perfect", but sometimes you can't have perfection and must do what you need to do to survive for now.

I've slowly been gathering up my tack and have brought home a few tubs of equipment and have started to clean up the barn to prepare for leaving in May. We've begun picking plans for shelters and have plans to begin cutting boards on the sawmill within the next few weeks as things begin to thaw and melt.

It is going to be a change, and as much as I am sad to see this chapter close, I am reinvigorated with fire and passion to start rolling with our future plans of a barn and horses at home. It will take time, so for now, we will roll with the punches.