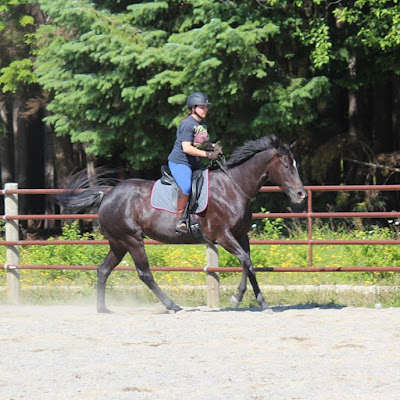 January 11th marked three years of ownership, and most importantly, partnership with Annie!

As my very first green horse, I didn't really understand what I was getting into at the time, and while I may have made some glaring mistakes and poor choices, I've learned so much about bringing up a young horse and the expectations we put on ourselves and our horses.

I learned how to become more "zen" and focus on our own journey, rather than the stigma of time and training. Realizing that each horse is an individual, and each rider has their own inner demons to face - something that is lacking in the equestrian world by far.

I was humbled many times over and persevered through disappointment and frustration - crying many tears in the process! Acknowledgement of my weak points mentally as a rider had me realizing that perhaps my expectations were not aligned with Annie's capabilities. I grew as a rider, not in physical skills, but psychologically and spiritually in ways I didn't quite understand as it happened.

Annie is an interesting mare by far - one side is very calm, collected and docile... while the other side oozes anxiety, misinterpretation, and frustration. She can be her own worst enemy at the best of times, especially in show settings. It has taken me many times over to learn that "fighting" back or getting involved is the wrong answer, and this simply heightens her frustration and anxiety.

It has taken a long time to not only recognize "going Zen" is the only way to ride this mare when she is upset, but to embody that mantra wholly and unapologetically. I think the first time I actually felt this in real life practice under pressure of my own was during our freestyle at the BVX. It was such a freeing feeling (despite the fact I had a lead changing maniac beneath me, aha) and I held fast to that feeling for the remainder of the weekend. When I dismounted, sure, I was disappointed, but I never let that feeling anchor itself in the saddle with me as we went around.

The last three years have been all about growth, and I can't imagine having any other horse to have had taught me that. The process of working with a young, underexposed horse showed me just how important a functional relationship is, and reminded me that professional help and guidance is never a bad thing. It threw me back, full force, into lesson strings and clinics and shows... I rejoined several friends ring-side and the memories made wandering the Northern forest, or travelling to clinics with a truck full of horsey girls are times that will be etched forever in my memory as some of the best times aboard this mare.

There is a strong allure to the quiet times too, though, and I have appreciated the down-time that Annie and I have shared. The times we wander quietly through brush and forest cover on our own, never speaking a word aloud, but drinking in the stillness of the world and allowing the rhythmic sounds of footfalls on the dirt-ridden Earth to lull our minds and bodies in sync like the effortless movement of a metronome.

As we begin yet another year, I am looking forward to what is yet to come - the continuation of a partnership, the further embodiment of the Zen Ninja lifestyle, the laughs ringside with friends, and of course, the quiet moments on our own.