Back in 2016, when I had freshly retired my elderly Quarter Horse mare Suzie due to navicular and arthritic changes in her knee, I had talked a lot about what my future with horses would look like. I contemplated then the possible reality of owning a foal - one from a very specific stallion and mare, a breeding program I had followed for several years.

I dwindled down that road for a while, and had even had it lined up to put a deposit on the mare's 2016 colt. Unfortunately, for reasons unknown to me it just wasn't meant to be. I picked myself up after his loss, and carried on, eventually finding Annie and bringing her home 6 months later.

This whole chasing baby thing has been a bit of a chaotic adventure - I set my eyes on this breeding program years ago and watched, forlornly from a distance until I edged out and tried to make it work. Life is both funny and cruel, so I took a step back from pursuing a dream that I couldn't seem to gain any traction on.

So after Annie, I kind of let it go.

More foals were born, weaned, and sold, and I watched with tepid interest.

Annie was working out great, and as my first foray into young horse ownership, she was a perfect teacher. I slowly gained traction on various goals I had wanted to reach, and the more I expanded my knowledge and interest in developing her, the more I felt I could actually "do this". As someone who rarely rode young horses, it was a big change, and I've learned so much from working with her that I feel more confident in dealing with green horses - something that was not a learned skill as I weaved through my equestrian journey, with a variety of coaches and friends to help us along the way.

And then the Summer of 2018 came, and the breeder announced she was getting out of breeding and as such, was selling a vast majority of her broodmares as well as her very successful and decorated stallion. I reached out to her, not really sure what I had in mind, but had a very soft agreement that should my pick of the broodmares remain on site, I would have first dibs on her resulting foal come Spring.

A few broodmares went to their new homes, and soon enough, I was offered to purchase the mare in foal (a kind of two for one deal). Despite the Boyfriend vigorously chanting me on to do it, I took the time to mull the proposal over and in the end, respectfully declined for a variety of reasons.

First off, I'm not a breeder nor do I have aspirations to foal a mare out (especially in our area where Emergency Vet care is non-existent), as well as the fact I lease property (as well as feed hay all year, so think of the added costs there), and lastly, the mare herself was only breeding sound due to a pasture accident. I felt that with all of these items combined, I had to walk away. It was tough, but it was the responsible thing to do, especially if I felt that care would be compromised.

And despite several people telling me to "just sell the mare after", I don't think I could ever do that. After having Suzie, I have become acutely aware of just how much horses can be passed around - as a sound and (mostly) sensible horse, I was Suzie's 7th registered owner. Who knows how many people she got passed around by who didn't register themselves on her papers.


So, with considering the financial strain of owning a non-riding horse and my own moral feelings on buying and selling right away, I chose to walk away.

Don't despair tho, because the breeder found all of her broodies excellent long-term homes - including my favorite (who is actually only 45 minutes away now!).

And of course, like the stalker I am, I reached out to the woman who purchased the mare to let her know I was interested in the resulting foal. Which, obviously is the whole reason she bought the mare in the first place. Despite this, she offered the mare on a breed lease and I went to work on figuring out the logistics of shipping semen, etc, as the stallion had since relocated to Alberta.

It all made my head spin and I hit roadblocks at every turn - first the stallion was not yet being collected, then the Vet I had hoped to use wasn't doing AI anymore, and the list goes on.

Before the New Year though, I had reached out to a few of the remaining broodie owners and had basically told them, "If a foal hits the ground, let me know."

I didn't hear from many of them, as there weren't many broodmares to begin with, and very few wanted to part with the resulting foals once they had hit the ground.

I honestly didn't expect to hear anything, as it seemed as though this whole baby adventure was to be for naught.

However, on May 12th (poetically enough, Suzie's birthday), I received a message through Facebook that read, "She's here!" 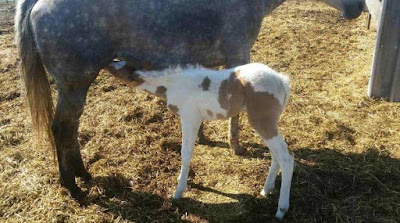