As I eluded, what followed the BVX was a lot of let down time for both me and the mare. I gave her a few well-deserved days off before throwing on the bitless bridle and doing a bit of toodlin, mixed with some stretchy trotting. She felt good, not at all sore or as tired as I thought she'd feel. The mental aspect of the BVX can be draining, which was the case when I took her to the BVX in 2017. With that in mine, I had upped her feed intake and calories for a few weeks prior to leaving, to prepare for the inevitable weight loss that would occur. Much to my surprise, she came home looking great once she let her belly down and relaxed. 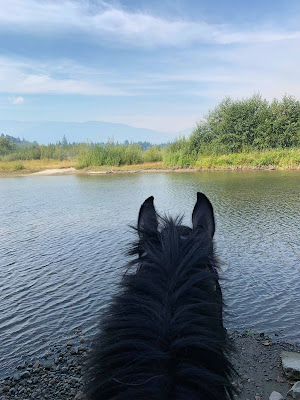 Once home, I did have the opportunity to attend a final, more local show... but I kinda looked through the show book once and didn't open it again. Mid-August horse-show-burnout is real, ya'll.

So, with empty entry paperwork sitting at my work desk, I chose to do what any logical person would do.

I went for a 10k trail ride with a friend, on a loop that I hadn't done in several years. It was the perfect day for a ride, and Annie was more than content to plod along, pulling Spud along with her (one of the reasons I chose to do this trail is because it is wide enough for Spud to be ponied).

We continued with the trail riding trajectory, and enjoyed some more ponying time with Spud and catching up with friends while we let our horses maneuver the rocks and dirt beneath them.

I had nothing in mind to work on, and my carefree attitude was only manifesting because I was gearing up for my first out of country vacation in 5 years with my soul-sister. Being gone would mean time off for the ponies, and instead of working hard, we chose to simply enjoy eachothers company and work on other aspects - like riding over varied terrain, water crossings, etc. But mostly, just catching up with friends, haha.

My trip came and went - soon I was back home and like any real equestrian, I climbed in the saddle the very next morning and ponied Spud around the subdivision. Annie was foot perfect, and I even had to cajole her into a canter down the long dirt road like a small child who had just learned how magical the canter is.

Throughout the period after the BVX, I also shifted my focus to Spud and working towards conditioning him to his new cart since the addition of the weight threw him off a bit initially. He's working quite well in harness now, and is learning the weight distribution of the cart and how he has to use himself now. He's still on moderate trot-sets, as I want to do this methodically and carefully to prevent any kind of muscle strain or otherwise.

I've also started to incorporate some lunging into our routine, but lately the rain has been so terrible that I lack the motivation to stand out in the elements and watch him go in endless circles. It's a good alternative tho, because sitting in the cart I'd end up much wetter than standing!

Of course, this recap wouldn't be complete without some kind of Annie-induced injury which required a vet trip, so I leave you with the image below. A post detailing that very scenario is coming shortly - but until then, give me your best answers at what you think happened!

(She has since made a full recovery with 0 complications :) )
Posted by Cathryn at 1:30 PM