Another Day, Another Trail Ride

Once again I have a back-log of posts to get through, but with the days getting longer, I find myself outside or doing *something* until the waning hours of daylight. It's been good though, I've managed to get a decent amount of saddle time in, despite a semi-planned/unplanned week-long vacation for Bannie.

The day after our Clear Round/ Percentage Day adventure, I had another fun little outing for Annie planned. In the spirit of getting out and doing things (with other horsies), I had teamed up with V and Geronimo and trailered out to a local cross-country skiing venue that doubles as hiking, biking, and equestrian trails in the Summer.

I have ridden sections of the trail in the past, but haven't been there in... 10 years?

Quite a bit has changed there, with all the logging and additional service roads. While it is only a short 30min drive on the highway, I never really followed through with any hard plans to ride there for no real reason other than laziness. When I first got Annie, I was nervous about hauling out to new trailheads and partly concerned about how she would do with a mass hoard of other horses. We had only ridden in groups of 2-3 horses, so this would be a pretty big change. The semi-ironic part is that our local trails are much more difficult than the questions asked at the Onion Lake ski trails.

Regardless, I was super excited when V asked if I would like to join a small outing of 5 and I jumped at the chance, knowing full well the extra riders and V had plans to only walk and keep it low-pressure and calm. Which works well for me, especially since I knew a few of the horses attending were trail pros. 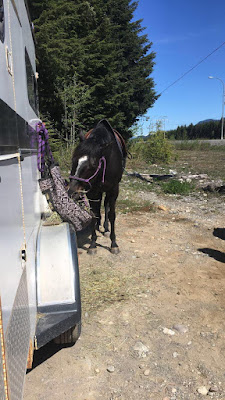 We hauled out Sunday, mid-morning and in good spirits. Annie was a bit of a PITA to load, mostly because I forgot to open the front window (when she loads, she'll stick her head out the window and look around). We got it done though, once I realized my error and we hit the road in good time.

I pulled in and parked, close enough to V's rig, but far enough away I could tie Annie on the same side V had her horses on. I was concerned Annie would be a bit dancy if I tied her on the opposite side and she could hear (but not see) the other horses. With being barely 20ft from the highway, I didn't want to take the risk and wanted to make sure she was comfortable, quiet, and unperturbed.

I honestly didn't need to worry - she unloaded, looked around with mild interest at the other horses and immediately dove into her hay.

Unfortunately, there was a bit of a snafu in regards to the meeting spot for the remainder of our trail buddies which included a 40 minute wait for them to untack, reload and head back up to where we were at the trail head. It was good though, because it gave the horses time to just chill, snack on some hay, and soak up the morning sunshine.

I tacked up and went to pick out Annie's feet and felt immediately that something didn't feel right. Her front right had a small amount of swelling near her fetlock, and although it did not appear to be extensive or serious in nature, my gut reaction was to either pack up and head home, or to slather it in some DIO liniment, wrap it, and head out for the walk ride.

I opted for the latter after discussing with V, and we both felt that Annie would be just fine for the walk ride, especially since it would be a flat and easy ride.


We headed out and had a pretty good ride - Annie had no issues with the herd of horses we went out with and went along quietly and calmly. There were two instances wherein she lost her noodle a bit, but it had more to do with impatience than anything else.

There was a small section where an entire tree had fallen across the access road and we had to engage a bit of 4x4 into the mulchy side section of trail, but needed to do so one at a time. Annie was not on board with waiting and declared so, but other than bulging and rooting, she didn't pull anything crazy. She fast-walked and didn't pay any attention to her feet, so tripped a bit trying to catch up to the other horses (even tho there were horses behind us...).

Overall though, it was a huge win. She was quite well behaved and I was pretty proud of her - most of the ride was done on a long rein and she happily plodded alongside several of the horses, but did show her preference in walking alongside Geronimo, so we mostly walked together.


Back at the trailer, I stripped tack and her wrap to check her leg. The swelling was completely gone, which was pleasing to see. I had intended to give Annie 5-6 days off after the weekend, as we had been going pretty steady thus far and I felt like a bit of an extended vacation would be good for her (and I!). I suppose Annie wanted to make sure she actually got her vacation, haha!

The next week consisted of cold hosing, SNM poultice wraps, and lots of hand-grazing. The swelling stayed quite small and disappeared on Day 2, before coming back on Day 3 and disappearing completely on Day 4. I can't really determine what she did, but she must've strained something or bumped something because I couldn't find any wound and she was only slightly lame for a day.

Since then, I've managed to put three rides (1 hack, 1 trail ride, and 1 low key school) on her and she feels great and the leg looks great, which is excellent news since we are scheduled to head to Trainer K's this up and coming weekend for a very full and busy Ladies Riding Camp! It will be my first year attending and I am so excited!
Posted by Cathryn at 10:18 AM