A Trail Ride in Pictures

You guys have seen our previous trail ride in short, repetitive GIFs. Now it's time for a pictorial exploration of a trail ride from last Wednesday, and a bit of pictures from my drive on Spud on the Thursday!


I had been wanting to go out for a longer, more technical trail ride for the last few weeks, but I am a bit too nervous to go on my own. Wild animals like bear and moose have started to come out of the wood work (both literally and figuratively), and trail riding off into the forest with limited cell service seemed like a poor decision to make alone.

Thankfully, any time I message V, she is pretty much down with the idea to wander through the wilderness. We set a day and met up after work on last Wednesday with the idea to check the Ecological reserve trail, which branches off to the river and eventually back down to my barn.


I decided to throw on Annie's bitless bridle, hoping I wasn't making a fateful choice. But in all reality, the ride was pretty much uneventful, aside from one instance I was pretty certain I was going to go ass over tea kettle (I had kicked out of my stirrups, and we had gone down a bit of a dip which had a small water crossing running through it. As we came up the other side, I was swinging my legs to and fro, enjoying myself. Annie must have forgotten that V's dog had joined us on the ride, and when he came bustling out of the bush and sprinted through the water, she spooked hard and whirled around to see what the heck was chasing her). V had laughed that Annie must have been sleeping (she was that calm and quiet the whole ride haha) and had forgotten about the dog.

It was a bit of a longer ride than we had initially planned, as the one trail head was completely flooded a few minutes in due to beavers damming up the area. We had to completely abandon that trail section, retrace our steps back down to my barn area and cross a low spot in the river - the entire process of having to turn back and find a new trail head added about 40 minutes to our overall ride time.


It was nice tho. Aside from the spook due to the dog, she was wonderful. Even when V's mount was being a bit of a naughty boy.

Overall a nice long, quiet ride in the woods with a good friend. What more could you ask for?! 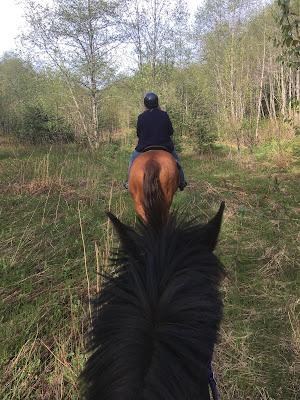 Spud also got out for a nice 4.6k drive, and we had some spectacular views as well:

#sorrynotsorry for the picture spam!
Posted by Cathryn at 8:51 AM