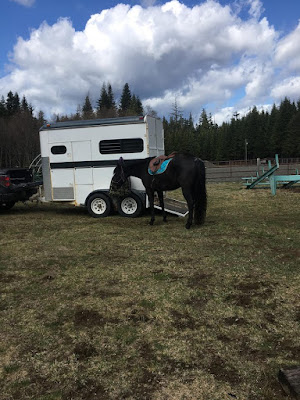 Since I have a few rides I still need to catch up on and a Dressage clinic this weekend, so I figured it would be smart to lump everything together lest I run out of time to document everything accordingly!

That being said, the day after our nice, long trail ride, I was more than a little excited. With it being Good Friday, I had the whole day off and the weather was just perfect - prime "outside activities" weather. So it made sense to me to play pony for a prolonged period of time - which is why I decided to haul to the grounds and bring Spud and his tack/cart as well as Annie and hers.

In fact, I was so keen that I also had stopped by an Executive of the Fairground Society's home to pick up keys to the jump container. Back in my 4-H days we used to pull the jumps from the container regularly, but as the club disbanded due to lack of interest and time, the jumps have sat collecting dust. So long as you are a member of the Fairgrounds Society and are in good standing, you are welcome to borrow the keys and use the jumps... provided you put them away afterwards, of course. Which, is all fine and dandy except when you are alone and the jump container is a good 70ft away (give or take), it is a bit of a PITA dragging everything out only to have to drag it all back again.

But, I shouldn't complain. We could just as easily not have access to any jumps.

Anyways, my intention was to play around with some jumps (obviously), to get more comfortable and familiar with the feeling, the distances, and to play around a bit with Annie's responses. For 90% of her "jumping career", I've only done so in a clinic format. Having an instructor there has it's benefits, but it also prevents me from thinking on my own. Whenever I go to a clinic, the act of jumping feels foreign to me as well, since we don't do it often at all outside of lessons. It takes a few jumps, or sometimes an entire lesson, for me to feel "on it" and well prepared.

When we arrived to the Fairgrounds, I had already been doubting my decision to work both horses, but remained stubborn and threw on Annie's saddle before tacking up Spud. I decided to work Spud first, so that I wouldn't be sitting in sweat for a prolonged amount of time (#ridingishard) and because I wanted to see how Annie would handle being tied to the trailer while watching Spud wander off. 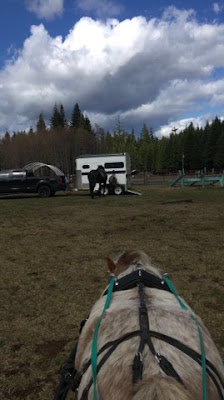 I did move her to the opposite side of the trailer so she could watch us better, which certainly made a difference. At first, she was not very happy, but settled into it and ate her hay quietly. She made sure to pivot enough to keep a wary eye on us, but otherwise was just fine. A loud set of motor-bikers had crested one of the hills at the Grounds at one point, which startled both horses, but otherwise it was a quiet afternoon.

Spud felt really good - much less opinionated than he was last year (#nobrakes) and happily went to work. He was a bit speedy and flat, but I expected just as much given the time off. We did a variety of figures, including lots back-swinging walking and slow/fast trot. He hung a bit on my right rein, which he does often, but it didn't seem too noticeable in the big meadow we schooled in.

We finished up with some tight turns via verbal cue and he did really well. His right turns aren't as polished, but they've always been a bit tougher for him to execute smoothly. Still, he did all the things and I was pretty pleased.

As I was cooling him out, I had the brilliant idea to have Spud carry all the jumping stuff to the arena for me. Annie #lostit a little bit when we disappeared from sight, but kept her brain hamsters in long enough for me to load poor Spud with four plastic standards, poles, and associated jump cups. He didn't seem to mind tho, and happily led behind me pulling all the gear. Annie, however, was verrrry suspicious about Spud and his newly acquired appendages. So, I had to untie her so she could sniff everything and not be a giant wimp.

I brought both horses into the arena, off-loaded Spud, untacked him and turned him loose. Annie stood, tied to an arena post while I moved the jump set up around and lined up some trot poles.

At long last, I threw her bridle on and was able to swing a leg over. We had a really good warm up - she was not argumentative in the least and seemed happy to go straight to work. After a series of walk-halts and a few TOH's, we went into some walk-trot transitions, as well as a few trot serpentines like we had done at the Anthony clinic. I remembered to not ride her into the rail, worked on preparing her ahead of time, and it went really well. She didn't resist to my aids like she had at the clinic and seemed happy to be notified of changes ahead of time (whodathunk?!). We did a quick canter in either direction, working hard on having her come back to an active trot.

A few loops down towards the jumps to run through the trot poles and I hopped off to raise the one jump to a large X and the other to a vertical. I mostly concentrated on the X, but had to get off again after I realized I had placed the jump much too close to the arena fencing and it made it difficult for Annie to gather herself in two strides and turn right after. And since my intention was not roll-backs, I moved the jump another two strides back.

Overall, it was a really productive school. I was able to make some executive decisions as a rider, understand how Annie would respond, and how it impacted the fence overall. There were a few times I sat to the fence, realized it would be a gnarly chip and just sat there... and there were other times I held or pushed for the distance. And it worked out really well.

Annie was just bounding over the jumps regardless of my mistakes and it gave me a really great opportunity to fiddle around and make adjustments. In a lesson setting, I get nervous and don't want to make mistakes so my go-to is to either under-ride or over-ride. In this setting, I was able to process the information and figure out what kind of canter I needed and when I needed to ask for more gas (or brakes).

We did pop over the vertical, which made me pee my pants a little. Annie was great and just hopped over, but also knocked it slightly and the pole clattered to the ground. And me, being the lazy rider I am, refused to hop off again to reset it. So, there it lay.

We played around with the X in both directions and finished off after a particularly nice distance and jump. It wasn't a long ride, but it was quite productive. And unfortunately, the arena was a bit gunky from the previous day's rain so I didn't want to overdo it either. It worked out tho, because Annie was keen to be done. After I walked her out a bit, I stripped her tack and set her loose to roll in the arena sand (her favorite).

Unfortunately for me, the work was just beginning. I decided to use Spud's cart again (sans Spud) and loaded all the jump gear into it. Which was fine, until I tried to move it through the wet, thick sand. Yah, not so great.

I managed to get it done after sweating, cursing, and wondering why in the heck I was doing all this work. I got the jumps back into their container tho, and felt accomplished until I turned around and realized I still had to load the horses, their tack, and Spud's cart.

I got it done tho, and man was I happy to get home and shower, haha! It was a long afternoon, but I felt pretty damn accomplished.

The next day however, I was not feeling as keen and gung-ho as I had the day previous and opted to get Spud out for a distance drive solo-style. He did really well, although the drifting to the left and the hanging on the right rein was much more evident. I did some work on correcting that, and we did quite a few series of long-trots through the subdivision. Overall, it was a pleasant drive and Annie didn't seem to mind being left at home.

And as if I'm not crazy enough, Sunday it was absolutely pouring. So I did what any sane horse-person who has a fat mini would do. I went jogging and drug poor little suffering Spud along with me for the 4.8k.

Don't feel too badly for him tho, he didn't even break a sweat.

The rain stayed around for a few more days (today is actually the first sunny day since), and yesterday I was able to swing a leg over Annie and do a quick hack around the subdivision before the rain started again. And thank goodness, because it absolutely poured once I got home from the barn!!

Overall, it was a quick hack. The wind was blowing hard and Annie felt... meh. Not really hot, but not really calm either. And not really... paying attention? She was happy to look at anything and everything but had a really hard time focusing and working with me. I got a bit flustered too, because I had plans of a nice and light stretchy ride and she had no interest in stretching or slow-paced work. Any time I reeled the reins out at the trot, she kinda surged forward, happy as could be.

We spent a lot of time at the walk and I really established that work in the contact did not mean we needed to trot off (every time I picked up my reins from loose rein walking, she was happy to bounce into the trot, haha). And every time I felt her get ready to trot when I did not ask for it, I'd dump the reins at her like, "Nope, we're stretching now!!!"

She got it together at the very end of the ride and we had a few reallllly awesome canter-trot transition. She also felt incredibly steady towards the end, and I could actually feed out my reins without her marching off. She got many good girl pats and a few carrots for her efforts, of course. I'm not really sure what her deal was, because she didn't feel fractious, she just felt... distant? I can't say I really blame her tho, because at home, the wind was so strong it uprooted our neighbors tarp-tent contraption and had blown it over his fence and left it rolling around in the greenspace behind our properties.

Regardless, I'm still counting the ride as a win because altho she felt like a child in at Disneyland (looking at everything, not paying attention, didn't hear what you said), she got it together in the end and even in the earlier stages of the ride she was rideable. Altho... kinda frustratingly so, haha.

I'm hoping to get one more ride on her before the Dressage clinic this weekend, so wish us luck that the weather stays in good spirits so we can do just that!
Posted by Cathryn at 10:04 AM