As the Seasons Change 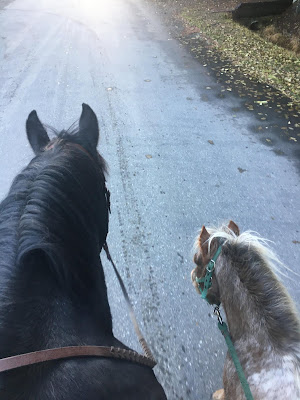 It is no surprise that come Fall, our small town rapidly ascends into the season of monsoons. We luckily escaped most of them in September and for a period of October, but battling the constant wet has made it difficult to get any kind of real riding in.

The pastures are soggy, soaked to their core with an excess of moisture that causes the top layer of grass sproutlings to slough off as the horses walk from one end of the pasture to the other. I thankfully don't have much in the way of mud, as the pasture slopes to drain the excess run off away from the lean-to and subsequent shelter.

The riding arena is a heaping mess though, despite the significant amount of drainage installed last year. I mean, there is only so much draining it can do when the forecast calls for days upon days of 30-50mm showers.

I've been kinda taking it easy though, still coming to terms with everything that happened only three short weeks ago. I haven't felt much like riding still, but have taken opportunities where I feel strong and determined to play with some ground-work and even lunge Annie a bit.

The season is over for us - soon the roads will be too treacherous to drive on hauling a trailer, and the pastures will fill with an obscene amount of snow just like they do year after year. Schooling will become non-existent until 2019 and hacking the subdivision will be sparse unless the roads are well salted to prevent slips on hidden ice.

I am determined to get a few more rides in - nothing serious and nothing too far-fetched. Just enjoying my horse and enjoying the partnership we have built. Annie and I have had a very busy year, and we both deserve some down time to just enjoy one another. And the impeding Winter makes that pretty easy.

That being said, there are a few more rides I haven't blogged about yet. One of which was prior to Ella's passing and the other two were a short time afterwards.

I remember our ride on October 16th as crisp - the air had a tinge of winter bitterness in it, but the sun managed to disintegrate the cold edge. Annie was great to hack out, and although we only ended up hacking around the subdivision, we were able to throw in some really good work. Most of it was leg yielding, as well as serpentines where the footing would allow.

I was really happy with her at the end of that ride, mostly because for the first time since I have owned her, she foamed willingly at the mouth. It surprised me, mostly because she is quite "tight lipped" even when eating food that she doesn't easily foam or produce excess saliva. She felt good though, and we alternated between trotting along in a frame and allowing her to stretch her neck out. It was a great ride, and afterwards I cleaned my tack and took my time shining up my boots. An afternoon well spent, no doubt.

The next two rides were after everything that had happened, and the first ride was more or less to get myself back in the saddle sooner rather than later. Grief has a funny way of making us avoid or feel bad about enjoying the things we love to do, so instead of pushing it off for another day, I made myself tack up and swing aboard.

I remember Annie was a bit spooky when I first headed out, but I didn't really blame her. The new park that was going up had changed quite a bit since we last rode by it, and she stared at it hard before cautiously continuing. At this time, she hadn't been ridden in well over 10 days, so I forgave the little bit of excess energy.

Not too soon after passing the park, she was back to her business-like self and plodded along quietly. Unfortunately, I was having a very tough time just sitting and relaxing. So we did a bit of a school - alternating between 'extended' trot and a more collected trot, asking her to stretch down through her topline, etc. It also had to be a bit of a quick ride, as Kelsey was coming to check the fit of my saddles one last time for the year. Thankfully, both saddles were fitting just fine and we had a good chat about upgrading my jump saddle sometime next year and what kind of saddles to look for.


It was a good ride - a ride I needed. I needed to get my mind off of everything and I needed Annie to just say "You want this/that? Ok, let's do it." And she dug in, did everything I asked, and took care of me.

When I slid off at the end of the ride, I thanked her profusely for being such a good girl. At the time, I don't think my brain could have handled a wirey, hot young horse, so I was thankful she was a steady rock despite her time off and lack of work in the past weeks. I really shouldn't have been surprised tho, she isn't naturally a very hot and energetic horse - but in the same breath she has played that card a few times in the past.

Our last ride together was on Hallowe'en. My brother was up visiting for the week and when he saw me looking out the window at the clear blue skies, he offered I should go and ride my horse. I'm glad he did, because I was waffling between being a good hostess as well as trying to bargain with myself I'd go "another day".

I took Spud as well, and ponied him from Annie. Both horses were super, and we did manage to do some trot sets where we could. I didn't really push it though, as both are quite out of shape now. It was also hard to maneuver them when we trotted, as Spud found it absolutely necessary to casually trot into Annie to push her over. Poor mare got a little bit pissed when I insisted she trot straight and ignore Spud's attempts to move her - she ended up pinning her ears at Spud and he slithered away, but ended up attempting it a few more times, haha. Little stinker!

All in all, it was a good ride and we finished it off with a little bit of bridleless again. I pulled the bridle off a few feet away from the driveway, and Annie happily walked home, casually observing some Hallowe'en decorations the neighbor had put up.

Since then, I've mostly been unable to ride due to the terrible weather and my new work schedule (oh and that darned daylight savings time!!), so I've spent time grooming, hand-walking, and lunging instead. Since it is my birthday this weekend, N has already planned to kidnap me for a ride - rain or shine (and we both know she means it!).
Posted by Cathryn at 11:03 AM

Email ThisBlogThis!Share to TwitterShare to FacebookShare to Pinterest
Labels: after ella, catch up, riding catch up