After riding with Heidi, Annie and I plugged in one more schooling ride (on Sept 25... see how far behind I am?!) just before she would be heading to a chiro/massage appointment. The ride itself was good - we worked more on trot/canter transitions and trying to implement some of the things Heidi mentioned. Her canter felt really good, which was nice, so I didn't spend a lot of time drilling things into her so we rode pretty lightly before heading home.

I had booked Annie and AJ into the chiropractor for Thursday (27th) morning since I needed to drive my sister to the airport anyways. The poor ponies had to get up a wee bit earlier than I'm sure they thought was humane, but loaded up quietly for the trekk. Unfortunately, we were still pretty early for the chiro so I caught some sleep in my truck while the horses borrowed a friend's set of stalls for a few hours.
Both horses got adjusted and I'm happy to report that Annie, while out, wasn't particularly terrible. A few adjustments to her hind end and her sacrum like usual and we were off and running. I was happy to see that she hasn't continued to rotate her pelvis like before, so she didn't require that invasive adjustment. The chiro was super pleased with how she looked and even commented how much she has blossomed into herself. I laughed and reminded her, "You did say she'd look like a pencil until she turned 6 and you were right!!"

Amanda, the chiro, recommended a day off before resuming regular riding activities so Annie had the Friday off and we went back to work Saturday.

Our last three rides had been pretty intense schoolings, so I wanted to drift away from the ring for a bit and throw in some good old fashioned hacks and trail rides to mix things up a bit. I find riding in the ring day after day stagnant, plus it is a lot of hard work for Annie and I, who have to hack a total of 40min just to get to and from the ring itself. With no other places to ride in a ring, we try to get there as often as we can, but sometimes I just can't be bothered with the long 20min walk there and 20min back.

So on Saturday, we did still plug back over to the riding grounds... but instead of riding in the ring, I grabbed a half-rotten log from the side of the tree-line and dragged it into the open meadow in front of the ring. It was pretty small, about 1' high and maybe 5' long... not good for much but perfect for just playing around with. We did lots of trot/canter transitions and did quite a few loops over the log, asking for a change in direction (and lead). She was mostly good about this, but I could feel she had that pained behind the leg feeling. I was proud of myself tho, because I usually just let her carry on with a sedated pace and we end up chipping our distances, but there were several times I gave her a good squeeze or boot and she ate up the distance and made it to the "fence" perfectly in stride.

It was a good exercise for the both of us, because I haven't 'jumped' her since the last Anthony clinic in June and I was itching to get her over some sticks. Plus, it mixes it up for her to have a new object in the way. I was pretty pleased with her - she did really well with our alternating loops. She did try to drift back towards home a few times in the meadow, but I just popped her back over with my outside aids and she was good.

Once we finished playing around, we did the trail around the fairgrounds. I treated it like a mock x-country run and trotted/cantered where I could. She was super, and although didn't offer any lead changes, when I brought her back to a trot and did a simple change she complied when needed.

She was great about going up and down the hills at a steady canter, altho I was probably more winded than she was. Seriously, how do eventers do it? Haha. The change in altitude across the trail made me painfully aware just how out of shape I am, and poor Annie just plugged along while I tried to ride in a somewhat effective two point and just let her do her thing, haha.

After that, we simply cooled out riding home and mare got many cookies for being a good pony!

Our next ride was Sunday, and after being busy at the lot and doing Grown Up Things, I was itching to ride. I had offered to ride with a friend, but she ended up not being able to come and it kinda worked out in a weird way because I am an idiot. I said we could ride at 7:30 together... and when I headed out I ended up having to turn back because nightfall came QUICKLY. We ended up having a very short 20min ride wherein Annie was prettty sure the shadows were going to kill us all. I'm glad I didn't drag my friend out for a very short and kind of insane ride, aha. She was a good sport about it tho, and even when I had to navigate in the pasture via phone light to turn them back out. I love Autumn, but I don't love how early it gets dark :(.

I was better prepared on Monday tho, and had another friend lined up to ride with me in the afternoon. We were going to do a decently sized trail ride and I had hoped to expose Annie to more in the bush and what "real" trail riding is all about without her feeling panicked or unsure. A lot of our trails are old, open logging roads. And we have just as many enclosed 4x4 trails that are quite grown in and narrow. These paths are a lot more technical than your average logging road, and they are what I truly consider "trail riding". Lots of water crossings, mud, fallen trees to step over, alternating walking conditions (sand, mud, rocks, etc), lots of hills, weaving through trees, etc. It's the difference between driving your car on the road vs off roading in a lot of ways, and it makes some horses kind of backed off.

Annie has been pretty good about it, but I am not confident to go out alone, esp with all the bear activity around. It's best to go with a more confident and tried and true partner, which we have done several times over the year. Plus, trail riding with friends is so much better than going alone anyways. 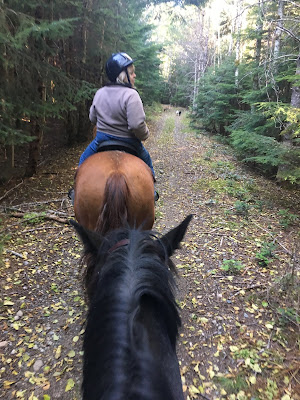 It was a bit of a chilly day, but the sun peaked through the trail in several places which warmed us up well. It was a nice ride and we took some paths I hadn't been on in years - I didn't have a huge amount of courage to attempt old trails I wasn't sure were still useable. It was fun to wander the old trails tho and they were in pretty good shape.

Annie was pretty hilarious when we rounded the one corner and met up with Geronimo - she adamantly attempted to sniff his butt for several minutes into the trail until she decided she was over it and everything was a-ok.

She did really well for the most part, and only got kinda goosey feeling when we had finished a water crossing and a random dog that had joined us trotted right behind Annie's hocks, breathing heavily and whining (it had wanted to pass us on the trail, but the trail was quite overgrown and she wasn't able to go around and instead... followed wayyy too closely). Annie kinda cocked her hip as she walked a few times, but didn't offer a kick, altho I wouldn't have blamed her if she did.

It took her a few moments to get herself together tho, as she tripped over a few logs and slipped a little bit in some mud. Once she realized the terrain was changing, she paid more attention to her feet and didn't mind following Geronimo a few feet back. I was pretty pleased with her, esp since our last trail ride she was a bit of a hot head for no real reason (other than wanting to be in the front).

It was a nice relaxing ride tho, and I didn't have to over-ride her or correct her. She knew what was up and followed. We let her lead a bit too, after yet another water crossing and Vickey told me to head right instead of going left (back on the trail we had just done). I made a mistake and instead of going right on the trail, I went right onto a creek that had dried up (it was been oddly warm here the last few weeks so a lot of things are dried up). Unfortunately, the creek was very muddy and unbeknownst to me, DEEP.

Annie walked OK for the first few steps, but then staggered, slipped, and threw out her neck to save herself. The mud sucked her up just below her knees, and she tried her hardest to get us to the side of the creek bed, onto higher ground. Unfortunately, trees outlined the sides of the creek so only her front half was up out of the mud. Vickey called out, asking if I was OK. I guess it looked like Annie was gonna go down, and to be honest, I thought for sure she was going to lose her footing and down we'd go. 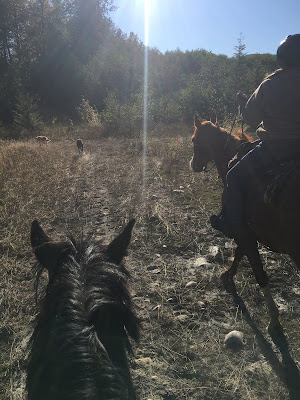 She held herself up and not only managed to clamber up the side (I did my best to direct her but I wanted to stay out of her way) and once we were able to get some traction, I turned her along the side and crossed back over to Vickey and Geronimo, who were waiting with a very gobsmacked look on their faces, haha.

So uhm, a billion points to Annie for saving my ass.

The rest of the ride went without a hitch, save for a random moment Annie got a bit goosey again. I'm not sure what happened, but it was almost like a cold wind blew up her butt and she kinda just leap forward, haha. I just told her, "Waaaa-aaalk." and she complied, back on a loose rein with no issues. No muss, no fuss.

I was pretty happy, esp during the spots on the trail we stopped the horses so Geronimo could have a breather (he isn't as in shape as Annie and has seasonal heaves so his air capacity isn't what it once was now that he is older) and instead of fidgeting around like she sometimes does, she just stood with her head low and quietly waited for us to continue. Good girl.

With that, I gave the mare two days off. I had planned giving her Tuesday (2nd) off, and on Wednesday (3rd), I had a course for work so was unable to ride that day.