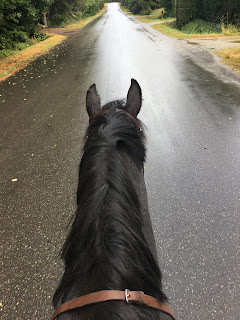 Weirdly enough, this Summer didn't see much rain. Being on the North Coast of British Columbia (with our little slice of heaven is firmly sandwiched between two of the rainiest cities in all of Canada) it was pretty uncharacteristic to not see any form of precipitation for weeks on end.

Unfortunately, the province of BC did not bode well with the lack of liquid gold we are so known for, as a vast majority of our province was swarmed with thousands of wild-fires (some of which still continue to burn today).

The change in weather has been a bit of a warm welcome tho, what with all the fires and unrelenting heat. Fall is by far one of my favorite seasons - the cooler weather paired with the crisp contrasting leaves makes for some beautiful scenery.

Mid-Friday afternoon, N ended up messaging me asking if I wanted to ride in the rain with her. I hesitated - only due to the fact Bannie still needed a reset - but figured with a farrier appointment (finally!) booked for Sunday morning, we'd be just fine.

We stuck to the regular loop around the rural subdivision, which is roughly 5-6km depending which outer-perimeter streets you add in.

Both Annie and AJ were happier than pigs in shit to walk along at a sedated pace on loose reins, which made for an extra pleasant hack around the neighborhood. As per usual, AJ sent Annie into a very fast and erm... heavy... heat, ahha. She kept a pretty good lid on it tho, and only mildly protested when we broke off at the end to head our separate ways.

Being a mare is hard, I tell ya. Especially when you're confronted by some serious gelding tail, haha.

Following the ride, the horses got their feet done on Sunday (wherein Annie was a bit of a douche, but not a total supreme douche... so win?) and I swung back up in the saddle the very next morning to a blue sky and sunshine.

The initial plan was to hack, but Annie decided to spend nearly 15 minutes fucking around at the barn once I mounted so I was pretty bound and determined we would be schooling and getting her egg's back into their basket. I appreciate the fact she is excited and happy to get out and about, but I am NOT keen on having a horse that tries to jig down the driveway and flip me the bird when I half-halt or ask her to stand quietly.

So we did a lot of circling, halting, dismounting and remounting before I even let her step foot down the driveway. As soon as I threatened her with lunging, she started to get her shit together and we headed out... finally. I took the opportunity to ask for halts and have her stand quietly, because #fuckyoumareidon'tcareaboutyourfeelings. She protested a few times (rooting and yanking the reins from my hands, attempting to walk off, scooting out from under me when I asked her to walk off...) and got a bit humpy once, but finally sighed when she realized I wasn't gonna let her walk all over me.


Once we hit the dirt road, she was back to her usual professional self which I appreciated but still didn't entirely forgive her, so we schooled down it at both the trot and canter. She was good - lazy, but good.

Seriously tho... only my mare can have a shit fit for 15 fucking minutes about wanting to go out for a ride and then drag ass during a canter down a dirt road.

We continued our way to the arena and once there, I was keen on setting to work right away. Hacking to the grounds takes about 20 minutes, so Annie was more than warmed up by the time we arrived. I had wanted to start chipping away at our cross-firing issue and applying the things I had gleaned while lunging over the last two weeks.

To summarize the ride - it was freaken fantastic. Mare was a bit disorganized and frantic for the first few minutes of the school, but otherwise went to work and did the thing. She did try to change in the back twice, but I kept a firm outside rein and worked on pushing her body to be straighter and walla, she didn't even make it past *thinking* about it.

I was super happy with her - she was quiet in the canter, responsive to the aids, and light in the bridle with enough pressure I could keep a working contact with her.

We played around with some leg yielding, 15m trot circles, 15m canter circles, "lengthened" canter and "collected" canter as well as quite a few (straight) canter transitions down the long sides of the arena. I am terrible for always asking in the corner (or making a circle to ask), and when a friend made a comment about having her own horse aware of which canter leg she is asking for by riding her in a straight line, I thought it was pretty genius. I wanted to start applying it and working my way to asking for counter canters, so thought it was a good idea as any.

Annie struggled slightly on her left lead, but quickly became receptive to which leg I was asking for and was quick to correct her mistake after that. I was happy with her tho - this straightness stuff is very difficult for her and the fact she was trying to meet me halfway was more than I could ask for.

We finished the school after a particularly pleasant extended canter down the long-side. I sat deep, asked her to whoa, and immediately hopped off to shower Annie with many good pony scritches and pats.

Once the good girl dance was over, I led her out of the arena, remounted, and we headed home. At one point during the ride home, I had to dismount to grab Ella (a woman was walking her leashed dog down the dirt road and I didn't want her to run up and disturb them) and upon remounting, I decided to undo my reins and hack home bridleless.


Annie was super - quiet and responsive to my aids as we went along. I also ended up dropping her bridle one turn from home, which ended up turning into a bit of a laughable moment... As we rounded the corner, we came face to face with a young girl crouched in the ditch catching little fish.

She said hello to me, so I said hello back and she took the opportunity to run over and show me what was in her bucket. Now, I trust Annie to behave when she is in a good mood, but I wasn't exactly sure how this would go over being bridleless and all, and was ready to dismount if the need arose. But, mare was perfect and instead of spooking, tried to drink from the bucket when the girl presented it to us, haha.

Probably not the smartest thing to do, but damn it was fun.
Posted by Cathryn at 7:00 AM