I am happy to say that the weather seemed to have leveled out after a few days of down-pour - we've had some pretty nice days with temps reaching uncharacteristic levels. I won't complain tho, the sun kinda makes me motivated to do things outside, riding included (how I wish we had an indoor sometimes).

Earlier this month I had been taking advantage of hacking on the trails, which came in good time since the last week and a half I have had to avoid the trails due to bear/wolf activity. In fact, a wolf was spotted at our usual schooling grounds just the other morning... so I had to be particularly careful about heading there. I don't really fear heading to the grounds much, since it is an open space but the crowded and dense trails leave me a bit less... bold.

I still venture them when there is company to be had, but when it's just me and my horses I tend to stick a bit closer to home. The animals are getting ready for Winter and I'd rather not run into a hungry or defensive bear (or wolf!), especially when there have been occurrences (approx 5 years ago) of bears chasing horses and ultimately killing a rider's dog who attempted to defend them.

So I kinda took the opportunity to hack out alone while there were still no real sightings or worries - I have been trying to keep it to one school (if not two!) per week where time allows, but I kinda let it slide in favor of enjoying the trails and playing around. So, following the really good school in the arena back in early September, I hacked Annie with Spud through the fairgrounds trail and around the loop which runs through the subdivision. I have been trying to be diligent in taking Spud out at least twice a week, since I don't always bring him with me when I ride Annie (I don't want her to get too used to him always being there either).

With this particular ride, we did a ton of hill work and even attempted some canters down the better maintained trails. Spud was NOT a fan of this, haha, and ended up giving me some whip-lash bc when pony doesn't wanna... pony will NOT. So, we stuck to a slow jog which was more like a fast trot in Spud gaits.

The ride was fun, quiet, and an easy 5k. Just what me and the ponies needed!

I am always so impressed how good Annie has been about ponying Spud - I kinda just threw her into it and she never really looked back.

Because of her good behavior and good schools, I gave her two days off and on one of those days, I ended up hauling Spud into town to drive on some old 4x4 trails and stop by the property. For those who don't know, the Boyfriend and I own 5 acres of untouched land pretty close to my old 4-H coach (and where I first boarded Suzie when I bought her). Anyways, it's been a friggen process to get the land ready and going, but the Boy and I have finally been able to get some things done (because everything costs money... SO MUCH MONEY).

As a largely unrelated side-note, but also kind of a non-official update on the land, here are many pictures to serve as fodder for those curious:

We had a contractor come and needed them to scrape and pull up the bad footing and backfill with good ground on the "horse's lot". (We have 3 properties all in a row. The 3rd lot which is about 1.5 acres is for the horses only). The spots where the properties are used to be an old swamp, so the footing itself is NOT good for building on or for ponies to be walking on. It's beautiful mulch and super rich top-soil tho... just not good for the purposes we need, haha.

In order to be able to get this stuff done on the lot without it costing a million dollars, we had to be selective, up-front and calculating of our wants and needs. As you guys will notice, the mulch/top-soil mixture is a giant mountain on the lot still, which will remain there for a while. We plan to screen it and lay the good top soil down where we want to grow grass, so no sense in sending it away and paying ($$) for it to be sent away and then brought back ($$) just as top soil.

Anyways, my little side-track is over. I stole the nephew and we drove some of the trails before stopping at the lot to check it all out and show Spud his future home!

So that was fun and kind of exciting!! More developments will be coming for the land, but it is done for this year as we want the ground to settle and such.

Following that ride, Annie and I tagged along with N and AJ for a 7.5k hack which was a lot of fun and Annie was well-behaved - even when AJ decided to lose his noodle for a few kilometers, haha. For a 19 year old, he is still pretty damn spry. The ponies mostly hacked around on the buckle and it served as a good opportunity to catch up and chat. Much needed!

Our last hack, before returning to the ring, was a simple 4k loop around the subdivision. Annie went in a halter-a-more, and I only questioned my sanity once. Otherwise, we toodled on a long rein and even managed to get a few minutes of trot in with Spud, who begrudgingly followed.

Of course, it didn't hurt that I provided everyone (and I mean everyone!) with treats:

My goal for the end of 2018 was to hit 400km logged into Equi-lab with Annie, and since I've already surpassed that amount, I'm setting my sights on 500! (To be fair, I believe I have passed 500km already, since I have missed turning it on for quite a few rides and also due to the fact I downloaded the app in late March.) 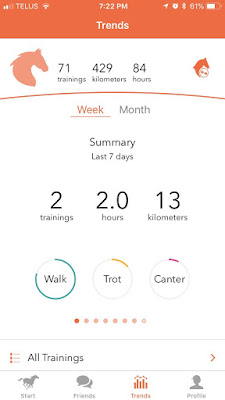 The hacking and trails have been good for racking up easy miles, not to mention it's been educational for Annie still. Because believe it or not, I rarely just "toodle" or putter around. We practice things along the trail like leg-yielding, TOH, backing up, halting and standing quiet, etc. There are always things to work on and I take the opportunity to play around with little things on these days.

Mostly tho, I'm just enjoying the heck outta my horse and slowly putting the miles on her. She feels different as this year is drawing to a close (which is something I will reflect on in another post), and it feels good. We've both worked our butts off this year, so the down time is welcomed. Of course, it doesn't mean we stopped doing our thang in the ring, because our next three rides were all flat schools in the ring ;) Something about balance and all that, right?
Posted by Cathryn at 8:50 PM