Ride a Test/ Fix a Test with Cat Armitage

Summer has just been insanely hectic and right when I started to catch up on blog posts, the Boy and I went on vacation to visit my family. Since returning, I've been playing catch up and slowly easing myself back into real life and thus, blogging has fallen by the way-side.

Once again, I am attempting to catch up, so here goes:

Following the Sven clinic wherein we started to establish forward means FORWARD, there was a scheduled schooling show in the area the following weekend. I had attempted to weasel my way out of it, simply because Annie wasn't really... fun to ride. Battling forwards on a horse that just didn't give a damn was frustrating and I really didn't want to head to a show and Pony Club kick my mare around the Dressage court.

Unfortunately, the show entries were suffering due to a few other shows going on in the area so some of the regular riders were not attending. My friend, who was running the show, messaged me and asked if I would reconsider entering and that the format of the show was going to change and become more of a schooling opportunity.

Basically, the show was going to have a schooling/lesson day prior to each phase. So for example, the Dressage schooling was on the Friday and the real deal would be on Saturday. Riders would have the opportunity to ride their test, have a recap/mini-lesson with the judge and then a re-ride. The following morning, we would ride our tests as per usual with no feedback from the judge. 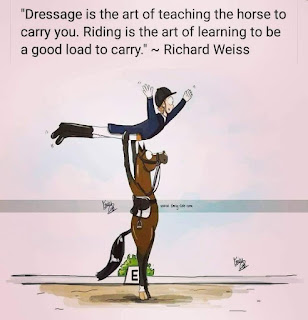 I was actually kinda interested in doing it, because I figured that maybe the Judge would have some helpful tips in regards to our forward issues too. I wanted this year to be full of schooling and lessons, and if I had the opportunity to do that, why not?

So, I signed up for a schooling session on Friday and three TL tests on Saturday.

Friday afternoon, I headed out for our lesson and warmed Annie up in the green space by the Dressage court. She felt resistant to my leg (again), and was definitely much worse behaved than she was in the ring at home. It felt like we hadn't had any breakthroughs in our training and the idea of going Forward was completely foreign to her. I mean, we haven't been tackling the problem head on for very long but it's almost like this whole Forward Issue is going to have to be rehashed again and again at each venue we've been at. Still, I stuck with it and booted her forwards off my leg. She complied, but wasn't happy.

A friend watching us called out that we needed more trot, and I was actually happy she did because she ended up calling me over and give me a bit of a pep talk when I floundered and told her I couldn't do it. Basically, she told me that Annie knows how to do The Thing and it's time to make her do The Thing. I'm not asking for Hard Things and it's time for Annie to meet me halfway. I might have to be a bit mean, but it's too bad.

It sounds simple enough, and obviously I try to apply it when I ride but sometimes get suckered into just going into auto-pilot and taking over for Annie instead of making her accountable. It was a good talk tho, she kind of got me amped up to Do ALL THE THINGS.

We headed into the ring shortly after the pep talk and ran through Training Level 2, as that was the one I chose to work on with the Judge (which, it didn't really matter which I chose bc it was going to be poopy no matter what). Being that it was 3 weeks ago now, I am having a tough time remembering how it all felt but I remember I was not completely enthralled with how it went (which, shocker... right? haha). There were some good moments - Mare got her leads, we did all the movements at the correct letters, our figures were decent enough.

But, there was no forward. 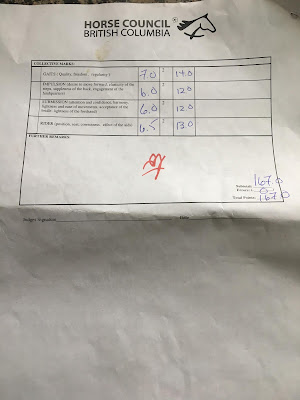 I had to boot her forwards a few times and after we completed our final halt and walked to Cat at C, I began to explain what our issues were. I was pretty embarrassed, and mentioned that I tried to ride as competently and quietly as I would at a show, but the blatant disrespect to my leg required a bit more of an escalation sometimes (ie. the kicking). Cat was an absolute doll and quickly agreed with me, telling me that she'd rather see that than a horse obviously sucked back and sticky. I thanked her and told her I had thought about not doing the show because of our issues, but figured why not go and just school it and beat her forwards when I need to.

Cat was pretty happy overall with the test - we did the correct things at the correct letters and our figures were pretty decent. She commented on a few times I let Annie fall in on the circles and noted that to stop that falling, I needed to get her forwards. She did comment on Annie's tail swishing at the canter and I nodded along, stating that it has come back since she has decided she doesn't have to go forwards anymore. Cat laughed and saw later on in the session that Annie's tail can be much quieter when she stops arguing and just goes to work.


We went straight to working on breaking the resistance in forwardness and surprise surprise, Cat was pretty similar in her tactics as both Sven and Anthony. Which, I kinda assumed as much but sometimes its good to go and have another lesson on it bc why not spend the money?

Cat definitely pushed us and Annie fizzled out pretty quickly since she had to do So Much Work and I ended up having to put my spurs on. We did a lot of transitions and spent quite a bit of time establishing a trot that was overly forward before bringing her back down to a more comfortable pace. The idea was that we wanted to get her going as fast as she possibly could to show her that yes, she can do it, before bringing her back to a regular working trot (which was our "fast" trot before, haha).

It was kind of an interesting exercise, because it made me realize that yes I can get her forward, but just how much more forward can I get her? And I mean, it's all building blocks and it's not like I need to push her to trot Mach 10 every ride, but it was important to stretch the forwardness and understand the resistance will creep up again even after we establish a good working trot if I don't keep pushing the boundaries.

We also worked quite a bit on my position and Cat had me hold a ruler that had a level bubble in the middle and challenged me to keep my hands even and only a certain width apart (she said I hold my hands too wide and often drop my left hand). It was very restrictive, holding the device, and I found it hard to keep my body straight. Interestingly enough, Cat said I should think of seeing a chiropractor because the issues with my left hand creeping forwards is because I pop my left shoulder forwards when I ride which shortens my right rein. Thus, uneven reins. Having to hold the little ruler and make sure the bubble stayed in the center while I walk, trotted, and cantered circles was VERY difficult but it also made me realize how fucked up my own body positioning is because I physically couldn't stop myself from reaching forwards.

In turn, we also found that I don't follow the motion of my horse's movement very much with my arms. It's mostly bc I have little T-rex arms tho and Annie has a long-ish neck, so I can't physically follow very well. Cat told me to think of cleaning clothes on a washboard and really push my elbows forward with Annie to follow the contact. It felt super weird and it felt like I was pumping my arms like crazy, but looking back in the video I am just lightly following Annie's movement.

What was supposed to be a quick 15-20min recap of our test and some pointers turned into a formal 30min lesson, haha. I was the last lesson of the day so I didn't really mind, but it burnt Annie out pretty quickly. Having to hold herself up and steer and go fast was a lot to take in and it burned through her fuel tank pretty quickly.

So when we had to go back in and redo our test with the adjustments made, Cat warned me ahead of time Annie was very tired (which I knew) and to not be upset if it wasn't a good test.

She was resistant, pissy, braced, and just... ugh. 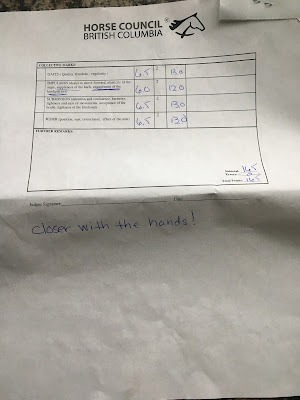 I mean, I get it tho. We had been in the ring for quite a while in the heat and I was making her accountable for herself and even when she got things right, we still didn't stop schooling. So, I kinda understood where the horse was coming from. Because, yanno, I'd be pissed too.

She still did all the things and didn't toss me, so I guess that's a win?