Following the show, I left Annie off for two days to rest and recoup. On the Monday, she grazed in the front field dragging her lunge line (like she often does). On this particular day, she seemed kind of disinterested in the grazing and more concerned about where Spud was, which is pretty unusual. Typically, she could give two shits, but I didn't pay it much mind since I was repairing the boardwalk at the back of the property that is used to dump manure into a large gully. I glanced over once or twice and she seemed fine, and with all the hammering I was doing I didn't really hear anything alarming.

When I came around to the front and saw Annie much closer to the barn, I thought it was a bit weird but again didn't really pay it much mind. I grabbed her, doused her in fly spray, dumped her mash in her bucket and left for the evening like normal.

Tuesday morning I rolled out early for a ride before the heat and found that Annie's leg had ballooned and was mildly lame at the walk.

After some searching around the area, I found a rope burn along her fetlock. I assume during the time I had let her graze in the front dragging her line, she must've gotten it tangled somehow and maybe spooked(?) and gave herself some rope burn. Fortunately, the wound was superficial but the swelling in the leg (as the days went on) suggested perhaps a mild tendon strain (from what friends and I assume was from kicking out at the line when it wrapped on her leg).

I realize a lot of people will shake their heads saying what I did was pretty stupid, but this is something Annie has done dozens of times in the front paddock while I do chores and even clean up my tack room in the barn. I have had the area in the front hot-taped for a while now, but was waiting on more hardware to complete the entire thing so I could actually leave her there to graze for a few hours a day since it is not attached to the other paddocks and I have no desire to fully fence it off (not my property). And, FWIW, I do feel stupid about it.

Anyways... I went straight to work on the swelling and wound which meant a lot of cold hosing (2-3x a day), as well as icing, poultice/compression wraps, NSAIDs... the whole nine yards. The SO and I were leaving for vacation on Saturday, so I had five days to get the leg to where I wanted it to be before I left. I had a friend watching the horses for us, but didn't want her to feel obligated to wrap my horse, esp if I could get the leg to a much nicer place before leaving.

Thankfully, I was able to get the swelling down and the wound was looking just fine. She was still lame at the trot when I left, so I made sure some of her grain baggies had NSAIDs in it but otherwise knew the leg would just need some R&R.

Upon returning, Annie was 100% sound and although there was some mild puffiness in the leg (friends and I actually think it's moreso to do with standing around for 15 days straight in some very high temps since we have been having massive heat waves and since being ridden again, the puffiness is gone), all was well and I began riding her the day after getting back. I've been cautious about the amount of strain I'm putting on the leg, as I don't want any repetitive strain injuries but otherwise, it's business as usual.

But this post isn't all about the horse and both of our my dumb decisions.

It has been officially official for a while now (since mid-May, actually!), but the BF and I officially adopted Ella.

That foster dog I was supposed to rehome?

A few friends have said they "called it" from the beginning and I hesitate to say they're right, simply because when we signed the adoption papers it wasn't 100% for my benefit. I mean, time changes things, but the whole kit and kaboodle was moreso done for the dog.

This dog is obsessed with me.

And I don't mean that in a "Oh my godddd she is my best friend!!"

I mean it in a "She ran away from Jamie and disappeared for an hour because I left and went to a horse show" and in a "She creeps me from the bathroom everytime I shower or bathe" and also in a "She'll stand at the door and sing me the song of her people when I leave her behind."

So. I just didn't think it would be productive for her life to have yet another change if and when someone decided to adopt her. She made her choice very clearly and I can't force her to go through another round of "getting to know you".

So, she stayed and we signed the papers.

And then kind of a funny thing started to happen.

She started to do these little things Ty used to do. She would run back and check on me during hikes, she would lay at the foot of the bed (as opposed to up by my head), she would play hide and seek with me...

Whether or not it's because Ty came down in his All Knowingness and told her "Look, they signed the papers, so get your shit together" or something else, but it's a bit uncanny and weird for me.

I'm slowly starting to let her creep a bit more into my heart, but it's guarded and she knows that. Still, she gives me nothing but all of her.

Welcome to the family, Ella. 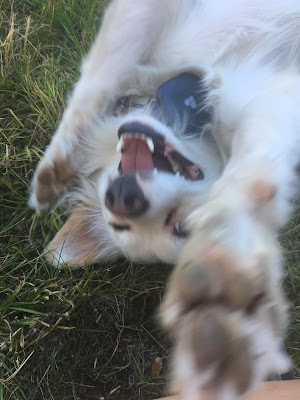