I rode mid-morning on Day 2, which meant I was able to leave my horse trailer hooked up for the evening. It was convenient and I was able to hit the road with Annie at a decent hour, well ahead of schedule.

During the drive out there, I felt more reserved and less than excited to ride my mare. I enjoyed the instructor, but the particular lesson we were having felt very... basic and borderline embarrassing. There is something to be said for dumbing things down to the most simplistic of things and as a rider, it makes me feel very... unaccomplished and silly.

It's the way she goes tho, and clearly Annie and I needed a second set of eyes to push us through it because we weren't overcoming it on our own anytime soon. The mare was beginning to become comfortable in just... not and I was becoming comfortable in just letting her not.

And the cycle needed to be broken.

With it tho, a sliver of self-esteem chipped off. It sounds so melodramatic to say, but I kicked myself (and continue to kick myself) for the lesson and for letting it get so bad that we needed to literally have a pony club kick-a-thon.

But, enough of the doldrums that young horses bring and it's important to remember that after this downswing, we will hit the upswing again. It's just that... horses suck sometimes and it can really affect your riding mojo when you get inside your own head. After this clinic, I trail rode once before disappearing to visit the boy for the better part of a week. During my visit, I avoided even thinking about the horse, and more specifically our forward problem... because running from your horsey problems and avoiding them is the best remedy. Sigh.

Anyone have a tiny violin?

The lesson itself was more productive than our first - we were able to make additional headway and start to piece together more parts of the puzzle, like asking Annie to start engaging herself and lowering her poll. I wasn't 100% keen on the way it was explained, but it's possible I misunderstood what the clinician was meaning or that because my lesson was so basic, I was given a very basic direction. I take it at face value tho, and part of me would love to take a few more lessons with Sven once we have our forward button reinstalled so I can get some "real" lessons and work on more than just the meat and potatoes that is riding.

Annie came out of the trailer nicely again, tied well, and quietly munched from her hay bag. She seemed more "up" than the previous day, but other than looking around more, she didn't do much.

This lesson day also symbolized a super exciting day - my new Dressage saddle finally arrived!! Since October last year, I hemmed and hawed about the demos I got to try from Kelsey (yes, the same Kelsey who makes the clay ornaments is a saddle fitter now!). I finally settled on a Hastilow Concept Elevation Dressage saddle, but Kelsey took some additional measurements to make it more customized to both me and Annie.

It was a bit of a wait for the production to begin, as I scrounged up a down deposit and started to sell my other saddles I didn't need (ie. the Bates and Western that didn't fit Annie). Kelsey was amazing with me the entire time - she was super understanding that I couldn't dump $$$ on the saddle ASAP and took payments very leisurely over the course of 6 months. I appreciated the fact she worked with me like that, because I don't particularly like laying down a big sum of cash because it is often when other things go wrong.

Since Kelsey was in town, we met up at Barn C and I arrived well before my ride time so she could adjust the flocking to Annie and we could make any other necessary adjustments. It fit pretty well, but required some additional flocking on the left panel (which we did after my lesson). I was super excited for the saddle and tried to play it down like everything was cool, but inside my stomach was flipping and I was SO excited to ride in it, haha. I'll need to get some new leathers and girth now to match as my Dressage gear when I had Suzie was already verrrry second hand (like... my leathers are flaking black bits and showing the brown underneath...).

Kelsey also gave me some samplers of Higher Standards leather soap and conditioner, as well as some oil. I have a container of some soap already, but never got to try the conditioner. 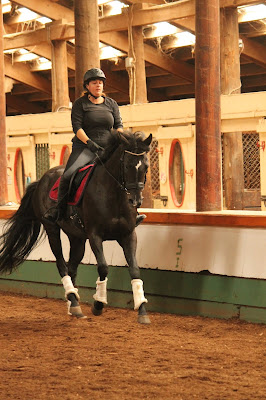 Once we got the saddle on, leathers and stirrups changed, we wandered over to the indoor and waited to be called in like the days previous. When we did, Sven did a double take in our direction and commented on our Dressage get up. I filled him in on the whole "dis is my new saddle!!" and he seemed pretty stoked to see I was in actual proper attire, haha. Unfortunately, I didn't plan my riding outfit well and it kind of clashed with my pad choice... sigh. C'est la vie, I guess.

We started out as we had the day previous. Some of the points to remember, and some of the things I found interesting: 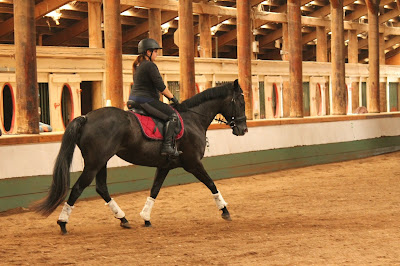 I found Sven to be incredibly practical and kind when it came to the fact Annie is still very green and young. He didn't pull any punches, but didn't make us feel like we were worthless or didn't belong in the ring. He made us work, but made me understand that young horses are fickle things and that sometimes we can't be a pet owner, we have to be someone who takes no bullshit. Zero tolerance, as it were.

So yah. It was a tough lesson to learn, not physically, but mentally. It really made me sit back on my ass and feel a pinch of self-pity, haha. I try not to bring my whining to the blog, but this particular set of lessons and problem we are currently facing have not been very fun. And sometimes, you have to do a bit of whining to get past it.

All things considered, despite the mare being downright PISSED about the new arrangement, she did try, and was (in a way) less pissed on this day about all of it.

We did make progress... and that's all I can really ask for.