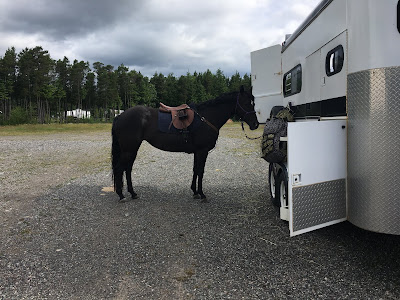 Day two of the clinic dawned bright and early (sort of). Being that I haul back and forth (especially right now when the Boyfriend is not home to watch the doggos), I needed to get my butt in gear much sooner than if I had stayed overnight. I don't mind it so much though, because I was actually looking forward to a morning ride time, which would mean I'd still get home and actually be able to do stuff!

Again, Annie was super to haul, unload, tack, etc and I was on without much delay. I didn't bring Spud with me because I wanted to get home and finished with chores as quickly as possible so I could walk the dogs and enjoy the rest of my day.

We got to business right away, as I had warmed up Annie in the grass area again. She was happy to plod along and altho she got tight a few times in her neck, she eased herself back into my hands nicely. It wasn't perfect, but there were some good moments to be had.

Anthony called us in and we chatted a little bit about Annie's body changes and he again apologized for the day before. I told him not to worry - the best laid plans and all that. It's something I understand and was pleased to hear that the horse who had been a bit of a Jerk Face was quite pleasant the two remaining days of the clinic.

Which brings me to another point. Typically clinics around here are three days. While I do have the ability to participate in all three days, I often choose to do two days only. It kind of goes in line with all the budgeting posts I have been seeing lately - to haul out each day (45min each way) and factoring in the costs of the lessons themselves, it's financially easier just to do the two. I could haul out and camp (which I have done before and it cuts down a lot on costs), but with the Boyfriend gone and having dogs at home, I can't really just bring them with me. Plus, Annie and I are typically Deader Than a Dead Thing on Day 2 so I feel like Day 3 would be wasteful when both of us aren't in shape for it. 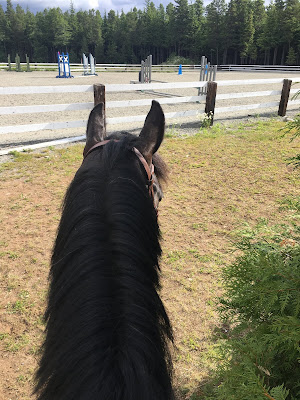 I really enjoyed this lesson - there were a lot of good moments and I had some "new" feelings undersaddle. Like, feeling Annie lock onto her first jump ever!! And jumping a very teeny 2' jump!

I do really enjoy my private lessons, because during the walk breaks Anthony really gets into biomechanics and breaks down a lot of issues unrelated to my lesson that may come up in the future. He's an exceptionally smart man and I enjoy his thought process, especially during this clinic wherein we talked about "headset" and being "round" and what it means, how to apply it to horses and why tight frames aren't beneficial. I mean, we all know why, but to hear in his own words and with real-life examples, it was really cool. We even played around with having Annie more engaged and what feel I should be feeling vs "fake" lightness and how that can hinder our quest to forward. It was really, really neat.

We worked on solidifying the basics on the flat first and a lot of what Anthony talked about the previous day was echoed. It's interesting to me that I've heard this "stop nagging her forward and make her carry herself" and I still just keep doing what I can do to get by. It bit me in the ass a few times, especially with the jumping.

If you can't push a horse forward and have them carry you to the jump, you have a very wiggly, borderline dangerous (when the jumps get higher), and very frustrating ride to the base of the jump. It all goes in line with Anthony wanting me to ride her braver and make HER brave. Sitting there and nudging every stride out of the horse isn't going to help us when the jumps get higher or I'm trying to get her into a scary corner of a Dressage arena.

So instead of fixing it, I've just been making myself ride harder. Keeping that leg on, pushing each and every stride out of her... but it doesn't work. I'm pouring sweat, breathing heavy, and my legs get sore (curse these short legs!). And in return, I've made a horse that is quite dull to the leg and enjoys not having to work as hard as she should be and gets pissed for the continuous legs bouncing at her sides.

We worked a lot on going over trot poles and revving her up to go over them and then "abandoning" ship (ie. sitting quiet) as she went over them. It was interesting to me, because she fumbled her way through the first few sets because I wasn't holding her hand. As we moved along, she became more willing to carry herself and more willing to step out to make the striding.

She botched a few of the first cross-rail jumps and as we went over them, I booted her forwards to get that forwardness we were lacking. Some of the jumps were quite messy - I'd head towards it and all of a sudden we're going left... and right... then left again.

And it all kind of boils down to the same phrase Anthony has been saying to me all year.

Don't ride every stride - she needs to hold her end of the bargain for you. When you get into the more complicated things, then you can start to micromanage more. The very basics should be there without the need for interference from the rider.

Don't get me wrong, we have made great strides tho. This particular clinic I jumped more than I ever have with Anthony and he even raised the jumps! It's small steps and I'm sure we'll get this forward thing sorted out in no time (only for another issue plagues us I'm sure, hah!).

I don't remember key points from this lesson beyond echoed statements from previous lessons, but it was enlightening and a fun lesson. I'm sad I don't have media from it, because it would have served as some ripe blog fodder!