Driving In The Rain and Trail Rides

I had wanted to give Annie a well-deserved day off since she had worked extra hard - the clinic and then a few hard (and unplanned haha) schools. It worked out well tho, because it gave me the opportunity to take Spud out. He's certainly pudgier than normal this year, so I have been trying to get him out as much as I can.

He's been a bit difficult to restart in harness tho - his manners were non-existent for the first two drives and sometimes brakes are negotiable. Nonetheless, I want to get him going again and it's no one's fault but my own his training slid back a bit. Last year I drove him a handful of times and none of which were schooling related drives.

So. Time for pony to get his butt in gear!

We headed out in the rain after I did some chores and reinstilled some ground-manners in Spud. When he's in harness, he's working. If I tell him to stand, he stands there until I say so. It took a few reprimands, but he stood patiently and waited for me to hitch him up. Since the bears were still around, I didn't want to go too far from the property.

We wandered down to one of the newer trails I found and had a very frank discussion about brakes. Once we had hit the dirt part of the trail, he tried to fly off in a trot. I did my best to keep him contained and at one point, he felt super hot and I wondered if the scent of bears was throwing him off. Of course, regardless of having the dogs with me (I mean, they're little rat dogs... what would they do to a bear, haha), I got a bit spooked and whipped Spud around and power trotted out of there.

Once breaking out into the open, I had to wrestle the little demon red-head down to a walk and then we had to do several large circles to remind him that when we turned to head home, it didn't mean he could take off. 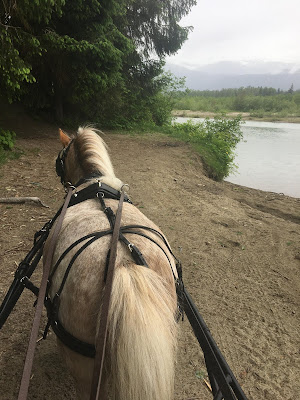 Once he realized we were just going to circle foreverrrrr, he sighed and gave up. The remainder of the ride was super pleasant after that and he trotted happily when I requested and walked when I asked. I have a feeling these little... erm... arguments are going to pop up as I continue to leg him up, but we'll get through them. He's a very... emotional little pony so I just have to convince him to use his pony powers for good and not evil.

By the time we headed home, the rain was coming down hard and I ended up hurrying home to have a hot bath. Our hot summer weather has disappeared!

I ended up disappearing for the weekend to visit the boyfriend (he's away working) as a rain-storm was heading straight for us and would mean no riding anyways. It was a good call, because it absolutely poured all weekend long and I was happy to be visiting the Boy for a few days!

Come Tuesday, I pulled Annie and Spud out for a ride and ended up running into another lady (girl? what is the proper term here lol) who I have ridden with once previously. I wandered up and down the street while I waited for her to tack up and get ready.

I did go up the driveway to see if she was ready and Annie spooked and hesitated almost the entire way. The owners have lots of stuff lining the driveway and Annie was sure it would eat her. Oh mare. I ended up hopping off to wait for S to finish tacking up Charlie and then we headed out. It was a bit awkward, trying to pony Spud and remind Annie that the new friend who joined us was indeed coming with us, but I managed to get it done and within a few minutes everyone was settled and we were off marching.

We decided to head across the highway and walk down one of the old logging roads that parallels the main highway. It is quite rocky, and I let Annie pick her route since she doesn't have back shoes on. She stumbled slightly a few times, but for the most part seemed to do OK over the rocks. I made a mental note to message the farrier for our eight week appointment and also went home and researched what I can do to strengthen her hinds without the need for shoes. I'm not anti-shoe, but I like that so far we have been able to get away with a half set of shoes for this year. When the farrier comes, it'll be something we discuss for the future.

For now, I try and avoid the really rocky areas as best as I can and if we do traverse over them, I let Annie walk along the sides of the trail where it is softer. Her hooves aren't the strongest, so I've started to do research on what products help. Does anyone have any experience with hoof hardeners and what products are better than the rest?

Once the road opened up towards the highway, we crossed back over and followed the little trail up to the fairgrounds. I did a few loops of trotting with Spud unhappily lagging behind before calling it quits - I had no intentions of schooling on this particular day.

It was a fun ride - very low-key and full of conversation. Both horses had initially started out a bit "up" but mellowed out within minutes. Both S and I figured the high bear activity was to blame for the horse's spookiness and from my experience of riding in this area for many years, I do know that late Spring makes for cautious horses sometimes.
Posted by Cathryn at 1:15 PM