The Dressage times were posted a few days in advance on Facebook for all the competitors, and since I wasn't a local to the show, I was given a later ride time (yay). Unfortunately, this didn't mean I was able to sleep in because I was giving myself ulcers thinking of all the things that could go wrong. (Seriously, sometimes I question why I got a young horse when I am so nervous and anxious allll the time).

I had finished packing the trailer the night before and had only a few things to remember to grab along with getting Annie ready. Because the weather wasn't the best, I opted to not bathe her with the hose and instead brought out warm water and hot-toweled her while she ate her morning mash. Thankfully, being a mostly black horse, she doesn't really show dirt or mud anyways.

When that was done, I started on her mane and was frustrated to find that I had cut her mane way too short a few days prior and didn't really do a great job at thinning it out. Her mane is a double mane, and I kind of enjoy it so I've never trained it over. The amount of thickness I was dealing with was astonishing. I tried my best to scissor it thinner without having to actually pull it (I'm not a fan of pulling manes. Did it once with Suzie and felt bad the entire time, so now I just use scissors). Unfortunately tho, her braids looked like giant ball-sacks growing out of the top of her neck. I'm sure they would've looked much nicer had I used yarn and a needle, but being so nervous and being unsure how Annie would be for the whole braiding thing, I took the easy way out and used elastics (go ahead, laugh at the scrotum braids).

She loaded and travelled just fine, even when I stopped off at a local convenience store to grab some food and drinks. All in all, we ended up arriving almost three hours before my test and I sandwiched my rig between two other horse trailers so Annie would have some friends.

She was mostly behaved, aside from some slight sideways dancing and calling out. Nothing strange or out of the ordinary, altho I did find she would wait for me to pull some hay through the haynet and then eat it... I may have to find a hay bag vs net for our next show because I didn't really like how she didn't really eat much when tied to the trailer. I mean, she did eat, but I'd prefer if she could get giant mouthfuls vs picking from the nibble net. 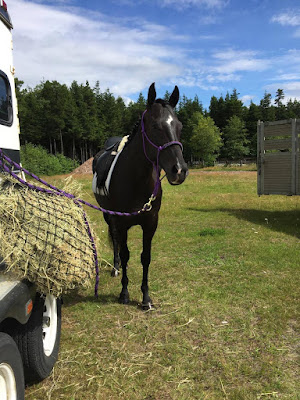 I hung out with her most of the morning, not wanting to leave her without some kind of supervision, but the kid did good. Anywhere I went, I brought her with me, and she seemed to enjoy picking at the non-existent grass near the Dressage court.

Soon she was tacked up and I finished getting the rest of my show clothes on and headed to the warm up area. She felt fucking fantastic in the warm up. Her trot was loose, swinging, and despite not really listening to my turning aids, she felt really good.

Old habits die hard I guess, because she threw her hissy fit once or twice before picking up her right leads and getting over herself. I felt pretty good tho, because after the moment of pissyness, she was back with me again and felt decent. Not the best she has, but decent. 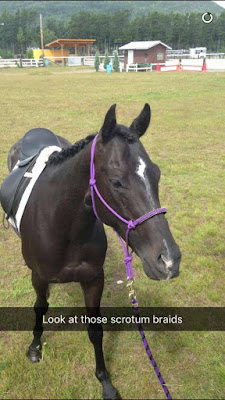 I quit there, but stayed in the arena and walked around to keep her mind busy since last time I left the warm up area and tried to stand by the dressage court, she just. could. not.

Eventually I did make my way to the Dressage court and she was really good and even stood quiet outside of it.

And then, it was our turn. 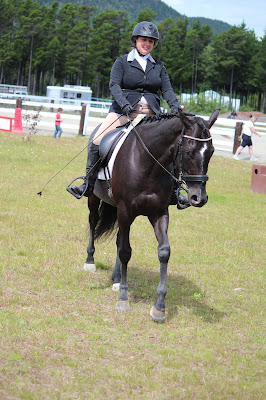 The first test - Training Level 1 - actually wasn't that bad. At least, I didn't think it was. She was really hunched in the contact and hollow, so I tried to just keep riding and relax while giving her a lot of preparation ahead of time as to what I was going to ask. Easier said than done though, and I caught myself not riding my horse a few times.

She picked up the wrong lead in our canter right (her bad lead), but it was fixed by the time we got to our circle.

It wasn't the best test, but it certainly wasn't the worst. Our circles were more like eggs, centerline full of wiggles, and our final halt was uhm... certainly not immobile (what the heck, Annie?). But, we did it and that's all that matters.

Test two - Training Level 2 - was much, much worse. Not only did she not pick up her leads - either of them, but she crossfired and hopped back and forth with her hind end like a deranged monkey. I mainly just stayed seated for the ride and tried to let her figure it out, but in retrospect, maybe I should've brought her back down again. She seemed pretty pissy with it, and I could tell she was getting frustrated so I just mostly tried to stay out of her way while insisting she still do the geometry of the test. During a point in the test, I had blanked on what movement came next and had thought my reader said a different letter and ended up going off-course. Thankfully the judge let me go back and finish the test, wherein Annie attempted to leave the court at A. I gave her a tap with the whip and carried on.

My photographer didn't get any pictures of the canter - probably because it was terrible (just kidding). But you can see how she was very tense during the test and things were starting to go south.

Test three... can we just not even talk about this one? Please.

This test made me cry.

It was much like our second test, except she actually did leave the arena. Not at A - but just after the letter F. We were trotting down towards B and I felt her leg yielding and she literally just leg yielded out and over the cement barriers. I had tried to keep her in, but she literally just wandered out and there wasn't much I could do to hold her in. I was mortified, said something like, "Seriously?!" and marched back to the arena tapping on Annie's butt with the whip.

The judge let us finish our test, which fell apart quicker than wet toilet paper. I thanked the judge for her time at the end of the test, explained it was Annie's first show and the judge said that we did just fine and that when she saw us earlier in the warm up and we looked MUCH better. So, maybe the stress of showing was getting to me too.

Upon dismounting, the flood-gates opened and I tried to brush them away as a few friends crowded over to give their support and their own "Dressage Horror Stories" (someone should write a book). A few other riders came over and actually commended me on keeping my cool with Annie in the ring for all the sassiness she was throwing my way. I pretty much rode the test despite the creature beneath me and when she offered sassiness, I just kept riding and ignored it.

Once the friends dissipated, I slinked away to my trailer and cried some more while I untacked. I hated being "that person" at the show with "that horse". And truthfully, it really battered down my confidence and my pride in bringing Annie along.

I will say, I was NOT mad at Annie. Not at all.  I was just very, very disappointed in myself. I had told myself I was going into this show without any expectations and yet, here I was, upset because I didn't meet my expectations. It was also, in a way, a serving of humble pie. I had chosen to do a harder test (Training Level) vs Walk/Trot when I knew our canters were not up to par, and knowing this would be her first show I should have made it easier. I should've made it easier.

But at the same time, I didn't think what I was asking was completely out of line either. Canter isn't so hard... 20m aren't so hard... other people are doing it on their green horses... why not me?

Well, Annie ISN'T those horses. Twenty meter canter circles ARE hard for her. Getting her leads is hard for her.

On the drive home, I started to play the what if game. What if I'm not the right rider for her? What if we are just going to keep having shit rides? What if things never get better? What if she never gets her leads? Of course, a lot of that "what if" game is just nonsense and I know that, but the lack of sleep and lack of hydration has a funny way of skewing things.

I moaned and groaned to a few friends and replayed over and over the events of Friday and the week leading up to the show, trying to figure out where the heck this pissy attitude was coming from. Was it because we worked 7 days this week? Was it because I've been so focused on ring work? Is it because she's hurting?

The list went on and on, and I battled with myself about showing up the next morning for more classes.

*I haven't been able to pick up my Dressage tests yet, but will share them in the next post. Also, spoiler alert: Day 2 went much, much better ;)