Help Me, I've Lost My Rider

For those suckered into the "clickbait" that is the title, I will preface by saying that no, I did not make an unscheduled exit off my pon-pon this past weekend.

So, with that out of the way, let me recount Annie's first foray into a "real" event. I have established that we have ridden at the TBC fairgrounds previously, but the atmosphere was pretty bland and dull. With the area's riding club putting on various events throughout the year, I really wanted to take Annie to a few as we progressed over the year and low and behold, I was able to make it to one on Saturday.

I knew I was going to be late to the event since I had to stop off at a local farm and pick up one of the roundbales they had stored for me over the winter. They are going to haying again this year soon and need all of the barn-stored rounds removed so they can re-stock with this years hay. It was a bit unfortunate the only time they were available to load the round was literally 30min before the Percentage Days was supposed to begin, but it is what it is.

Unfortunately, being "late" to things does not bode well with me. I was the last rider to arrive and although no one was remotely upset I was late, it left me in a bit of a shitty spot. Most of the riders had already warmed up and were standing around the dressage court - I could have opted to warm up in the fenced large arena across from the dressage arena or I could warm up on the grassy flat where everyone was standing (and where everyone had warmed up their horses).

Mistake #1 was "warming up" on the grass and when Annie declined to meet my request to get off of my left leg (hold on, there is gonna be a theme here in the next few days), I didn't feel confident enough to push it and have her explode in the open. She felt really distant and I could feel her sucking back to the other horses whenever we turned away from them. Not necessarily her fault, but also made it difficult trying to warm up a greenie who wasn't really listening to begin with and just letting her do whatever the fuck she wanted.

I ended up toodling around quietly before joining the rest of the riders. And waited.

And waited some more.

I wish I was joking.

Mistake #2 was allowing one of the spectators to make me nervous and allow that nervousness to settle into the pit of my stomach and eat away at me while we waited. I know this person and I don't typically let other people's impressions bother me, but it was Annie's first time out and I didn't want to look stupid and I didn't want to have anything bad happen.

I was pretty happy that Annie stood with the line-up of other horses quietly, casually looking back to watch riders warm up for the second time. I ended up reading other people's dressage tests from her back and she only spooked once when someone handed me a piece of paper. Otherwise she was really good.

And we continued to wait.

It was a bit frustrating and I could feel my nerves just build up and up with each passing minute. Thankfully the horse beneath me stayed quiet, but I could feel we were on very different wave-lengths despite our cool outer demeanor.

I don't know if this event can be better managed, considering quite a few people did all of their tests in a row vs doing one and waiting and letting another rider go in. I realize a few people were not able to stay for the entire day and wait around, and I understand that, but it was a bit annoying to have someone else bring a young horse who would be experiencing that type of event for the first time and have them take over and get all of their tests out of the way because they didn't want the young horse standing around and losing it's marbles.

We must've waited over an hour before I was able to warm up again and then quickly enter the dressage arena for our test. By this time, I was so nervous my legs were literally shaking in my stirrups. I haven't experienced that kind of anxiety in the saddle for a while and it was actually really frustrating. We got through our test, but Annie did NOT feel like the horse I had previously ridden. She went into the arena on her own, didn't spook at the judges booth, didn't bat an eye and did all the movements I asked of her. Except that left leg resistance was still there and I wasn't even riding my horse anymore.

^ (The above videos are of our first test. My videographer had to leave after that and it's probably a good thing we have no evidence of our second test lol. As a weird sidenote, I messaged my friend afterwards and said, "K... the videos don't look as bad as it FELT." So there's that.)

Mistake #3 was waiting too long to get after her for things and not just calling it a day after our first test.

As we waited some more for our second test, the people who had gotten all their tests out of the way started to leave. I was in the middle of reading someone's test when the group of horses beside me disappeared and Annie tried to follow them. I was having a difficult time trying to call out a more advanced test and wrangle my horse to stay forwards facing the arena, so I just hopped off and finished calling out the test for the rider.

I ended up waiting for almost another hour and after trying to explain to another competitor that I just wanted to do my second little walk/trot test so I could go home, they let me go back in the arena.

Our second test I got after her for the resistance and it went better, but she was AMPED. We lost our steering, we lost our brakes, we lost pretty much everything. She cantered part-way down center-line near the end.

I was pretty embarrassed and frustrated in myself, but the sit in Judge was really nice and said a lot of nice things about Annie. She told me next time to try a Training level test instead to keep Annie's mind a bit busier. I appreciated her commentary and thanked her for her time.

Before leaving I left Annie tied to the trailer with Spud, paid, collected my tests, and started to put my stuff away. And yet, somehow I managed to fucking forget my whip, gloves, and hoodie somewhere at the fairgrounds. Sigh.

Still, she was a lot better than she could've been. She loaded and unloaded well, tacked up quietly, went in and out of the dressage arena, did all the movements in the test (and didn't jump out of the arena), and stood quietly almost all fricken day. What more could I want?

I wasn't necessarily unhappy with her, we just felt like we were not "there" for eachother. And as a rider, I really let Annie down. I let my unpreparedness and nervousness get the better of me and I remember thinking in my second test, "All I want to do is get off and go home." Which is a terrible attitude to have. I just didn't feel it, and clearly Annie didn't feel it either.

The Judge in the end told us our first test was much nicer than the second, and although the second had more resistance to my left leg in it, our first test was not as frantic and choppy. You may notice that we upped our score on our left turns in comparing the tests (test 1 the left turn at trot was a 6, and in the second test it was a 7). However, our transitions and general "relaxed" demeanour had vanished.

For next time, I already have a better game plan in mind:

#1 Obviously, arriving earlier before the event is going to be a large asset.

#2 Utilize the outdoor arena and if I need to, put on my big girl panties and ask a fucking friend to come hang out with me in the arena while I warm up! I don't need to be a hero riding around in the open, but I do need to give my horse a good experience. Using the buddy system is nothing to be ashamed of.

#3 Give Annie some "Chill" before we go there. She actually probably doesn't even need it, but it might take that extra edge off that makes me even more nervous and it also might provide the placebo effect I need to ride my goddamn horse.

#4 Be fair to myself. I am an amateur and I do this for fun. It isn't fair if I literally make myself sick at a FUN event to the point where I can't even ride properly. 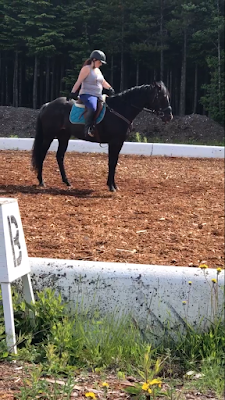