We've been plugging away at the whole ''Have Trailer, Will Travel'' thing, one step at a time (literally). Annie continues to be nervous and unsure about the trailer and what exactly my intentions are with her once she's in there. The gravity of the whole unfortunate pull back incident has really dampered her confidence in me (and the Trailer of Death), but we've slowly been repairing it one lesson at a time.

The lessons are virtually the same, with a few ''new'' questions or exercises being asked each time. I don't particularly believe in making each lesson exactly the same, mostly because I don't want to overwhelm her or make her bored/ frustrated with having the exercise be the same thing.

I realize that elaborating on our trailer sessions might be boring, but my hope is that it might help someone else with their trailering troubles and could provide some useful fodder for combatting similar issues (or preventing it from happening altogether...).

The trailer stuff has been going well - Lesson 4 wasn't ground-breaking, but we did get a really big step towards positivity.

Lesson 4 was a break-down of cues and a ''lighter'' lesson. I wasn't really looking to push her further into the trailer or even for something ''more'' than our previous lesson. She offered up a nice moment wherein she stepped a hind leg onto the ramp, and subsequently scared herself and promptly backed politely down the ramp. I don't think she realized how close she was, and when she realized she had made it that much closer into the trailer, her anxiety spiked.

I didn't punish her or feed into it, but she was really stand-offish after that and she preferred to stay in the middle of the ramp vs closer to the top where she had normally been comfortable.

Instead of continuing to try and get back to where we were before, I backed her out and practiced some self-loading exercises - having her step up onto the ramp with a cluck and a tap of the whip (as needed) and we ended it there.

As I turned on my heel to lead her back to the barn, she let out a HUGE sigh.


Sometimes you can't have everything, and in some ways I think it might look like regression, but she made a huge step towards positively loading. It is OK for her to be uncertain and change her mind about something, especially something that scared her in the past.

Unfortunately, Lesson 5 was about a week after Lesson 4 simply because the whole hooking up the trailer and hauling it out to the horses for 20min was getting to be a bit much. The horse trailer isn't allowed to be kept at the BOs, so we leave it at the Boy's moms place. It takes an extra 30 min or so to go get the trailer, hook up, drive out, and then drive back, park, unhitch, drive home.

So I talked to the BO and she agreed to let me park the trailer for a few weeks so I can work with Annie more. Backing up to the trailer and lowering the hitch onto the ball and securing is soooo much easier!

Lesson 5 was interesting - and it initially wasn't even about the trailer. I had wanted to ride and just getting Annie to PASS the trailer was a play into just how afraid she was. She wasn't bad, but she was very leery about going past the Metal Box of Death with me on her back. She did it, tho, and survived to tell the tale.

I figured I'd play around with the whole "I can't go past this thing" and on the following ride (Trailer Lesson 6), asked her to go closer and upon returning from our ride, I had her halt parallel to the trailer and wait for me to dismount. She wasn't sure about it, especially with the Death Box there, but she was good. I decided to add Spud into the mix after seeing how much confidence he brought to Annie (another post is coming!). The best thing about him is that I can push the divider over, have him in the trailer with me, and still have room to work Annie.

Sometimes it isn't necessarily about the loading thing - it's about the association with the trailer too. I felt it was important to take those steps to show Annie that we don't always load (or try to load) whenever the trailer is there. Sometimes we just ride by it and be cool, dawg.

Lesson 7 was more "loading orientated" and after we did the whole "in and out" dance, I had a lightbulb moment. I tied Annie to the trailer - she was uncertain at first, but I stayed with her long enough to ensure she was fine and plodded off to go grab Spud. Spud has been giving Annie a lot of confidence (another post is coming) and I figured, why not try adding Spud to the mix to SHOW Annie.

The amazing thing about Spud is that he's small so he doesn't get in the way and he just doesn't give a shit about anything, so I knew he wasn't going to start pawing in the trailer or freak out with Annie coming in and out. 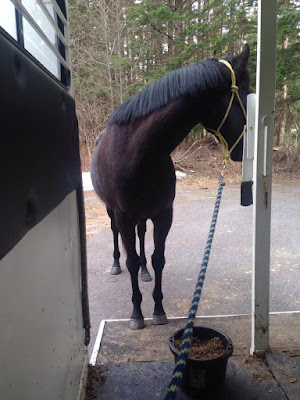 I had moved the divider of the trailer over, so I had a large slant-type load and parked Spud at the top. I stood near his hip and much to my surprise, Annie seemed to have a light-bulb moment of her own. No, she didn't load and nothing earth shattering happened, but she seemed really curious about the fact Spud was cool with the Death Box and as the session wore on, her confidence started to blossom.
Nothing ground-breaking happened, but she was a lot more willing to join Spud vs me. I realize that Mare is gonna have to learn to trust me at some point, but Spud seems to be a good middle ground and the fact that his carelessness is rubbing off on her, is good.

The session ended positively - Annie was starting to get saturated and Spud was pretty pissed the he didn't get ALL THE CARROTS. We had a moment where Annie loaded, quite forwardly, into half of the trailer and paused to take it all in. She didn't back pedal or freak out, she just stood. I backed her out before she was pushed too much.

Slowly but surely, we're plucking away at it.