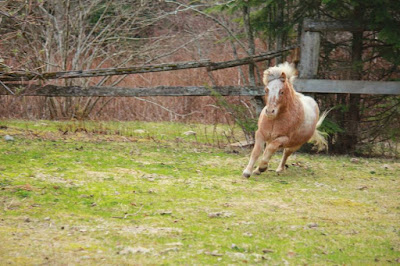 Because life is busy and everyone needs more Spud in it.

2. Some may already know this, but he was purchased at a cattle auction along with his sister (I don't actually know if she is his full or half sibling).

3. Spud's sister's name is Peaches. She is actually travelling across Canada because her owners are relocating.

4. Supposedly was purchased by an older man for his grandkids before being dumped at the cattle auction when the kids lost interest. I am told he spent 3-4 years just gallivanting the pasture with his sister when this old guy had him. (Hooray for semi-ferals).

5. He LOVES people and just can't help himself if someone kneels or bends down - he's always gotta come over and say hi. He also can't help himself and drags my coats or water bottles around when I leave them by the roundbale when I'm picking poo.

6. His best friend in the whole world is an older Paint gelding named AJ.

7. He walks up and down stairs.

8. If there is a way to escape the paddock, he will.

9. His nick-names include: Spudley (or Mr. Spudley if we're being fancy), Pony Horse, and Potato.

10. He eats just about anything (and weirdly enjoys dewormer). Just ask the SO about where his pizza pretzel and chips went.

11. He is goofy, but is also quite sensitive. He will give you 110%, but the minute you heckle with him over something, he just shuts down. In a way, he's a perfect Ammy horse in that a lot of novice drivers don't know to ask for more complicated things or just plain ask for MORE so he is happy to plug along. 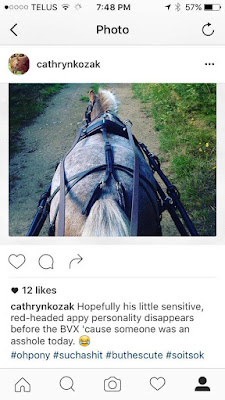 12. He is pretty damn bombproof.
Example 1: SO threw a tennis ball for one of the dogs while we were in the cart, dog went to grab ball, ball ping-ponged out of dog's mouth and smacked Spud right in the face. He didn't even blink.
Example 2: Friend wanted to take Spud for a spin and ended up driving him right through an oscillating sprinkler that was turned on.

Example 3: A random Australian Shepherd joined us on one of our road-drives and while playing with one of our dogs, passed in-behind Spud's back legs. I still have no idea how he had room to do that!

13. His color, altho is confusing is a chestnut varnish which is an Appy characteristic. He also has a blaze which can be hard to see depending on the season.

14. The farrier has to kneel on the ground to do his feet.

15. He doesn't get grain, and gets mad when I grain the other horses. He'll buck out at the air, shake his head, and squeal.

16. He was initially going to be a resale project... but I don't forsee that happening ever.

17. He actually has a large star on his face and small white socks which are hardly visible due to his coloring.

18. His tail is what dreams are made of. 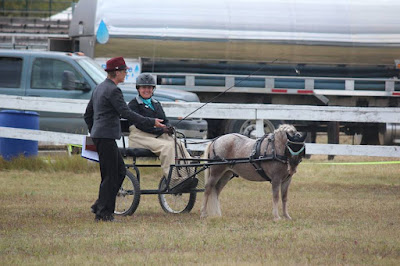