A few weeks back, I was contacted by a non-profit society that runs our town's annual light festival to see if I would consider donating my time to bring Spud down for photo opportunities like I had done last year. I took some time before I replied, as I instantly remembered how bitterly cold and miserable it was last year to stand around (-15C how about nooooo).

In the end, I relented and agreed to bring my pony to the festivities, if for nothing else, a good chance at desensitization like in previous years. Can you tell I enjoy annoying my horses?

This year the organizational committee had contacted a family who had just added two miniature horses to their herd earlier this year to bring their mini's down for photo ops. Last year, the festival had two full-sized horses and with the darkness and poor segregation from people, it was put into question whether or not bringing in large horses would be safe. The committee opted to have the trio of minis (including Spud) to bring more safety to the entire event. I appreciated their concern in this, as the larger horses last year seemed more affected by the darkness than Spud.

Days leading up to the event, I did absolutely nothing to prepare. Between juggling work, schooling (and studying), chores, and braving the rain and snow we had had, I just couldn't find the time to get Spud out aside from a hand walk. And of course, the one day I had anticipated to work with him, the fucker refused to be caught and I didn't have it in me to chase a fat little pony all over the property.

But still, I needn't be worried, because as soon as that harness comes on, he is all business. 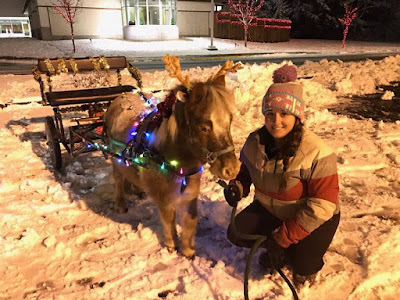 On the day of the light festival, I was relieved to see it had snowed for a better part of the day - this meant that the temperatures were cool but not bitterly cold and there would be no icey winds paired with it. The snow stopped a few hours before the actual event and being in true unprepared fashion, I showed up just half an hour before the event was supposed to be underway. Hooray for lack of planning.

Aside from my inability to actually be prepared, I managed to slap some decorations on Spud and his cart and call it a day. Thankfully the boyfriend was there to hold things like tape and scissors, because I kept losing track of where I set them down and daylight was fading fast which made it super frustrating to find the decorations in the trailer and see where I was taping down the battery-powered light strands.

After that was all said and done, it was time to stand in line with two other minis and attempt to get kids and adults to get their photos taken in a organized fashion.

I will say it was much better than last year, but we were still faced with an overflow of people. At some point, I think Spud had seven separate people petting him. He took it well though, save for one instance wherein someone nearby lit of several fire-crackers. He actually didn't even flinch until the other two minis lost their fucking minds. So we had to take a walk to cool off and get our brain back in it's shell.

The 2 hours flew by and it was a really good time. I didn't feel as though it was as disorganized as last year and the people seemed more respectful of the horses - except for the two people who asked me if Spud was a donkey (seriously!?).
Posted by Cathryn at 2:06 PM