In my previous post, quite a few blog-readers contacted me or commented that they were interested in the whole mystical world that is kinesiology taping. Skeptics and critics alike were flooding my comment section and inbox, perplexed and certainly interested in how it all works.

In response to the comments and messages, I had thought about drafting up a little blurb, but decided this topic would be better left to a professional. So, I contacted my good friend, SpottedDressage (the one who has taped Suzie) and forced convinced her to write about the taping and feature a few questions I had been asked. 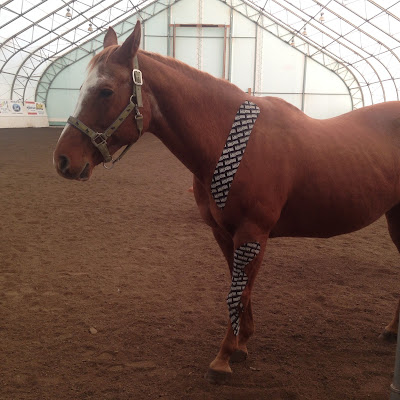 With that being said, I recommend viewing SpottedDressage's in depth article, which covers the how and whys of this alternative therapy click here.

And in addition to the more scientific aspect of the tape, I wanted to speak about my own experiences as an owner and how it has affected Suzie, because I too, was a skeptic at one point.

Since my friend had undergone the associated schooling and such to practice this therapy, I jumped at the chance to test it on Suzie's problematic knee. I didn't hold much hope initially, but was pleasantly surprised when the tape fell off 5 days later that her knee was much less abrasive and ballooned. I still kick myself that I had never taken any before photos.

I have found nothing but positives from the taping when applied to my sweet mare, but the application has only been for her knee and shoulder area. I have heard that other areas are more difficult for the tape to stick to or stay in position - but that hasn't been the case.

For those who are considering taping their equines, I urge you to find a professional and try it for yourself! You may be pleasantly surprised as to what changes you see.
Posted by Cathryn at 1:09 PM