As a forewarning, this is going to be a somewhat scatter-brained post, given the nature of the content.

I haven't been posting for a multitude of reasons - namely due to the fact that I have been ridiculously busy fitting into my role at work, helping the BF winterize the house and finish up left-over summer chores, and balancing back into somewhat of a semi-normal life. The horses haven't taken a back-seat - I've been visiting them and interacting with them almost daily. 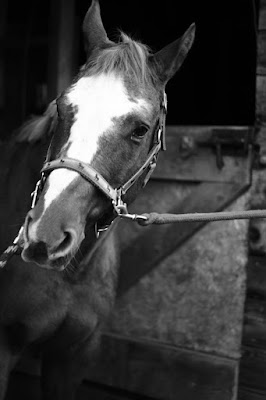 It's been pretty boring though - things like hand-walking and grooming aren't really things I feel compelled to blog about, so I revert back into some semblance of radio silence.

I have, however, immersed myself into thinking about Ms. Red Mare lately.

There have been quite a few changes in the land of All Things Suzie.

Her arthritic knee has gotten worse over the last few months. It has become difficult for her to bend her joint - she can lift it about 6 inches from the ground before it locks up and she pulls away. As one can imagine, it makes things like shoeing, lying down, and cantering a difficult task.

She seems pretty good at knowing which way to bend it when she goes down for a good roll or to laze about in the sun. I had first noticed the extra effort she had to take whilst laying down back in August when I had brought her home. It hasn't seemed to stop her from getting down and getting a good back scratch in the dirt, though.

Since coming home from my month-long workstint, I've poulticed away a lot of residual swelling in the knee (she mostly just puttered and stood around during my absence), re-introduced BOT therapy, the previcox (boyfriend was not comfortable giving meds) and even had a friend tape her up with kinesiology tape.

The farrier came out at the beginning of the week and was pretty understanding of her limitations and worked quickly on her difficult leg. She was definitely a bit more sore coming out of the appointment, which was to be expected, but it made my heart hurt a little.

Aside from consulting with her vet (who I believe will want to initiate Osphos into her pain management regime since I don't think the Previcox is touching it anymore), I've had to really buckle down and consider a lot of things and quality of life has become a forefront topic. 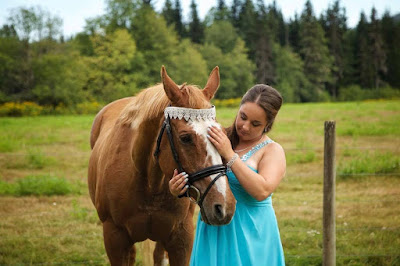 To discuss things as personal as euthanasia and death, I think it really turns a lot of people off. It is such a sensitive and inconsiderate thing to talk about in a lot of people's minds, especially if that animal is still... y'anno... alive. I don't intend to drag out my thought process, but I feel that I need to write it down and discuss it. If not just for the therapeutic feeling it gives me, but to also share my own journey and story for someone who may be going through similar circumstances.

There is a lot to be considered and at face value, it really seems overwhelming and bleak when you put it all out on paper.

But, I do have to be realistic and fair to Suzie.

As she ages and her body changes, I have to be aware of those changes and focus on her morale. She is an accurate depiction of how she truly feels, and I need to respect that.

Currently, she is sassy (perhaps a bit too sassy), healthy, and happy. She hurts, yes. She creaks, yes. But she also nickers every time she hears my voice or her grain being dished up. She also sneaks past me through the barn doors and gleefully trots away, headbobbing and limping along to the green grass on the front lawn. She has even refused to be caught several times and at one point, bucked out at me because I was trying to put her back in the paddock.

A friend who was visiting during the kinesiology taping session mentioned that although her lameness has worsened, her spirit certainly has not changed. She is still the same fiery soul with that glint of mischief in her eyes.

And when I witness the good moments, and I hear the affirmation that she is happy, I am filled with my own contentment. You see, she doesn't owe me a damn thing. She is 23 years old and has logged more miles than any horse I have ever ridden.

But when I see the difficulties, I worry. I worry about how fast things will progress, how much longer I have left, if she knows how much I care for her and love her...

And when it all comes down to it, my only true worry in all of this, is that she will not tell me in a clear and concise way that she is ready.

My arms bubble into goosebumps just thinking about it.

I have had some wonderful friends who have told me several times that horses are pretty damn good at communicating things. And what gives me this weird sense of hope is reading about it first-hand from someone who was so wonderfully explicit and documented every single aspect of her loss. I truly appreciate the entire documentation of both Gogo and old Darby mare. 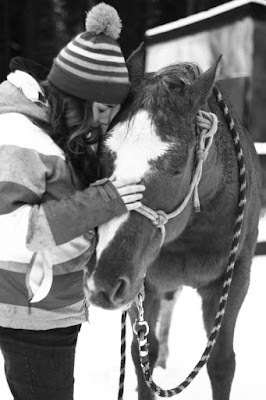 And whenever she is ready, I will be there.