Home is Where the Heart Is

Following the five day long escapade at the BVX, I had one full day to pack and get my things ready for a new kind of adventure.

This will require some back-peddling of sorts, naturally. As I am certain most, if not all of my readers are aware of the fact I have been in limbo with employment since earlier this year. I have picked up the odd contract here and there, but nothing has been concrete given the very abrupt construction job shortages in the area. So signifigantly in fact, that Employment Insurance Benefits have added an extra 25 weeks of benefits to those who have been impacted by job loss and are still unable to find employment.

The economy in my area is floundering after a five year long smelter upgrade project was completed earlier in 2016. A proposed LNG pipeline has been on hold as well, after many were waiting with bated breath for a positive announcement. And so, workers and companies alike are in limbo. Waiting for a new project to fill it's place.

If you need to know anything about construction, know this: every day you work, you work yourself out of a job. It's the nature of the beast, and a harsh reality to face for some.

Going back to my original story; I went in for an interview on the Friday before the BVX and ended up being the selected candidate. The position itself is in my field, but the only catch was that it is a "camp" job.

For those unfamiliar with construction jobs, it basically means you temporarily relocate to the job site and usually, there is a specified "turn around" time wherein you return home for some time off before returning back to work. It is all dependent on the contract the company has agreed upon with the client, but turn arounds are usually 2 weeks in, 1 week out (or in my case in my previous job, 3 weeks in and 1 week out. I did not need to relocate for that particular job, though).

Once receiving the phone call, I grasped at the opportunity firmly with both hands. There is the possibility of becoming a permanent fixture within this company and this long-distance job is the first major hurdle to proving myself.

At the beginning of my career, I was hesitant to becoming a traveler, mostly for the plain fact we have two dogs and the horses are in a self-care situation. Paying someone to come in and take care of all of our pets would cancel out quite a large chunk of change, but in this situation, the boyfriend is able to pick up the slack while I am gone. I am so grateful to have someone in my life who pushes me to try new things and embark on new adventures, all while he scoops poop and fills water troughs.

So after returning home from the BVX Sunday afternoon, we unpacked the trailer, started the laundry, and I began packing for my next adventure. Monday morning I hosed out the horse trailer (and parked it for the season), finished up packing, cleaning the house and cleaned up the horse's pasture.

Tuesday morning the boyfriend dropped me off at the boat launch, as this particular jobsite is only accessible via helicopter or boat. The opportunity itself is exciting, as I am literally working within the side of a mountain that was blasted out for the operations machinery over 50 years ago. The downside is that I get no cell reception, and the entire project is off grid which means there is quite a lack of stimulating activities.

I have never done "camp life" before, so it has been quite an enlightening and interesting experience. My initial first few days were quite difficult - accustomizing to the exceptionally small living arrangements, new noises and sounds, new routines (the kitchen only serves meals at dedicated hours).  I will admit that I hid in the bathroom a few times to shed a tear or two - mostly because I feel so isolated here. In addition, I am a major home-body who has never really had to leave my life behind for a lengthy amount of time.

There aren't many workers here and as of today, I am the only female working on the project. There are no stores, walkways, or otherwise, and walking outside is considered taboo unless you have someone with you, as this place is filled with roaming grizzlies and black bears.

So for now, expect musings, filler posts, and a snapshot or two of the horses when I receive them. On another note - how do you do when you have to leave home? How do you keep busy?

I do promise that it isn't all bad - I appreciate and marvel at the beauty I know not everyone will get a chance to see, but I am also counting down the days until I return home. 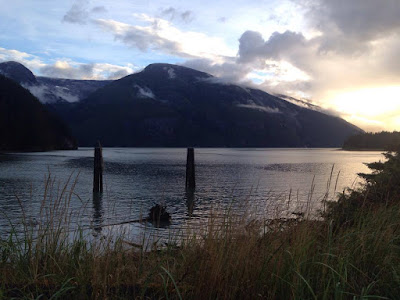