I've been missing from the blogosphere for a few weeks and must admit that it isn't purely coincidental. In truth, I've been avoiding writing down any kind of concrete feelings or ideas simply because I've been sucked into this emotional rollercoaster of sadness, frustration, and depression when it comes to riding.

There is nothing wrong with Finn. He is a good boy, he is simple to ride, and he is certainly well schooled. However, we've run into a "problem" (which in all truthfulness, it isn't really a "problem") that has really put everything to a screeching halt.  So what is the issue? He's old. He's stiff, creaky, and sometimes takes additional time to truly warm up and work out of his stiffness.

Is there anything really wrong with that? No. There isn't any reason to be upset with him or be frustrated, but still, I am. It sounds so petty, but it feels like the whole Suzie situation all over again.

We went to a little dinky schooling show this past weekend and were subsequently scratched from our second Dressage test by the judge for Finn being hitchy in his trot to the right. After a lengthy cry at the trailer for feeling like yet again a failure in keeping an old horse sound, I picked myself up and stayed the night at a friend's house (same friend who is boarding Suz for me, so it was nice to see her after that emotional day). He was buted that evening to help ease out any residual stiffness and in the morning, I rode my flat classes and won High Point which was nice, but I was approached by the secondary judge and told that Finn seemed a bit "sticky" in his hind end.

I pride myself in taking the utmost care of my horses - especially my senior. It feels like a shot to the gut when things don't go right and it feels so frustrating to be consistently stuck in the same "spot" in my riding. I don't ride as much as I used to, simply because I am afraid of causing excess strain on Finn or doing too much and instead of riding being my stress-reliever, I find myself stressing out about his soundness level or his physical state.

There isn't anything wrong with Finn - he is stiff and old. Age is not on his side and after having over two years off in being a complete pasture puff, I shouldn't be surprised.

So why am I so upset?

I am an overly anxious person by nature, and when something little like "slight stiffness" enters the picture and I get kicked out of a dressage test at a show, I freak the fuck out. I cry, and sob, and want to just throw in the towel for YET AGAIN being disappointed and let down. And it isn't Finn's fault - I KNEW what I was walking into and I knew what the trials and tribulations would be for us.

It sounds like I'm being a big baby, because we did win High Point and he looked fucking fabulous in the ring.

But I just so badly want to enjoy riding again. I want to not have to worry about if today is the day my senior horse is going to be stiff or hitchy in his gait. I don't want to worry about being scratched from a class by a Judge in front of spectators. I feel like I've battled so many lameness issues the last three years that I've just had enough and any kind of issue is sending me into a tailspin.

I did discuss all of my feelings with Finn's owner, and I was willing to return him home after the somewhat disastrous show. But, we've both decided he will stay. He enjoys the light riding and I enjoy getting him out and about. Sure, I'm stuck at Training Level for the 6th year in a row, but for coming out of retirement in May, we've done a heck of a job thus far.

So we've scheduled a chiropractor appointment for Mr. Finnegan since we're both pretty positive he needs some adjustments since he's been retired since 2014 and then ridden by me with no body work in between.

It'll get better - I'll find what makes me want to try and want to have good rides again... I just feel defeated and down-trodden. 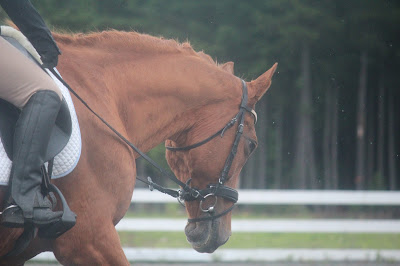