Two weekends ago, when I had taken Spud out for the Driving Clinic, I also hauled Finn and took a few lessons from his owner since I felt I was at a sticking point with him. He wasn't really improving much, and I figured I could use some extra eyes on the ground to help.

His owner agreed and we actually pin-pointed where one of my biggest issues is. My legs are very, very short and Finn's belly is quite dropped. With teeny tiny POW spurs, I don't really have the ability to get after him like I could/would with a longer leg. And I'm sorry, but I don't have killer calves and after twenty minutes of riding him for his owner, I wanted to die. My legs felt like jelly and we STILL needed to be more forward.

His owner recommended getting longer/larger spurs. So while I waited for my new spurs to come in, I decided to utilize my blunt rowel spurs that I had used on Suzie. The difference was completely mesmerizing - I was actually able to manipulate him and I didn't have to stick my spur into his gut and grind it there either.

It was quite beneficial to have his owner help me out - she knows his limitations better than anyone and I found that I was more or less tip-toeing around him. When she asked me to show a stretchy trot, I showed her and the first thing out of her mouth was, "He can do more than that." So it's up to me to push him vs letting him just plug along.

Fast forward to last weekend (I know, I know, I'm behind) when I had dropped Suzie off at my girlfriend's place to head out on pasture, I also hauled Finn out to attend the monthly Percentage Days and Clear Rounds that was being hosted by the city's saddle club. I dropped Suzie off early in the morning before heading over to the fairgrounds where Finn was losing his noodle because, "Where did my girlfriend go?!"

He calmed down once I gave him some hay - there were quite literally only three trailers at the grounds (a lot of clinics were going on and quite a few regular attendees were missing due to that). With there being such a minimal showing for the Dressage (% Days) portion of the day, I was able to take my time tacking up and such.

Unfortunately, the day seemed to be tainted by pony-tude, as a young rider was struck on the top of her head with a hoof when they tried to cut the naughty pony's bridlepath. I was in the back of my trailer changing when I heard one of the mom's yelling for me and asking if I had any napkins - I yanked on my breeches and boots and jogged out to meet her by my truck. I didn't have any napkins, but I handed her one of the towels I have in my truck for my dog. I followed her around my trailer to the one parked next to me where the young girl stood, blood literally pouring down her face.

Thankfully, it was all quite superficial, as head wounds tend to bleed like a mother-trucker. The girl's mother took her to the hospital where she received 4 stitches to the top of her scalp. She joined us for the jumping (Clear Round) portion of the day later that afternoon.

After all of that excitement, I headed to the arena armed with my spurs and hoping for some clean tests. Lately, our trot - canter transitions (both up and down) have been a disaster (head flips up) and I've been experimenting with what helps Finn vs what just pisses him off. 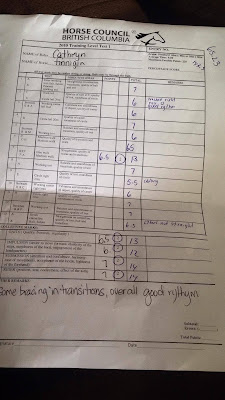 We headed into the arena for TL1 and I stupidly turned right instead of left like I was supposed to (never watch someone else ahead of you, folks... >_<). So after that mix-up, I kinda fell apart during the test. I could feel Finn hollow against me and get bracy in the transitions and instead of riding him, I just ended up being a passenger. We earned a very generous 65.2% for that test.

I was determined to fix my mistakes and ride better in TL2, and I felt that that test was much more rideable. We earned a 66.7%. I also found out what helped Finn in the transition from trot - canter, and it helped piece things together a bit more. He prefers when I continue to post, vs sit the trot when I ask for the transition. I'm assuming this is because I lean or perhaps knock him off balance? Regardless, we'll revisit this later.

The interesting thing about these two tests is that (even spectators agreed), TL1 was MUCH worse than my TL2 test, yet they are only 1.5% of a difference. The rideability, the transitions, the circles... everything was MUCH better (plus I didn't... yanno, go off course). Ah well, it's not like it was a under a showing circumstance, and the individual who sat in to judge the tests is not a recognized judge (she is a local Dressage enthusiast who was kind enough to play judge).

Readers may also note how fucked up my position is in that saddle. Yep, it's pretty wonky right now. Altho, a lot of that can be attributed to the fact that Finn has quite a big swayback. I'm experimenting with half-pads and such to help bring up the seat of the saddle without making the gullet narrow and pinching his shoulders. Despite the wonkiness of my position, we seem pretty effective, which is a bonus.

For those wondering - no I will not be purchasing a new saddle and no, I will not be selling my saddle. It may look weird and it may not be "just right", but Finn is a lease and I don't intend to find a saddle that is perfect for him and I because he isn't staying.

With two tests completed, I headed back to the trailer to untack and wait around for an hour and a half until the jumps would start to go up for the Clear Round portion of the day.

I helped set up jumps with the rest of the riders - I swear, like 15 people showed up just for the jumping stuff while there were only three of us who did the dressage part. Once Finn was all tacked up and ready to go, we headed to the ring to practice over a few cross-rails before the rounds started.

I hadn't jumped Finn since I began leasing him, mostly because the jumps at our Fairgrounds in town are locked away and I don't have a key, as well as, I am completely lazy and don't want to drag them out of the shipping container over to the ring and back again.  In addition to this, I hadn't jumped a course since I took Suzie to the Fall Show last year... and before that... I hadn't jumped in about three years. So yay for being prepared...

I only had my tiny POW spurs on, mostly because I didn't want to accidentally poke him with my rowels on and because I knew Finn had an affinity for jumping from his younger years. I was right to select the tamer spurs, as Finn came alive beneath me after we hopped over the first cross rail.

He was still maneuverable and malleable in my hands, but he was definitely more awake. We only did four rounds, as I didn't want to push it, and despite my own handicaps during the ride he never argued. He just rolled along in a dopey canter and raced down the lines quietly - he didn't even object when I threw him some wonky distances.

We didn't do much more than x-rails, but it felt good to get acquainted with "Jumping Finn" vs "Dressage Finn". The two are so different, yet so much the same.
Posted by Cathryn at 6:53 PM