Better late than never, I guess?

The little schooling show was to take place with Dressage on the Friday evening and Hunter/Flat classes the following Saturday morning. Instead of turning around and heading home Friday night and then re-hauling back out Saturday, I opted to stay the night with my friend who is housing Suzie. It was a good choice, considering Dressage didn't end until roughly 8:30pm and I would've had an hour drive ahead of me to drop Finn off at the barn.

Friday afternoon went by slowly - I had tons of time to get Finn ready and I decided to try out Austen's fluffy dutch braid tutorial. I figured it was the best time to try it out - first show of the year, first time braiding with yarn, and first time attempting dutch braids.... what could go wrong?

I had practiced with the yarn the evening before and it was a bit difficult, since I have only ever braided with elastics. But the second time around was easier and I felt like they looked better. It'll just get better with practice.

After Finn was clean (I had to hot-towel him since it was absolutely pouring rain outside), braided, and blanketed up, I loaded him and Spud up and hauled out to the grounds to watch another friend of mine ride her mare. I arrived pretty early, and ended up leaving Finn and Spud in the trailer since it was pouring buckets. For the next few hours I drifted between trying to stay dry, letting the horses out to nibble hay, and standing in the indoor arena to keep Finn from getting soaked.

As my ride times neared, I peeled Finn's soaking wet blanket and slinky off and saddled him up. A mildly long warm up - mostly walking - felt pretty good, but his right side was a bit hitchy in the sense that he just felt like he wasn't "reaching" as well as he could've. Regardless, he didn't feel "lame" persay.

I rode my first test and had quite a few unfortunate bobbles - I overthought a lot of it and was making myself tense and nervous since Finn's owner was watching and ended up turning right when I should've turned left down centerline (d'oh). The rest of the test was pretty adequate and there was a moment where I went to ride too deep into my corner and nearly left the ring... yikes.

I was pretty embarrassed by it all, but apparently it looked pretty good. I don't remember what we scored on that test (I've misplaced the test) but I believe it was a 58% or something? Mostly because of our pilot error and the fact that the judge marked us down quite severely for him being "lame". The judge also did pull me aside after the test and asked me if I thought he was lame - I told her no, that he felt like he was short-striding but not necessarily lame. I asked her if I should scratch and she said no, that if he is an old horse, its something I just may have to deal with.

So off I went to continue warming him up, keeping him moving, and trying to get him to stretch into his gait. I was called for my second test and as I stepped two paces into the ring, the judge rolled down the window and shook her head, calling out, "I'm going to have to scratch you." 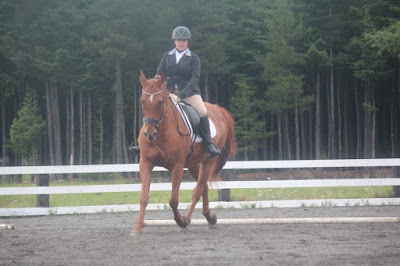 It was probably one of the most embarrassing moments of my life. Having all these spectators watching and listening... I know the judge didn't do it to be an ass, but it was just a shitty situation.

Finn's owner didn't feel like it was a huge deal - she also commented that he was a bit sticky on the left rein but certainly wasn't head bobbing lame. She advised me to bute him that evening and see how he was in the morning.

I went to my trailer and cried with a friend of mine who was holding Spud for me while I rode.

We talked a lot about the fact that it isn't really Finn's fault or my fault... it's just his age and it just sucks. But regardless, Finn's owner and I immediately went to book a chiro appointment (details to follow).

That night kinda sucked, as I was feeling more self-pity and embarrassment than anything, but horses will make you humble and sometimes you just have to suck it up and move on.

I scratched from the four x-rail classes I had intended to do the next morning, and opted to still do the flat classes (there were 3 of them).

Finn warmed up great and although he still felt minimally sticky, he felt much better and a few girlfriends of mines who came out to compete and watch also commented on how well he looked. The adult class was pretty barren - only three of us were competing in the flat.

Finn and I placed second in Pleasure, second in Equitation and first in Road Hack. I was quite pleased with our hack class - his lengthen trot felt spot on!

And since I had pretty consistent placings, I won the adult high point for the flat class division. It was a really good "up" to end my weekend on considering I had felt like a bag of shit the day prior. Still, I had a feeling that Finn needed a good chiro work-up to really pin-point and eradicate some of our issues. 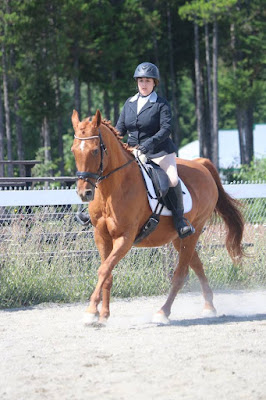 Horse shows can be so enlightening - it certainly wasn't the worst show in history and I'm sure there will be more shows that let me down. But the fact that Finn never changed his amount of try and never wavered just blew me away. Horses are so much more honest than we give them credit for.
Posted by Cathryn at 7:12 PM