I've been pretty blessed with the fact I live in a small "blink and you'll miss it" town, in the sense that when sad/bad things happen, we band together and come out stronger. Even more than that, when there is celebration to be had, we celebrate and come together as a community!

The last few years, I've been in the Canada Day parade as part of a variety of clubs, but mostly as a member of the Horse Club. Since the club in our area disbanded earlier this year, I wasn't sure if I would enter the parade or not. Thankfully, another horsey club had entered the parade and I asked if I could tag along with Spud.

With it being his first parade, I didn't really prepare him too well other than ponying him off of Finn when I rode two days ago. Although, how can only really prepare a horse for the craziness that are parades?
Sometimes you have to just jump right into the craziness because you can't replicate the intensity of the parade.

The morning of the parade, it was absolutely pouring. The rain had damaged some of the cart's decorations, but by that point I just wanted to get it all over with. The crepe paper was not the best idea for the shafts.

Spud was good to hook up and he seemed to drive okay to where the other horse's were. My nephew was with me, as he wanted to be in the parade as well and when we got closer to the other horses, Spud threw on the brakes to take a look. My poor nephew was not holding onto the side like I had told him and threw him forwards and off the cart. Thankfully, the kiddo is tough and he didn't really splat on the ground - more or less just tumbled out of his seat. I propped my leg up against his, had his one hand link with mine, and the other hand holding the cart handle - this seemed to work and stopped any other kind of jostle the cart took.

While we waited for the parade to start, Spud started to get amped up. He wasn't necessarily "bad", but would just slam on the brakes and then lurch forwards like a complete asshole. He was also trying to take a look at everything while a million children decided to swarm him and poke/prod all his gear and ask me a billion questions.

So after wanting to slit my wrists - and screaming at a young girl because she decided to slap her friend REALLY LOUDLY and push him RIGHT BEHIND MY CART - we were ready to go.

Some of the other horses were getting impatient and Spud felt very, very light up front and frustrated. You could almost tell he was getting pissy because he could hear all these horses moving, but he couldn't see them (blinders), and none of them were his friends so he would whinny to them but no one would reply. 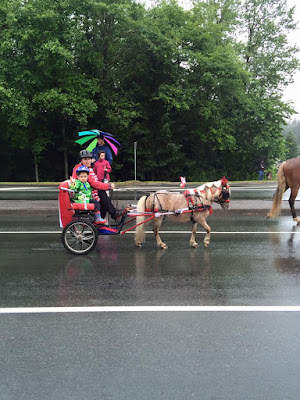 We had very lurchy starts and stops, and during the first 10 minutes, he threatened to rear on me twice. I could feel him get super light up front but had no real place to "put him" so I could get him past the lightness-feeling. There were horses in front of us, horses behind us, and people on either side of us. Instead of fighting with him, I remained super quiet on the reins, but had to realllly keep him in check because he wanted to jig the entire time.

He settled down throughout the parade, which was great, but the intermittent sirens, loud music blaring, people throwing candy to the crowds, people jumping up and down, horse's acting up, and people waving their umbrellas around (literally waving them), he was beyond over-loaded. I could just feel how saturated he was and I just spoke softly to him the entire ride and started to treat it as a schooling session vs waving and screaming "Happy Canada Day" back to all the spectators.

My nephew left the cart about 3/4 of the way through the route to go be with his mom again, as we were both SOAKED through our clothes and the poor guy was shivering. I was kind of glad he got out, so I had one less person to worry about. Several times I positioned myself behind a horse so that we had something to make Spud "stop" should he blow through my aids.

I never really felt "out of control", save for at the beginning and had I believed he would run-away or cause an accident, I would have hand-walked him. He just felt very animated, tense, and flighty but not necessarily un-driveable.

So was it a success?

Kind of. He did worse than I thought he would've, but we went out and did it without any major catastrophe, so I call it a win. We'll have to enter more parades in the future though, because the only thing that will make him quieter is going again and again.
Posted by Cathryn at 7:43 PM