I'll admit it - I've been MIA for the last week or so on this blog because of a few reasons:
Unfortunately, like #3 already alluded, I don't have anything particularly interesting or ground-breaking to report with any of the horses. Things with Finn have continued to progress and we are now up to 30min of consistent work in the arena, which is fabulous for a 21 year old horse who has had the last 2 years off. I plan on working up to 45min at least before I seek out any kind of lessons or coaching.

On Monday, I hacked Finn out over the gravely/rocky trail to the Fairgrounds. We had a pretty fabulous ride and I found he was quite malleable - he just really need support from his rider to continue to keep himself together. Our down transitions, namely canter to trot leaves much to be desired, but we've had a few good transitions in that department so I am holding out hope.

Since I didn't want to overdo Finn walking on gravel/rocks again like I had previously, I opted to haul him to the Grounds for our next schooling ride with Suzie tagging along. She seemed a bit sad the last time I haltered Finn up, so I wanted to take her for a little jaunt.

Earlier in the week I had noted Finn's nose had been a bit runnier than normal, but hadn't really paid much attention until he unloaded from the trailer with thick mucus running from both nostrils. I immediately messaged his owner, thinking that perhaps us putting in a new roundbale caused some issues with him. Owner feels that he has a little cold and told me to keep riding him (within reason, of course, and nothing too streneous). He had no temp or any other issues to show he wasn't feeling good. Thankfully he doesn't really get a goopy/runny nose unless he's sneezed or been slightly anxious (ie. his nose started to run in the trailer because I unloaded Suzie first so he was snorting for her). Still, a bit of a bummer as it seems my horses just keep hurting themselves or getting sick!! Someone stop poking my voodoo dolls with pins!

The ride on Wednesday was good - I didn't push him too hard since he was a bit sick but the owner and I felt it would be good to get him moving to help shake loose any mucus or phlegm. Unfortunately, there is no media from the rides, but they were productive. I've left Finn alone for the last two days to get himself better. He's improved quite drastically the last two days, so I'm itching to get him going again and also to finally bathe him (I was going to on Wednesday, but with him being a bit sick I didn't want to have him catch a chill despite the hot temps we've been having). In addition, I've been lathering his hooves with venice terpentine to help firm them up a bit as well; hopefully it helps.

After riding Finn on Wednesday, I putzed around on Suzie  since she looked like she wanted to get out and do something; and boy was she was just a little firecracker. We did some bridleless riding and a wee bit of cantering, as it seems like it is more comfortable of a gait for her than the trot. The entire ride lasted less than ten minutes, but her ears were pricked and she strutted herself across the arena at the end. I do have a bit of exciting news to share in Suzie-land, but for now it'll have to wait.


Spud is doing well - I hadn't taken him out in about a week but pulled him out for a 7k drive this afternoon. He still has the head-shaking, but it was actually less than it had previously been. I feel as though it is a seasonal thing, which is a bit of a relief. I have some ear bonnets coming in the mail and a nose net as well, so we'll experiment with those and see what he likes best. 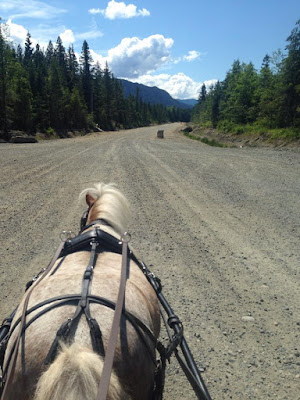 Things will be getting a bit interesting soon enough - Spud has a clinic on the 19th - 21st, Finn has another Percentage (Ride A Test) day on the 25th, and there is some cool Suzie news coming soon.