The last three days have been chock full of learning new things, experimenting, and a crap-ton of hauling. With the onset of the Kathy Stanley clinic, I had a few things I wanted to work on and a few things to experiment with.

This would be the second clinic I've ever taken with Spud, and it would be with the same clinician as last year, so I was a bit nervous and excited to see how well we had progressed considering the first clinic was spent mostly at the walk... especially after he reared under harness. But still, despite that mess, I was excited to learn something new since I felt Spud was more grown up and more schooled than the previous clinic.

Thankfully, I didn't have to travel as far for this clinic and opted to haul Finn out as well to make use of the Fairgrounds and ride him after my driving lessons on the Monday and Tuesday (today).

Sunday was the first day of the clinic and I hauled out a bit early since the horse chiropractor was up in the area and offered to take a look at Spud re: the head shaking issue we've been having. Much like I had anticipated, Spud was out in his poll and was quite reactive to the treatment, which included many licks and chews afterwards. I would've preferred to have had him adjusted after my lesson, but with the time constraints the body worker had since she is not local, I had to make do with what I had. Other than some other mild body soreness in his left loin and another portion of his mid-neck, Spud was pretty solid all over.

After he had been worked on, the poor bugger tried to go to sleep and I rudely had to wake him whilst I tacked him up. I had a feeling that he was going to be a bit pissy during the lesson since most of the time, body workers prefer to work on a horse after their work-out or during their day off.

Unfortunately, Spud head-shook during this lesson, but I'm quite confident that it was due to the fact he had just gotten adjusted and then we worked on Dressage-type stuff in the lesson. Despite the head-shaking (which was mostly whenever we went from a trot - walk for the first few steps or so), he worked quite agreeably and we made some good progress. Mostly, we experimented with his extended trot, a bit of long and low walking, and establishing a more forward working trot.

The main take-aways from Sunday's lesson were: 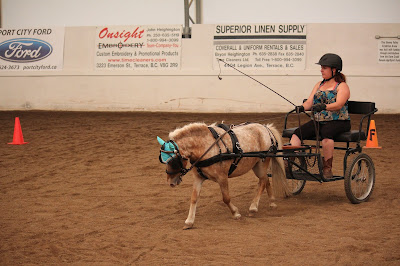 The clinician was quite happy with how much we had progressed as a pair and even commented how fit Spud was - at one point during the lesson, she told me to let Spud walk and catch his breath and when I did, the clinician stuttered and said, "Oh... he's not even breathing hard." I mentioned that I hadn't done much "dressage" stuff with Spud this year, and it had been more or less marathon-type work-outs.

I felt like Spud wasn't totally on his A-game, but at the same time, he was pretty cool with whatever I threw at him and gave me 110%, even when he had no real idea what I was trying to get across. And that felt pretty cool.


Which brought us to Monday, Day Two. 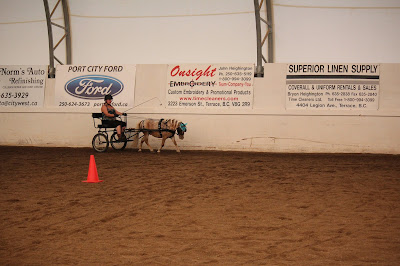 Surprisingly, there was absolutely NO head shaking at all. I felt more like the adjustments he had been given had "settled" in more. Most of this lesson was spent establishing bend to both sides evenly, riding true circles, and playing with a bit of a cones course. A few little "bad habits" popped up and were able to be corrected, which was nice.

Some of the key points from Day 2 were:

Most of the day was playing with rein length, the severity of half-halts, and roundness. It was fun to see Spud "argue" about bending left and once I gave him that little 2cm of rein length, he arched around the circle and was much more comfortable and agreeable. Not only this, but the clinician actually complimented me on Spud, saying that for being mostly self-taught and having only taken one clinic previously, we were quite advanced. 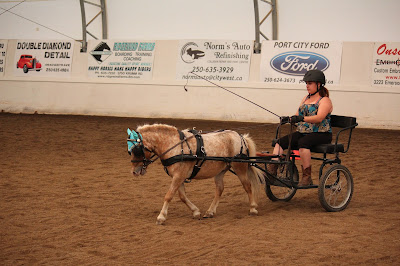 My heart sung a little bit, truthfully. It was nice to see our hard work pay off, even so much to have a clinician who barely knows us sing our praises.

Which brings us to Day 3, today. 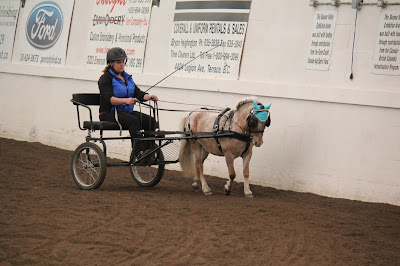 The feel-good vibes continued and we spent more time working on circling, balance around corners, and ended the lesson with practicing the first portion of a Dressage test (ie. A enter working trot, X halt/salute, proceed working trot, track L/R).

Spud felt a bit more tired during this last lesson, mostly because I think the things we were working on were much more technical and used all kinds of different muscles he hadn't needed to use yet this year. Self-carriage is so different in driving dressage-land vs long-trotting down a forestry road. So with that being said, doing the dressage stuff is very demanding, very physical, and very mentally-involved work. I could feel him sizzling out, and I knew I would have to get after him a bit more.

And I wasn't wrong. We had some mild disagreements which stemmed from his lack of energy and one which came about because Spud suddenly decided he didn't know how to bend right. After I "won" that argument, we quickly moved on to something else.

We really nailed the A enter working trot, X halt salute practice runs after a few botched attempts and the clinician was really, really impressed with how well Spud had done over the three days.

Some of the take-aways were:

In truth, I am pretty happy with my little mini right now. He's starting to become less and less green and more and more like a competition horse.