In truth, I haven't felt much like blogging... Nothing exciting has really happened and I'm battling a questionable issue Spud has acquired over the last little while which has battered me a bit emotionally... This is in addition to taking the hit of Suzie being retired... and then the hit of Finn becoming foot-sore.. I am sincerely hoping the old adage of "bad things come in threes" applies here and I am done with bad-luck for a while...

Finn is doing great - I hacked him out a few days ago and he is still sensitive on the rocks but is willingly tracking up and moving forwards without any kind of issue. Unfortunately, I have not been able to find ANY used hoof boots in his size and I just don't want to bite the bullet and purchase brand new boots for a horse I'm going to have for four months... In addition, most of the sites that have these boots for sale are in USD $, and the conversion is just insane at the moment. $400 for a set of four boots? No thank you.

I think I'm going to just invest in some duct-tape for now and wrap his hooves when we hack over to the Grounds - it is literally a 20min hack and only about 5min of it is rocky.

If anyone has any of the following up for sale, or knows where I can find some good deals for a 5"x5" set of hooves, please let me know. I've done the following conversions and these are the sizes he "fits" into:

Cavallo boots - Size 3 in any variation of the boot.

I plan on riding him at the Grounds tomorrow and getting some more real work in since I just puttered around in the back paddock the other day and lunged him. He was responsive, but the area in the back paddock isn't very large so it was a bit frustrating to him to not have much room. 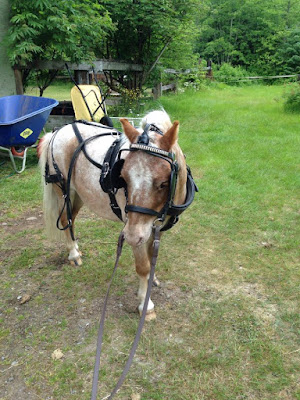 Onto the topic of Spud - he has started head-shaking a bit in harness. I first noticed it several drives ago, but it wasn't anything more than what I would assume was ear irritation due to his hair or bugs. I've initiated getting some custom bonnets for him but they haven't gotten here yet so I had resorted to braiding his hair or banding it down to prevent it from tickling his ears. I had also peeked in his ears and I didn't see any indication of sores, pain, etc.

^Video from Sunday night.
Unfortunately, during a short walking-drive on Sunday, Spud's head-shaking was WAY worse. It was almost violent and nearly every few steps, so I got out of the cart to check his tack, remove his noseband, open his blinders wider, undo all of his elastics and braids to see if one was pulling tight... etc etc. Nothing helped and I went home feeling a bit frustrated, but determined to help him out.

^ Monday morning drive.
The following morning I headed out and drove him again, this time I re-fitted all of his tack which had just been freshly cleaned, removed his browband entirely(thinking it was digging into him), and widened his blinders even more. This drive wasn't as bad as the day previous, but he was still head-shaking and it was puzzling me.

I messaged Spud's old trainer and asked her thoughts and she pretty much echoed what I had already had been thinking. Perhaps the bridle was causing pressure points. So I decided to drive him in his little western bridle - I was admittedly a bit nervous, as I hadn't driven him open (no blinders) before, but he actually did really well. He was a bit more "uppity" than he is with the blinders but he wasn't unmanageable. Unfortunately, the head-shaking was still evident.

As we returned to the barn, I decided to check in his ears more thoroughly. I clipped them to begin with and then started to swab with cotton balls. (Spud HATES having his ears touched, so it was a super fun time for both of us). I found that he had clumps of hair and wax in his right ear, so I cleaned it out, massaged the ears with mineral oil and felt so hopeful that THAT was our issue. It had to be, right?


Feeling hopeful, I headed home and figured I'd give Spud the next day off to get used to his "new ears". I went out today with the intention to drive, but I just didn't feel like doing much since it was still raining on and off so I put him out on the lunge and I still have a head-shaking pony.

In truth, the shaking has become less and less, which is fantastic... but I still scheduled a body work date for Spud just to be on the safe side. He reacted slightly to having his poll squeezed  but I'm not totally sure if it's a "ow" reaction or a "omg she's going to touch my fucking ears again" reaction. I am feeling a bit discouraged and truthfully... a bit scared. I don't want him to become a pasture pet like Ms. Suzie - having to retire one horse was sad enough and Spud is just in his prime.

So while I think the retirement thing is a bit extreme, it is still a really bleak possibility (altho I'm sure it is just my anxiety talking at this point and time!). 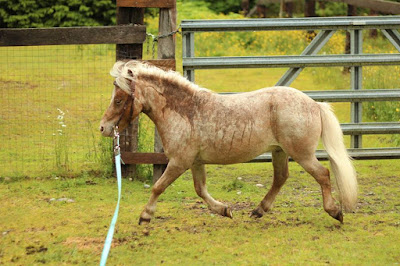 I'll exhaust whatever options I need to to get him well again. Fingers crossed the body work makes him right as rain, because I am sorely missing my little driving pon pon. Like a friend of mine had mentioned - Spud has been out A LOT more this year and he's been on some really challenging rides, so there is a huge possibility that he is body sore and wherever he is tensing himself because he's sore, is adversely causing the head-shaking. It's an interesting perspective, no doubt, and I hope she is right.

Not much right now in Suzie news, other than she may be going out to a green, savory pasture at a friend's house for the Summer - details to come!
Posted by Cathryn at 11:26 PM