We Do The Water

I've noticed that I only really drive Spud when the weather is good - meaning sunny, warm, and dry. There isn't much wrong with that other than the fact that it doesn't really prepare Spud for hacking out in the rain. You'd think that it wouldn't make much of a difference to most horses, but some take great offense to getting hot and sweaty when it's raining and having water droplets drizzle into their ears. I figured it would be a fantastic schooling opportunity to get him out in the rain, as well as schooling some water hazard practice. With it being so hot and dry lately, there isn't much out there for water crossings or puddles.

Spud was really great during the hack out - I played a bit more with his collected trot and lengthen. He really doesn't understand the concept of collecting, or why he has to keep pushing off his hocks but go slow. He figured it out pretty well, though. I also found he was starting to settle more into the contact - he'll fight it for a few strides and if I just stay constant and soft, he stays with me. 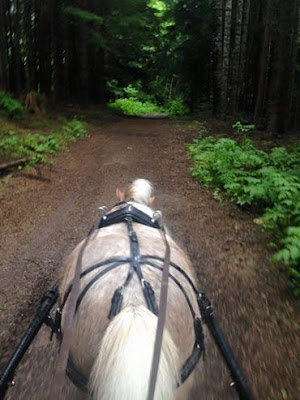 We trekked through a few puddles, at both the walk AND trot... GO PONY GO! The first few puddles he stopped, lowered his head and snuffled at the water before walking on. With the trot, he'd lower his head and let his lips touch the water while he trotted through.

It did start to pour on us, and he seemed pretty unphased by it, which is good. I have noticed that he shakes his head during the trotting and wasn't sure if it was due to his hair - which is why he got a stylin' do for the hack. It didn't seem to improve or worsen, so I've ordered a ear net to see if that will help him. It isn't disturbing to him and it isn't violent - in fact, no one really notices it but me. Just one of those quirks, but I'd like to see if I can help him out a bit. He is quite sensitive about his ears being touched regardless, so perhaps the wind and such floating down his ear canals bothers him.

The rest of the hack was uneventful, save for when we started to head home. Spud decided it'd be a great time to keep breaking into trot despite me wanting him to walk. He got a great dose of "NO" from me, and he worked quite well after a very minor hissy fit. He did, however, become a bit of a piss-head while we were trotting back home.... He likes to try and evade the contact when he gets pissy and will literally curl his head into his knees and cock his head to the right. I did a lot of "give and take" with him to get his head unfurled but also keeping his pace even.

It took a little while, but he settled back to me and I was able to work with him again. He kind of floated between that "I'm DONE" and "Ok fine I'll work with you" mode. I realize he is green, but it's time that the ante is upped. Unfortunately for him, it's time to grow up and that includes becoming more of a "Yes ma'am" pony. Sorry, bud!