I had meant to post about Spud's killer conditioning drive back on Sunday, but I was too excited about Sir Finnegan joining the herd. Sorry, Spud.

I loaded up the horse trailer and the Boyfriend and I hauled into town with Spud, parking at one of the recreational facilities which backs onto a myriad of quad and vehicle trails. The goal was simple - get some good conditioning work in. I didn't care to have any kind of bend, perfect head carriage, or anything of that sort. I wanted Spud to put in some decent mileage, be cautious of his footing, and be able to make his own decisions when I couldn't provide him with a concrete answer.

And he didn't disappoint. 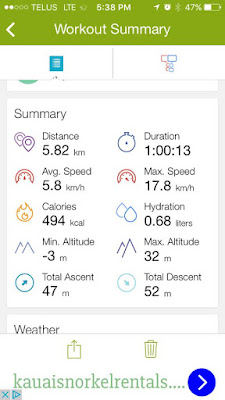 Not bad considering both the Boyfriend and myself were in the cart. (I do realize some people are going to say "That's so mean, omg, minis are only meant to carry one person at a time in the cart... blah blah blah". I will preface by saying that Spud's trainer, the one who broke him to cart was a large lady. He had no issues pulling her around safely. And in addition, Spud is not a small miniature - a lot of "A" style minis are 28" or so while Spud is a towering 36".) /endrant 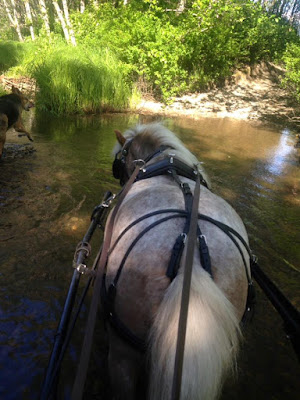 Spud did really well - we covered a lot of different ground, including sand, some water crossings, and rocky terrain. He did have more of an issue on the rocks, which made my decision to get him some booties a bit more solidified.

Other than that, he was game for whatever I threw at him - including one of the largest water crossings I've ever asked him to drive across. Pony plunged in and didn't look back - good boy.

He trucked along at a trot for most of the drive, save for some instances where he came down to a walk when the trail got a bit tricky and he needed to be a bit more refined. There were some parts of the trail where he chose the best route and I allowed him to. It was refreshing to see him figuring it out and calculating the distance he'd need for the cart - he was such a shy little thing that he's now blossoming into a pony who can make his own decisions. #don'tneednoman It was also quite windy during the day, so Spud didn't sweat much save for his ears, a bit on his chest, and under the tack. Since the Boyfriend and I didn't complete the loop and instead, veered off trail to finish at the MIL's house, I fed the pony carrots while waiting for the Boyfriend and the MIL to return with the truck and trailer from the recreation facility.


We finished off the inpromptu drive in town with going up to my Grandma's house and having Spud climb up the stairs onto her deck while she fed him apples. She cooed over him and told him how handsome he was and then she immediately decided he was filthy and gross when he slobbered apple juice all over her deck. Sorry, grandma.

Oh, and since the Bad Horse Lunging Session the other night, I haven't had an issue catching him since. In fact, he has even been walking up to me and patiently waits to be haltered. Good little pony. Maybe now we can focus on refining our turning and working on a mock cones course like I had planned a few days ago.
Posted by Cathryn at 8:18 AM