Much like the mad mooles featured on Andrea's blog the other day and the ever-expressive Courage, Spud decided to have some srs opinionz yesterday afternoon.

I had bathed both horses to get the rest of winter fluff, dirt and grime washed away (and also because I will be clipping Spud later today). Since I didn't want to turn either of them back into the paddock where there is fantastic rolling-size patches of dirt, I temporarily fenced them into the front yard. 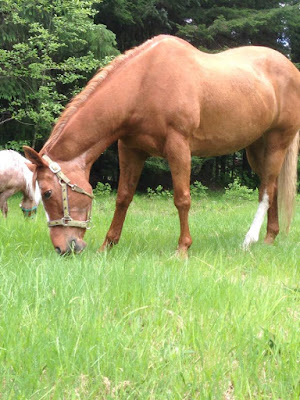 Not wanting Spud to eat much grass, I waited until he was mostly dry and then kicked him back into the dry-lot and left Suzie to munch away. After putting away the bathing supplies and picking poo, I decided to do some cone-work with Spud in the back pasture.

And this is where the games started.

Spud decided he did NOT want to be caught. Like - at all. I'd LOOK at him and he'd take off galloping and grunting.

If any readers remember my previous post about pet peeves, unwillingness to be caught is high on that list. Previously, Spud has been a bit more difficult to catch but it usually takes no more than 2 minutes to get him haltered. Yesterday, however, was the worst I have ever seen him.

In truth, I was starting to get seriously pissed off about 10 minutes into chasing him so I figured I'd better grab the lungeline because hooking him up to the cart while I was in a bad mood would do neither of us any favors.

After 30 fucking minutes, I caught him. And only because he went down along the dead-end of the fence-line and had nowhere to go.

He was immediately thrown out onto a large circle and for the next 30 minutes, lunged quite vigorously.

And ironically enough? The fucker wasn't even tired. He could have trotted for days, I think. His eyelids, chest, and ears were sweaty, but he didn't seem too lathered.

I finished walking him out and then tied him to the barn while I groomed Suzie and fly-sprayed her down. He cocked a leg and started to snooze, which immediately made me feel bad about making him work that hard. 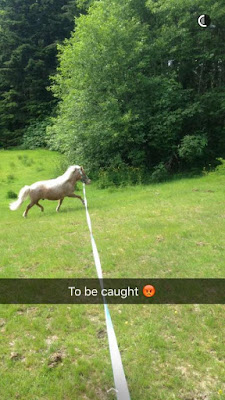 Hopefully this is the last of whatever kind of rebellion he chalked up in his head, because I prefer to have productive work rather than arguments and the like.

Email ThisBlogThis!Share to TwitterShare to FacebookShare to Pinterest
Labels: bath, refusing to be caught, spud