Since I don't have much new media or any interesting blog-things to discuss, I thought I would throw another blog-hop out there. This blog-hop, or perhaps a hop of it's kind, probably has already surfaced through the blogosphere, but mine is going to be a little bit different.

To play along, it's relatively simple.

While I realize that some of the horse's in blogland may be for sale in the future, it still might be funny to blog about their quirks or "oopsies" during their training time.

So here we go! 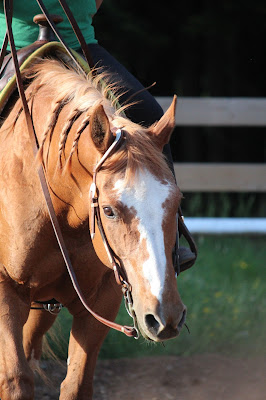 For your consideration: AQHA mare, "Suzie" lives up to her registered name "Quick Little Coosa". Well... mostly the two first words. She is a 1993 model - think old style Ford F-250 powerstroke with occasional rough start-ups after a long Winter.

Suzie is a sensitive ride, so putting your Boyfriend on her to go for a little jog around the ring isn't probably the best idea (ask me how I know). But if you know how to ride, she is a pleasure to ride - and just a fair warning, don't ride her like an English horse. She'll dump you on your ass.

This mare has an affinity for the fast paces, especially at shows. But to be fair, she is an older mare and has flash-backs to her previous days as a Drill Team and Barrel Racing horse. Events wherein there is a multitude of "energy abuzzing", Suzie can get a bit uppity but it is quite manageable under these circumstances.

She has shown in pretty much anything and everything - and despite her barrel racing background she pinned rather well in the Hunter ring.

Despite her love for the fast paces, Suzie has had extensive work done to her front left shoulder due to old injuries. If you'd like to bring a 4-H or Pony Club Horsemanship/Stable Management class over to feel the lumps and bumps on her legs and have a guessing game as to how they got there, feel free. She is a fabulous poster child for, "this is what a _____" looks like. But no worries, her legs have always been tight and cool (even after long trailer rides).

She doesn't really *like* her pasture-mates, unless you remove them. Then she's super sad pony x1000.

Other than that, she's a pretty little thing to admire in the pasture and her blaze is kinda neat. Sometimes you can lead children on her - and sometimes she'll spook pretty hard, but it's kinda a learning curve for kids to have a proper seat.

So yah... if you want an old fiery chestnut mare with a running complex and a banged up shoulder, look no further!