In order to take my mind off my current broken pony and the feelings of guilt, anger, and frustration, I asked the ladies out at the Totem Saddle Club (in the next town) if I could join their Fun Gymkhana this past weekend. There was only one catch; I wanted to bring Spud and his cart.

After the TSC Executive committee looked over their Gymkhana rules (this was a "Fun" Gymkhana, but usually they are competitive and riders earn "points" for the year end banquet), they allowed me to attend this particular event since it wasn't for points. It was nice they allowed it, considering driving horses are not really the best competitors for your average Gymkhana. 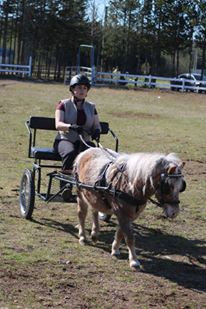 My goal for this outing wasn't to be the fastest or even really "compete" because let's be realistic... this is an odd event to attend with a driving horse.

No, my goals were simple:

It wasn't very difficult to achieve all of them, and the only one I was truly interested in was standing and waiting. If Spud is going to become a competitive driving horse, he better get used to the hurry up and wait lifestyle.

I was running behind by the time we had left town and after frantically contacting someone at the event to let them know I was running late, I came to the realization that the category the had put me in was last - perfect! 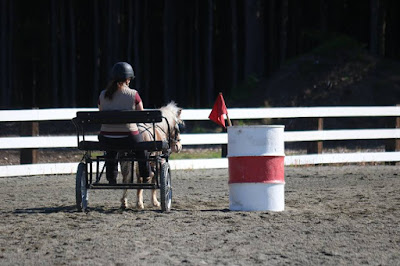 Spud hauled great and once we got to the grounds, he settled quietly while I unloaded the cart and started to rig up his harness. He was a bit antsy when I went to put the cart to him, but after a reminder on what "whoa" meant, he was just fine. I drove him over to the herd of horses and spooked a few of them (I am kind of mean because I laugh when they spook at him).

We had about a 15 minute wait before the first event, which was the flag race. He did really well, despite being a bit of an asshole and deciding he wanted to turn left back to the out-gate and when I firmly insisted we move over to the right, towards the barrel to put the flag back in, he reared. It was quite a small, hissy fit rear and I continued to work through it as the hoards of people watching cooed "Awww". I guess miniature horses look cute when they rear...

The rear itself wasn't very malicious, just more of a "I don't wanna". Once I left the out-gate, I had a gentlemen tell me that, "Oh it's okay he reared, it's not like you ride him." I kept my mouth shut and parked near the in-gate, slightly steaming over the fact Spud acted like a total ass.

I was hopeful to redeem myself, and throughout the wait until the next class, Spud stood like a rockstar as several kids and people came over to pet him, chat, and a few friends sat in the cart with me. He was quite the "accent" piece and pretty much everyone who passed him, stopped to chat or pet him. Lucky boy enjoyed the lovings. 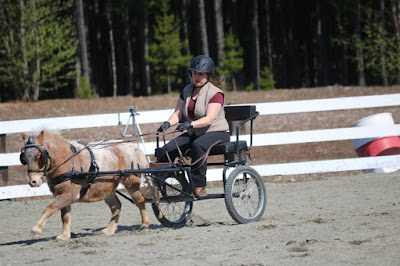 Next event was poles and he did really well, considering we had to do some pretty tight turning and I pepped him up to the trot. And again after the event, we sat and waited.... and unfortunately could not compete in the next event since it was scurries... So I popped out of the cart and stood beside him (I realize at a driving show, this would not be allowed, but my ass was serious hurting). Spud was pretty good, he did shift back and forth a few times just because he was starting to get bored and after I exited the cart and stood with him, he started nibbling my pants and such... Poor guy was bored out of his skull!

The last two events were figure eight and barrels, which were good. I was a bit frustrated because there were some pretty deep ruts from the horses in the ground by the time it came around to our turn (they were raking, but since I was the "last one" they didn't want to rake again) and it was a bit difficult to trot through... I felt kind of bad asking the committee to rake the ground during our barrel run, but once they did, our run went way smoother. 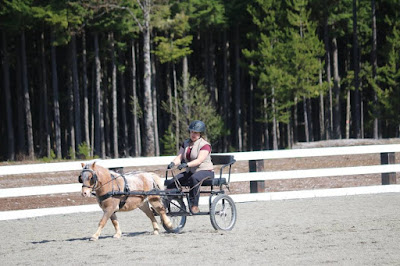 All in all, it was a successful outing and Spud acted like a total rock-star. Suzie was quite annoyed all afternoon and apparently kept neighing, but otherwise was well behaved. I'm pretty pleased with Spud's attitude and his overall work ethic during that outing. I don't intend to compete in any more gymkhanas, but it was a good way to get him out, used to standing around, and try something new! 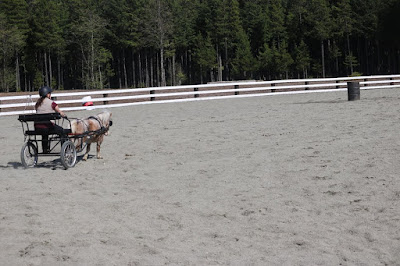