Moments of Clarity - A Suzie Update

I had been avoiding blogging about Suzie for the past while, as not much had changed and I was pretty uncertain where I wanted to go from there. Truth be told, yes there was improvement from the 1st Chiro and MT that we had visited, but I felt like there was more missing. The 1st Chiro didn't do much adjustment, if any, to her shoulder and I felt that while her hips may have been a primary issue, the shoulder just HAD to be secondary. 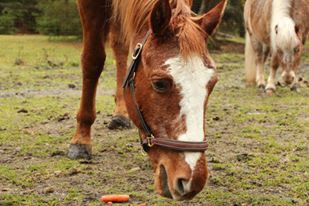 After hemming and hawing about what I needed to do, a friend of mine let me know an Equine Therapist was coming to town (she comes up once a month) and to give her a try. It's not that I was skeptical - I just didn't know this lady from Adam and as most horse owners know, it's hard to give someone a good honest try when you are trying to get to the bottom of something as serious as lameness.

I did, however, message Janeen and we talked back and forth before I made an appointment for this past Monday. She had done two years of university studies in Equine Therapy, and had been practicing throughout the Northwest on a variety of horses with great results (I also spoke to a few people who had used her for their horses). 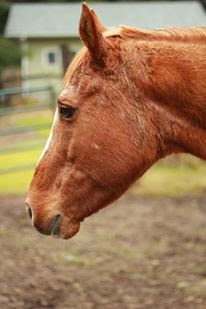 Prior to Janeen meeting Suzie, I flooded her inbox with videos and the longest recount of Suzie's history ever (sorry, Janeen!). I wanted her to be up to date on anything and everything Suzie related, especially in relation to this particular incident and lameness issue.

Monday afternoon I met with Janeen and drove in to the barn together. Suzie was standing over in the corner and I haltered her up and brought her out so Janeen could evaluate her.

I'll let the chart speak for what she found. 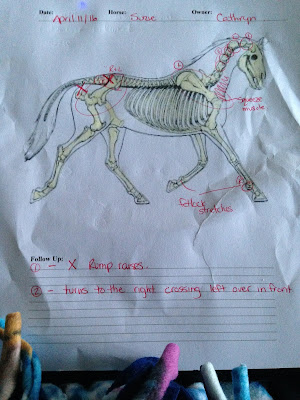 In the neck, she was out in her Cervical Vertebrae; C-1, C-2, C-3, C-4, and C-5. Once Janeen started to work on the C-1 and C-2, the rest of the vertebrae more or less "slid" back into place, which was good. As you can see, each of the red circles on her vertebrae have the letter "L" on it. This means that she was "out" on her left side, which is hugely interesting to me.

Next was her shoulder - the left scapula (like I had thought) was quite out. The interesting thing that Janeen said was that the muscles that span across the lower portion of the scapula were atrophied into her flesh - the other muscles that run across the top of the scapula were being overworked and thus, that is where the big bulge comes from (she is overworking the wrong muscles in her shoulder). Janeen commented that Suzie is quite "careful" about stepping onto her left leg during the "walk out" we did before the real adjustments began.

And interestingly enough - BOTH sides of her hips were out. Now, you'll have to forgive me, but I don't remember which side of her hip was more "up" and which was more "down", but they were still quite out from what Janeen said. Ignore the red X's for now - they don't mean anything bad.

Lastly, Suzie's right fetlock joint was quite "crunchy" (as per Janeen) and she (Janeen) thinks this is due to Suzie compensating with that fetlock. Interesting nonetheless.

So after all the adjustments we talked quite a bit about Suzie's future - Janeen said she sees a pretty positive diagnosis for a full recovery and that it will take time to heal and fix, especially with so many problems. 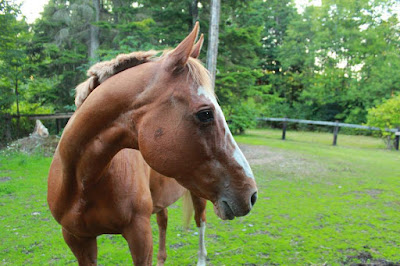 For right now, my homework is in stretches; rump raises (the X's on the photo depict where my hands need to be in each set of the raises), fetlock stretches, muscle releases on the lower portion of her scapula, and circling tightly to the right to cross her left leg over her right leg. In addition to this, no riding for a week and I can start hand-walking at any time and once a week is up, start with walking rides and work up to trotting. I asked what if Suzie is still lame/sore and Janeen gave a reply that made me think of my Mom, "We'll cross that bridge when we come to it."

I feel as though a lot of my questions were answered in this session and I had a lot of positive feedback to begin healing my mare. I was speaking to a friend of mine, in how it is interesting how some Chiros (this applies to Vets, Farriers, Trainers, etc!) work for some people, but they don't work for others. I have no ill feelings towards the previous Chiro or MT, as I believe they do know what they are doing and they were truly trying to help. I just think that perhaps their methods are a bit outdated and they may have missed the entire picture based off of Suzie's multitude of injuries.

So while we are not out of the woods yet, I feel pretty hopeful and that's so much better than the helpless feeling I've had the last few weeks. As of now, Suzie has been lame for nearly 4 weeks and slowly but surely, we've been chipping away the issues and making some progress. I'll keep on chipping away, making Suzie's comfort my first priority and continuing to better myself as a horsewoman.

I don't expect to have much of another Suzie update until next week when I start to ride and *maybe* lunge to see "what I have", but I'm trying to not obsess over it so much. This entire ordeal is going to take more than just a few days to fix, and just NOW I feel like we've reached a turning point. 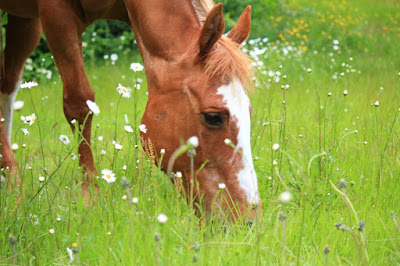