To preface - I am a bridesmaid for a friend's wedding which will be occurring in August.

This past Saturday night, there were some bridesmaid shenanigans going on that I needed to attend and since the bride is from the next town, I was offered a place to stay at the bride-to-be's farm. Knowing there would be alcohol and it would be quite late, I opted to stay over at her place. Since most of the bridesmaids are horsey-orientated, the bride-to-be offered a paddock for my two to stay in. I graciously accepted and hauled out Saturday afternoon.
The bride-to-be was in a Dressage Clinic all weekend with her young mare, so I met her at the Fairgrounds since I had never been to her new place yet (they had just bought the farm not too long ago). After her lesson we trailered down to her place and almost immediately saddled up our old mares and headed out for a trail ride. I stupidly forgot my cinch and a saddle pad for the Western saddle, so I had to use my Dressage saddle which was interesting... 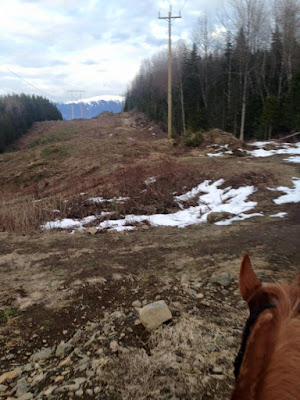 Suzie did quite well considering she can be quite strong while hacking out and I've avoided doing anything more than a trot on trails with other horses due to this. I was quite pleased she was more or less quiet and respectable to my aids as we puttered along the roadway and into a Forestry Service road. We stopped on the road and Suzie immediately started backing up, flinging her head, etc etc. I think it was more nervous energy than anything malicious, so I just went with it. She was sweating from her ears before her chest was even sweaty, so I knew for sure she was just nervous about being in a new place with a new horse. She is the same to show. 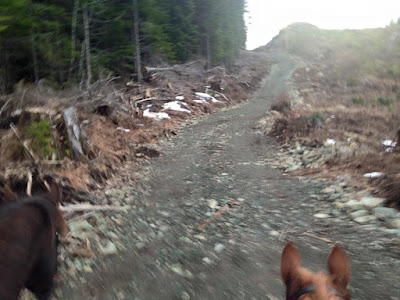 We did end up cantering along together and Suzie kept up with Nifty and came back down to a quiet walk, which was fantastic to see. Throughout the hack, Suz kept looking everywhere - taking in the entire situation. She felt good, very forward and swinging through her head and back. It was a good ride, but the blocks on my Dressage saddle were beginning to irritate me.

Upon arriving back to the farm (where Navarro (Nifty's pasture-mate) and Spud were going completely bonkers) we stripped tack, I put a cooler on Suzie, and put the mare's away in their separate paddocks. It was only an hour or two before we had to leave for the bridesmaid festivities, so the horses were fed and watered before we left.

The next morning I was super excited to wake up, as the window in the guest room overlooks the paddock my two were in. I was able to watch them for a few moments before going back to sleep to catch a few extra z's. 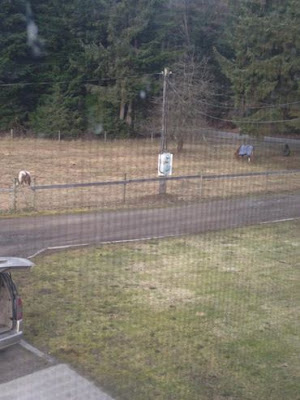 Once both the bride-to-be and I were awake, we hitched Spud to the cart and drove the "wedding route". Oh, I don't know if I ever mentioned it before on my blog but Spud is going to be in the wedding as well. That was another reason I brought the horses to sleep-over... the bride-to-be was nervous about a particular bridge that I would have to drive Spud over and wanted us to practice a few times.

Anyways, she needn't worry because Spud was cool as a cucumber. He neighed a few times for Suzie, who stayed behind, but was pretty amicable driving out on the road and across not only one but two bridges. My friend even drove him and she was very surprised at how quiet and easy he was - I was beaming at all the positive attention Spud received!

We did have a few baby moments wherein Spud neighed for Suzie and immediately picked up a trot, but he was easily controlled and attentive. Unfortunately, near the end of our drive we noted one of the tires was leaking air, so we didn't get to canter him or play around too much after driving the route for the wedding. I didn't bring the bike pump with me either, so I'll have to remember that next time! (No photos of Spud being driven, sorry!)

As soon as Spud was unhitched and untacked, both him and Suz were re-loaded to head back up to the Fairgrounds. My friend's ride with her green mare wasn't until later that afternoon, but I wanted to ride Suzie at the Grounds before her lesson.

In some exciting news, a friend of mine who lives over in the next province (I was also a bridesmaid at her wedding) finally got to meet Suzie and Spud! Ahhhh! I was so excited. 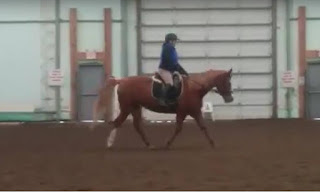 Anyways, I rode Suzie in the indoor during the clinic's lunch break and she was feeling pretty sassy since Spud was outside and don't you know he's her BFF. I did get some decent work out of her, but she felt quite stiff and it took a lot of work to try and supple her. Unfortunately, she started to get sore 3/4 into our ride and I attribute that mostly to the fact that she is out of shape at the moment and prior to that day, I had already rode her 4 days with three of them being relatively "difficult". I got one more trot out of her before calling it quits.


The video is certainly nothing special - you can see how Suzie is really struggling with the idea of contact during the first serpentine. It looks like she is lame, but that isn't the case. She's still quite fidgety with her face right now and you can see after I instill more "forward" (I have no idea why I was JOGGING her?!) she reaches more and suddenly doesn't look so lame... interesting!!

The friend of mine from Alberta recently got certified to do sports therapy taping and since she has heard all the stories of Suzie, she was keen to tape her knee and "bad leg". We chatted quite a bit during the taping session and she mentioned how Suzie's left side is "pretty fucked up". I was a bit sad, but at the same time, it's not damage that I have caused and at this point, it isn't reversible damage. It's pain and arthritis that is going to be there forever and it is up to me to manage it. We also talked quite a bit about Suzie's abilities and my friend thinks strongly that I am quite clear and concise about "what I have" in the sense that, I know Suzie's limitations and based off of how I rode her earlier on I am able to know when she is resisting out of pain/limitations/fitness or disobedience. It was nice to hear that I'm not overdoing it with her or causing her extra grief. And lastly, we went over stretches to do to encourage flexibility.

Shortly after the taping session, I left my two tied at the trailer and watched my other friend's lesson before driving my two back home.

I took off the tape this morning and haven't had the chance to "watch her go" to see if it's really made a huge difference or not. Yesterday, when my nephew went for a pony ride, I noticed she was bending at the knee much better and actually reaching.
Posted by Cathryn at 3:39 PM