Three years ago today I loaded a certain ornery old red mare into a trailer and hauled her [with the help of friends] nearly 1,000km to her "forever" home. I had met her over three years prior when I had volunteered at an Equine Rescue which was run by a woman I had met about eight years before that.


It had always been a standing joke between Emmy and I that Suzie would just show up at my front door one day, as Emmy was more than willing to rehome her to me. It took almost three years for me to jump at the chance (broke high school graduate...), but I will forever be glad I did.

I didn't know it then, but this mare has truly stolen my heart, especially after losing so many horses I had grown to love and bonded with. We've had our fair share of bumps in the road, and I'll be the first to admit that age is but just a number with her. She has taught me immeasurable amounts of life lessons and I will always be grateful.

We've done a lot of cool things for the last three years. And we've come a long way since our first ride.


So thank you, sassy red-mare, for being in my life.

As a sidenote, I'd like to think that when the phrase "Hell hath no fury like a chestnut mare" was coined, whoever wrote it was thinking of Suzie. 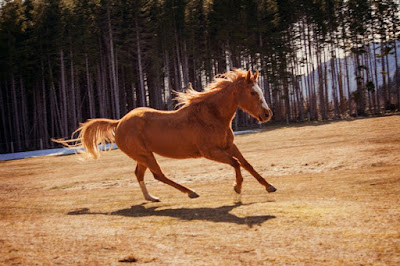