I don't know what it is about my red mare being a magnet for sink holes, but sometimes I really have to wonder what the hell the universe is thinking and why it torments me so.


In case you haven't pieced it together yet, I'll ruin the ending to the story for you and let you in on what happened yesterday afternoon. My horse sunk. Again.

It all sounds so ironic and it almost makes me seem like some reckless horse rider, but I promise you I am far from that... despite tour affinity for finding sink holes, that is. It all started out so innocently, and I had even trail-rode in this particular spot hundreds of times over the last seven years. The unfortunate position of this sink-hole was not previously known, and had it of been... I would have never gone there.

So yesterday, the sun was out and I was itching to go for a ride. Naturally, I saddled up after doing some chores like scrubbing out the water trough and filling haynets. I didn't intend to go for a long ride, as it was in the late afternoon and it would start to get dark soon. With Spud ponying behind Suzie (attached to the ring on her rear cinch like usual), we wandered down to the one watering hole like we always do for trail riding and crossed the small stream.

You may remember this small stream from a hilarious video of Spud swimming across it during the summer months (the flow of the water was quite low yesterday and it will continue to be low for the next month or so).

Anyways, we followed one of the pathways that is normally the "end" for most of the trails in the area. It has a large drop down from all the ATVers and natural erosion and Suzie maneuvered it expertly. We continued for about 15 more minutes and came across more snow before I decided to turn around, as I was alone and not a lot of the trails are "opened up" yet for the season. We maneuvered back and when I came back to that large drop, I intended to get off and walk Suzie up it, as it seemed too steep and sandy to ride safely... the sand was not packed down very well).

I turned her to the left and as we walked towards the rocky part of the stream, Suzie literally fell out beneath me. A gigantic hole swallowed her right up to her chest and as she sunk, she flailed forwards to right herself again. I was popped off her shoulder and landed near her hindquarters, my left leg hung up on the lead that attached Spud to Suzie's saddle (it was not tangled, just hung up). Spud was also sinking and both horses managed to free themselves rather quickly, and as they yanked forwards, my foot came free.

Suzie stood quietly and Spud frantically walked on the spot as sand and mud slid down his chest. My pants were soaked, boots full of water and sand, and my hoodie sleeves soaked. I immediately grabbed one of the split reins that hung on the ground and patted Suzie, thanking my lucky stars that we were all okay.

To preface any questions; this particular spot is NOT the same spot where Suzie sunk last year and the area we sunk was only about ankle deep.

I honestly was shocked how it happened, as this area did NOT show any predisposition of being "dangerous". Paint me embarrassed that this happened yet again.

Suzie came out of the sink hole very, very sore. She was noticeably lame at the walk so I walked the two horses home - my boots squished and sloshed water the whole time. Upon arriving back at the barn, I stripped Suzie of her tack and went to work on drying her and Spud off with the towel I had in the truck. After doing this, I put their blankets on to help them dry off more - it was just after 5pm and beginning to get dark. 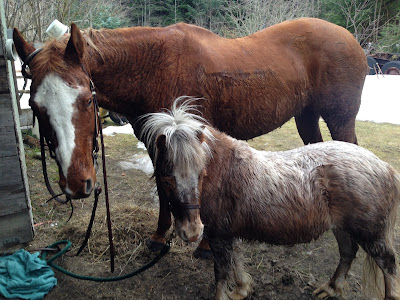 I mixed up some grain and bute, but Suzie refused to eat it (I seriously don't know why bute is cherry flavored...). So I ran back into town, changed my clothes and then scooted over to the drug store and purchased some syrgines (mine broke last Summer), and some Arnica gel.

So, I've been massaging Arnica gel into her shoulder/leg and today was her second day of bute. I trotted her out this evening and she is pretty sound now, so I'll stop the bute treatment but continue with the Arnica pills and gel.

I'm hoping to head back out to the particular area to get some pictures to show the BF, because he isn't sure the exact place i went and it literally doesn't look as dangerous as it was...
Posted by Cathryn at 9:50 PM