This past Saturday my town hosted a little "light" festival and in an attempt to ramp it up from last year, they contacted myself and a few other people from our area's horse club and asked if we would be interested in bringing the horses down. I didn't hesitate to say yes, as I love the opportunity to continue to bomb-proof my horses, especially Spud.

A friend of mine graciously trailered Spud down to the parking lot where the event would be taking place and in order for her to bring her own horses down at a relatively decent time, I was at the event nearly an hour and a half early. Did I mention it was -15C?

I was able to get Spud suited up relatively easy, as I tied him to my truck's steps to prevent him from wandering off. He was pretty mellow about everything and only let out a little "worry" poop and neighed a few times.

As soon as the event started, however, it was beginning to get dark (event was from 5-7pm) and kids literally SWARMED him. Now, I'm all for equine safety and am a large advocate of helmet wearing, etc but some parents really need to learn how to harness in their children. More than once I had to ask a child to get AWAY from Spud's cart and to NOT step into it unless I told them they could. 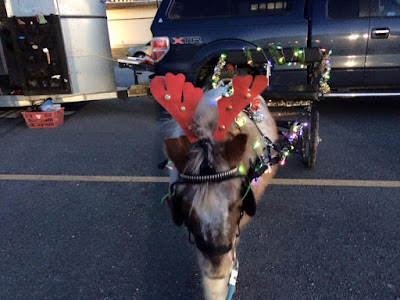 People just do not understand livestock and it was increasingly frustrating seeing waves of people crowding us and trying to get pictures taken, etc. A few kids were unsupervised and left to roam the event on their own, it seemed. There was one instance where a small girl was getting out of the cart and slapped Spud's butt (really?!). I think it was just a friendly gesture, not that she wanted him to take off, but irregardless he surged slightly forwards (not his fault). Another instance occurred where a woman was taking photos of her kiddo in the cart and before I even realized what was happening, she parked her baby stroller (including the baby!) right beside the cart's tires and moved away... Uhm, what?!

The organizers of this event need to step the game up a little bit for next year (I'm thinking having some kind of ribbon or delineation system to prevent people from coming right up to the horses). Despite this, it wasn't all bad. I did have some really good minded kids who asked and said please/thank you, which was great to see.

And Spud? Well Spud was right in his element and didn't mind several hands patting him at once. He was very inquisitive with the children and sniffed their toques and breathed on their cold cheeks. So clearly he didn't mind the mass of people. 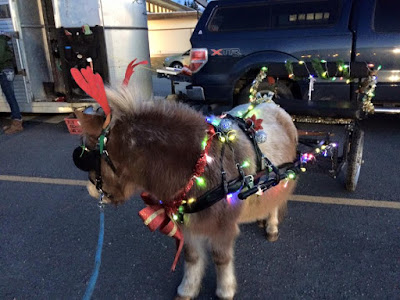 The only thing he did that was "bad" was he wiggled in the cart and was a bit of a "worm" in the sense that he wouldn't stand still during some of the night. I found out that the reasoning for this was because he was confused with all the people getting in/out of the cart because he is used to me getting in and then we GO somewhere. So the whole standing around thing wasn't his favorite. I took him for a few walk-breaks to clear his head and he seemed to do better after that.

So, things to improve on and things to learn from for sure, but Spud was a fantastic little guy. He may have gotten antsy and annoyed towards the end, but for a green driving horse, he exceeded my expectations.


Oh, and can you believe I had someone ask if he was a donkey?