Jumping Lesson on a Red-Head

This past weekend a friend of mine messaged me, asking if I would like to join a jumping lesson on Sunday morning riding his horse. I didn't have to think twice and agreed to it, happy at the chance to get some instruction as well as to ride a "new" horse. Admittedly, my excitement soon turned to a bundle of anxiety and nerves, as I had never really seen this horse perform much before.


The irony in this is that my friend's horse is a barrel prospect and hadn't been jumped much (maybe one or two single fences). So it was going to be a bit of a learning curve and I wasn't sure how his gelding would perceive the new change of work. I was promised the horse, Rookie, was sane and wouldn't kill me, so at least I had that... 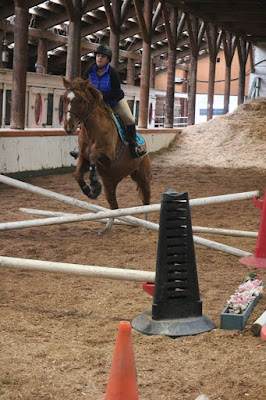 The lesson itself was really fun - I was able to ride with two of the most fun and hilarious people ever and Rookie was a solid and safe dude. He certainly was not a jumper by trade and was pretty flat with a non-existent bascule, but he didn't hesitate or show any kind of uncertainty to his new job.

There were two different variations of the course we did: 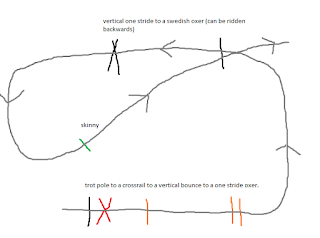 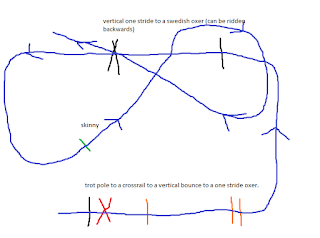 Pretty simple elements, given the fact two of the horses in the lesson were green to this whole jumping business.

After Rookie and I sorted out more of a forward button (he likes to jog and lope like a real Western horse) and were able to amp him up a bit, we worked more on trying to get him to utilize his back. Of course, with jumps that are only about 2' high, it's a difficult task but we tried nonetheless. The other thing we worked on was bend in the corners - he really struggled to the left and had a hard time softening for me.
But other than that, he was totally game and reminded me a lot of Suzie. It was a pleasure to ride him and I was happy at the chance to try him out. I felt pretty good too, considering I rarely ride other people's horses, much less jump them on the first go round!

So no, he isn't a fantastic jumper. Will never make it to the 3'9" division and probably won't be jumped much more in his life, but I think it's wonderful that his owner reached out and gave Rookie an experience most rodeo horses don't get. Having an all-around horse is what it's all about for me and the fact that Rookie took to it like a pig in mud was just icing on the cake.

The interesting thing about Rookie is that he is a lot like Suzie in the way he jumps and responds to the jumps, so I was able to get some instruction and information on how to fix Suzie as well as Rookie. I can't wait to apply it next year and see how it all pans out!