Initially, this post was going to be all about how I finally got the chance to ride my mare and how she was well behaved and quiet (although forward and slightly strong). But instead, a certain midget horse decided to rob Suzie of the lime-light and turn what was supposed to be a relaxing evening into panic-induced hysteria.

I may be exaggerating a tiny bit, but not by much.

It all started when I arrived at the barn after work to find Spud outside of the pen, grazing on grass just in front of the barn. Uhm, ok?

Slightly confused as to how he could've gotten out, I marched him back into the pasture and pulled Suzie out to tack up and get ready to ride. I didn't have any plans to bring Spud along, so I forked some hay into the feeder, tacked up, mounted and wandered off for a hack with a friend.

The ride ended up being longer than I had anticipated, since we were both gabbing away and enjoying ourselves. Upon returning to the barn I had a sinking feeling in my gut when I didn't hear Spud neighing or waiting up by the fenceline as we came up the driveway.

Suzie didn't really notice and after I pulled her bridle and saddle, she went straight to eating her grain-foods. I, however, started to get concerned.

I scanned over the pastures, checked the fencing, and frantically started to look around the barn and around the front yard. You see, the paddock set-up for my horses a bit different in that there are three different "areas" and each can be sectioned off. 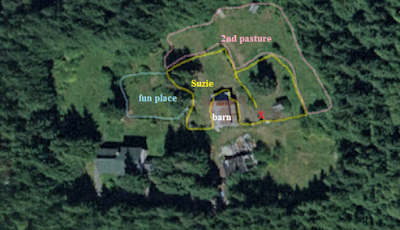 The above photo is from a previous post where Suzie was getting out and getting into another "paddock" which was not fenced (the blue). You can see where the "back pasture" (pink) is and how the "front pasture" (yellow) can also be sectioned off to make it smaller (see the red "X"? We have since put fencing there as well).

Anyway, amidst my frantic searching (because all the properties border roadways), I received a text from a horsey acquaintance who lives over on another street. 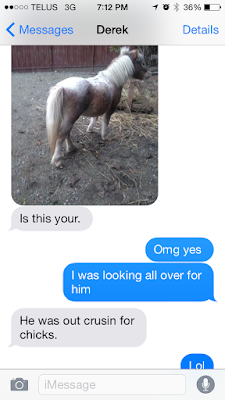 Suzie was pretty annoyed that she didn't get to finish her mash, and even spooked a bit when Spud called out when he could hear us getting close.

I am thankful he didn't get hit by a vehicle on his travels, as the particular street he ventured onto has a blind corner that most drivers veer around like Nascar.

I messed up the colors in the above photo, but it shows more clearly how the paddocks are broken up into "three". They can all be open at the same time or I can close off the "blue" or "yellow". The horses will always be in the "pink" paddock, though. Spud was getting out in the front portion of the "yellow" (see where the yellow runs off into the trees on the far right? Ya... there was a fence down over there). I've since fixed that.

Once we got back to the barn, I threw Spud into the pasture (pink) and hid Suzie in the driveway to see if I could coax him to come out again.

Boyfriend met me out there and he sat in the car watching Spud while I led Suzie away into the darkness and stood out on the road for nearly 40 minutes. Spud paced, whinnied, and pushed on the fence with his muzzle, but made no attempt to escape.

The only way (to me), that he could've gotten out was the front swing gate on the left hand side of the barn. It normally has two sets of chain that wrap around it - one at the "middle" and one lower down. I didn't do up the second chain the last day I scooped manure and it's been like that for the last 3 days or so.

The above photo shows the "chain" set up and how we had it initially. It now has two chains around it - one in the current spot it shows in the photos and another on the last "rungs". If you can imagine that? Sorry, I'm awful at explaining things! But anyways, I've done the two chains back up again since I think that might be where he's getting out. We also closed the horses off from the blue and yellow pasture for the time being to see if he can still get out and at least this narrows it down a bit more to the possible locations.

As I was leading Suzie up and down the driveway, trying to invoke a panicked response from Spud, the neighbor from directly across the street wandered over (who is also my Uncle). He mentioned to me that he put Spud back in his pen in the afternoon, as he was wandering onto his property.

So it's not like the little shit is buddy-sour since he voluntarily LEFT Suzie behind to go gallivant the neighborhood.

I thanked my Uncle for putting him back and told him we were trying to figure it all out. But after close to an hour in the darkness, we were unable to pin-point where he was escaping and had to leave the barn close to 9pm. I hadn't eaten any dinner yet and it was pitch black out. Suzie was happy to be back at the barn and eating her now very late dinner (sorry mare).

Fingers crossed he does not venture out and that the lack of "chainage" around the gate was where he had been getting loose. But knowing Spud, he'll be getting loose from somewhere else.