My most tentative "goal" for this year has finally come to fruition and been made possible by whatever positive star alignments and moon phases one could possibly need. Not in a million years did I think I would find something that could quite possibly "fit" and be at a decent price.

Ah, right. I should probably introduce just "what" I am talking about. 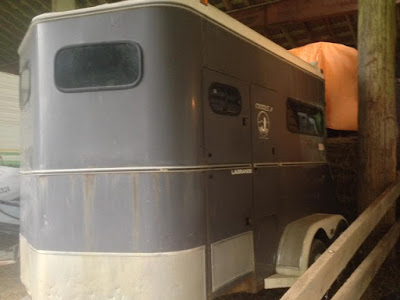 A 1994 Circle J La Grande 2 horse straight-haul bumper pull that I got for an enormous steal of a deal. Being "first" to contact the owner, I got "dibs" over the grasping hands of six other savvy horse-owners who realized what a fabulous deal it was.

Seriously guys, there were like 6 people fighting over it. 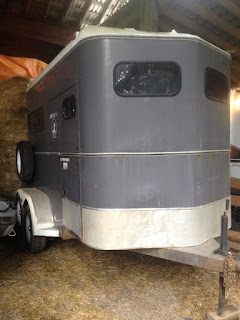 My fabulous boyfriend went out to take a look at it and due to some poor planning, I had to leave work half an hour early and drive out to transfer the trailer into my name.

It shows some wear and tear, which isn't unusual for an older trailer. Namely, there is some rusting out in certain sections - and the left brake light does not work. Nothing a little TLC won't fix up. The secondary issue is the brakes themselves - Boyfriend thinks the wiring is incorrect, as no matter what we tried, the brakes were very sensitive (like, screeching to a halt from just tapping the breaks sensitive). 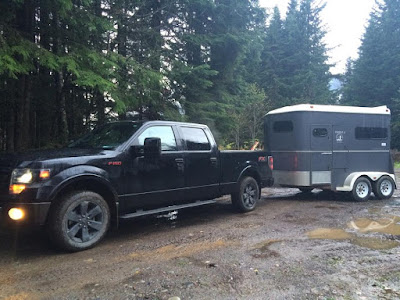 It'll most likely get used once or twice this Autumn before being stored away for the Winter-time (we intend to fix the light and brakes prior to putting horses in it, obviously). Come Spring we will actually start on the serious repairs (sand-blasting, repainting, fixing the rusted out spots).

So here she is. And I am finally free - I can haul out whenever I want, wherever I want... I no longer have to worry about borrowing someone else's trailer and no longer will have the worry of the horse's damaging something.

It isn't what I dreamed of, and it will not be a forever trailer. It'll be a stepping stone into something else, but it'll work for now. I can't wait to see the places we'll go.
Posted by Cathryn at 8:31 AM