As if showing for four days the previous week wasn't enough, I decided to enter the last show of the season in our area. It was more due to peer pressure than anything else from my showing buddy and a few other friends. Initially, I was hesitant to go because I was beginning to enjoy the idea of a four day weekend (thank you, Labour Day!) with no real responsibilities. But, the show needed more entries and it would be good practice. I signed up for two Dressage tests and four Hunter classes (because every gymkhana pony should have a chance to be a Hunter).

I wasn't able to ride much before the show, as Suzie had Monday/Tuesday off since we had come back from the BVX show. I rode on the Wednesday, a wee bit on the Thursday, and bathed on Friday evening. I wasn't expecting much considering it was an all-English show and we haven't worked much on Suzie looking like a Dressage pony.


We were out on the road about 6:15am and once arriving at the Fairgrounds, Suzie ate her breakfast mash and "Chill" while I went to go get our number. She looked around but seemed to settle pretty quickly - not fussy at the trailer or hollering out (unlike our neighbor).

About 35 minutes before our first Dressage test (I signed up for two), I hopped up and a friend lent me her gorgeous BR Premiere bridle (drool!) to match our new saddle. When I got a leg up to mount, Suzie tried to dart off beneath me and jigged for the first few steps but once I put her in the warm up arena, she settled and was quite amicable to my requests. I felt like she had a brain and was pretty pleased with our warm up - it was miles better than our warm ups at the BVX that's for sure!

I had one goal for the day: HALT at X.

In previous shows and at the BVX, our first halt in Dressage or for a pattern is ALWAYS bad. She roots and there is literally nothing I can do to stop her. I've tried putting leg on - which just ends up sending her backwards FASTER. I've attempted to get mad at her for it and she gets super light up front and threatens to rear (no beuno). I've tried blocking her with the reins but she escapes whichever way is not blocking her (ie. backwards or forwards). It's been frustrating and a bit enlightening trying to deal with it, especially since our tests from the BVX read "school that halt". We literally have no issues at our final halt or halting in the warm up pen. It is only the first halt of the pattern.

We did Training Level Test 2 and Test 3 with little to no preparation, which may have been silly to do in the first place, but overall we did not so bad. Test 2 incurred some minor pilot errors wherein we almost left the Dressage ring, but we easily crossed off my goal for the day and we halted at X at the beginning and end of both patterns! Hooray, the mare is finally getting her brains. 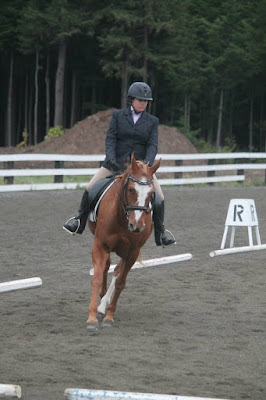 Dressage scores are as depicted below and I feel that the judge was bang-on with a lot of it. He was not a generous marker by any means but he was real and fair, which I appreciated. Our first test earned us a score of 55.6% and the second, 57%.

Not bad for never riding those tests, and for trying to make my pony go English after all year of working on Western. And as a sidenote, I had to borrow the bridle from a friend to complete the look. I had a bunch of people who knew us as "Western folk" comment on how cute Suzie was as a Dressage pony. There wasn't much media of our Dressage rides, but I was thankful for the spectators who snapped a few shots, regardless. 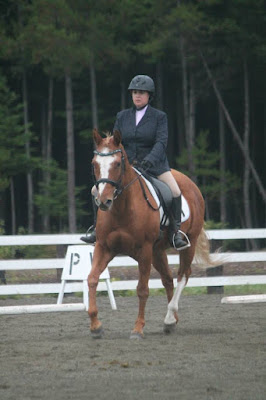 After our Dressage we had an approximate 4 hour wait until the Hunter classes so I tied Suz to the trailer and ended up helping a friend bathe her mount and get ready. Apparently Suzie tried to dig to China during my absence and a friend parked her rig beside us so my mare would have a friend. Other than digging she didn't do much besides eat and shuffle around, which was great to see.

Once lunch was over and the jump course was set, I sheepishly wandered to the warm-up ring and popped over a few cross-rails. The last time I "jumped" Suzie was probably back in December... of 2013. So I knew we were not setting ourselves up for success in that sense. But instead of knocking the jumps down like I figured she would, she hopped over them quietly and carried on with a super quiet canter. Where did my crazy mare go?


I memorized the first course and waited to go in. Suzie stood rock solid - even SLEEPING between some of the classes. You guys, this is HUGE!

Suzie was SO good. She kept a quiet canter for me and saved my ass a few times where I put her in a really bad spot chipped awfully. A few times that I was popped out of the tack she lifted her head to catch me like, "Get your shit together, lady!" Sorry mare, I haven't jumped since I rode Geronimo, and that was almost 2.5 years ago. So trying to get my sea-legs out on course was not pleasant and I'm pretty sure I gasped, "Shit, sorry mare!" in front of the judge after a particularly bad line. 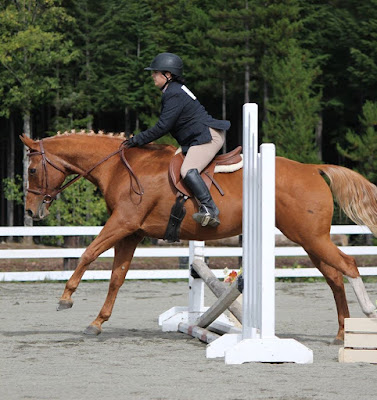 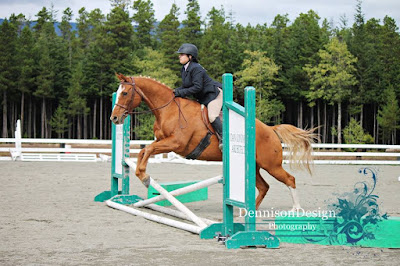 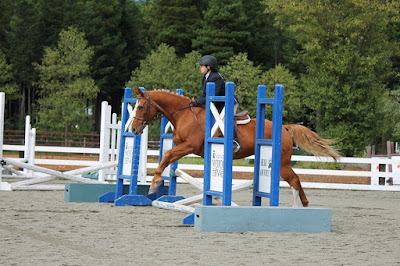 But according to the judge, it couldn't have been that bad because we ended up with two seconds, a third, and a fifth from our four rounds. Our division had the most entries (about 6-7  I think) so we certainly were up against some competition - mostly kids and younger riders, but still!

I felt pretty fabulous about our rounds and I even received a compliment from on of the Dressage riders that Suzie looked like a fab little Hunter. And as if that comment didn't go to my head, the Judge later mentioned to me that I would've placed first but Suzie "hangs" her front legs over some jumps and since it is considered dangerous/ unsatisfactory, he had to place me lower.

So all in all, this was by far the best show experience we've had all year and Mare was KILLIN' it. I am completely in awe over her behavior and how much she's changed since the beginning of our showing experiences. She was super mellow and calm at this show and we even placed against real competitors! What more could one want from their pony?