In reality, it is Spud's "gotcha" day but because I don't actually know when his birthday is, I decided to make it a combination of "Happy Gotcha Day" and "Happy Birthday". Two birds, one stone and all that.

Officially, this commemorates Spud turning six years old and me legally owning him for a full year. Despite this, I didn't actually get to bring Spud home until mid-November, once his training was completed.

If you haven't heard the story as to how I met Spud and later on bought him, I'll re-hash it for memories-sake. So here goes.

During the time I had been leasing my friend's jumper mare, Tally, I realized that I didn't have enough time to split between two riding horses and a full time job. Suzie was getting put on the back burner and evidently, it was sad that I couldn't juggle my time between the two more evenly. In addition to this, with Tally leaving in mid-October to head back home for the Winter, Suzie would be left alone at the barn and subsequently lonely. I needed to either lease out a pasture mate, or purchase another horse to keep her company. Some might say, "Why not buy Tally?" In truth, she is a fabulous mare with nothing wrong with her, but we just didn't "mesh" in some regards. She was a great riding horse and fabulous to show; just didn't exactly tick all my "check boxes". That, and she wasn't really for sale either.

With no real lease options available (and the fact that I didn't really want a full-sized pasture ornament raising my board price and not really doing anything but eating and pooping), I turned to the idea of a second horse. While it was tempting to look at all the new prospects, I resigned myself from pursuing the idea further for a multitude of reasons. Namely, the fact that I already had a difficult time riding both Tally and Suzie, as well as the fact that if I did purchase another horse it would be a young show-prospect (ie. costly). I liked that idea, but at the same time, if I barely had time to ride Suzie, how would I feel about having a costly show-prospect sitting around doing nothing?

Upon exploring what options I had (at one point we briefly considered a goat) and how to make them work, the SO and I came upon the idea of a miniature horse. I was game for that, as I wouldn't have to feel bad about not riding a second horse, or wasting a second horse's talent. It seemed like a real win/win situation - mini horses can't be ridden by me, they don't eat a lot, and they can be useful for other purposes if I would want that.

I explored numerous classified ads and realized that if I were to get a mini, I'd want one that is capable of doing a job. I'm not a huge fan of pasture ornaments if the animal is servicably sound mentally and physically. And thus, my search expanded to a driving mini.

I posted a few ads throughout various Facebook groups and was approached by a Driving Trainer down south who had given me some good pointers to look for in video ads and what to steer away from. I was both appreciative and thankful for her advice and it resulted in us communicating and discussing several For Sale ads at length and her dissecting the videos and giving me her impression on them.

At one point, a cute little paint mini was on my radar but after being made aware that he had health issues (locking stifle), I backed out of the deal. I scoured hundreds of ads and most, if not all, were minis who were just "pets". None were broke to ride or drive and I realized that finding a driving mini was going to be a lot harder than I had initially anticipated.

Crystal, the woman who had been helping me look for a horse messaged me and tagged me in a varnish appy's ad. It featured a portly little mini stood up and the ad read that the mini had been extensively ground-driven, although never hooked to a cart. I brushed it aside - the mini was not broke to cart and how would I arrange training for him down here? There are no driving trainers where I live, not even close. And in addition, he was over 16hrs away. How would I even meet him?

Nearly a week later, Crystal re-messaged me, asking to "just message" the owner of the Appy to get some additional photos and videos. Begrudgingly I did and after watching the first few videos of him ground-driving, I fell in love. Immediately I realized he was a sane, quiet, and pretty cool little dude. Crystal recognized this and offered not only her training services (at a discounted rate), but to look over Spud for any conformational defects/lameness - which I accepted with many thanks and hugs in-between.

On September 18th, 2015 I signed the paperwork and bought Spud sight unseen. He was transported by his old owner to Crystal's boarding barn where she received him and gave me the green light that he was represented accurately in his ad. The same portly pony in the ad showed up at her farm and she stated that although he needed a hoof trim, he was in good shape and was certainly not lame or dying. Both positive signs.

In no time Spud was introduced to the cart, hooked, and driven. I chronicled my journey with owning a horse I had never met or seen and having it being trained with a trainer I had never met. It was a hair-raising situation and most people probably would have succumbed to gaping ulcers, but I was surprisingly calm throughout the entire thing. Spud didn't go missing, die, or injure himself. Crystal represented herself, her business, and Spud accurately and did not sugar-coat anything. I am thankful that she was honest with me and understood both my goals and Spud's abilities. The entire situation could've gone a very different direction I am sure.

On September 30th I was able to drive down and meet Spud for the very first time since purchasing him. He was everything I expected and I actually was able to drive him as well. I could understand the green-ness Crystal spoke of in her e-mails and we agreed to leave him with her for an additional month of training. He was in good hands and he was making great progress.

I am sure that the month of October and November went by painfully slow for Suzie, who was living solo for nearly two months. She certainly was not happy to be on her own and I can't say that I blamed her. The weekend we went down to pick Spud up was a bit nerve-wracking after the Trainer's truck broke down and she was unable to meet us halfway with my new boy. I had to put out a SOS on a local classified for someone trailering through to bring him and thankfully, it all ended up working out. Instead of trailering 16hrs one way we only had to drive 7hrs. It cut down a large portion of gas costs and missed days of work, which was a huge breath of relief. 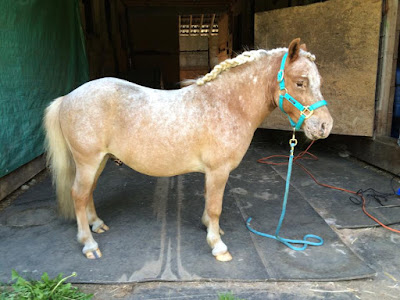 Spud traveled like a trooper - completing a nearly 6hr trip for the first day, and a 7hr trip the second. Not once did he fuss or act naughty, which was wonderful to see. I can still remember unloading him in complete darkness at the barn. He glanced around warily, but we made our way to the barn and evidently, where Suzie was waiting. They sniffed noses and after the initial sniff, Suzie nickered and nibbled at Spud's neck (I'm pretty sure she figured he was a foal).

Since then, they have been turned out together 24/7 and have been the best of friends. Although Suzie has shown him who is boss a time or two, she's been incredibly gentle with him as if she knows he's a "small person".

So would I do it all over again?

It has been a crazy, wild adventure and the journey with Spud has just begun. I may not have accomplished all the goals I had wanted to this year, but there is always next year. I have big plans for this little guy and I'm not sure he truly knows that.