Carrying on with last year's post on the "BTD series", I figured I should probably show you all we've actively been working on the lot and quite a bit has gotten done. Of course, in the grand scheme of things, we have a lot of work still but with both of us working full time (70+hrs weekly) and trying to do things ourselves (ie. the cheap way) I think we made a pretty good dent.

It has been quite the process. Because the plot is literally a forest, we've had to cut down trees and literally de-forest the area bit by bit. It's exceptionally time consuming, especially due to the fact that we want to try and keep and preserve some of the larger trees to turn into fence boards later on.


It's been a roller-coaster of work and emotions. We contracted out work on the lot mid-August and had a lot of the crappy soil and stumps trucked out which left us with the attractive swimming pool we have now.

The plan is to continue pulling down trees and pulling out the soil to clay. The current "dirt" on our lot isn't the greatest and if anything, absorbs water. Another contractor in town has offered to dump "reject" dirt at our lot free of charge, so naturally we've said yes.

It doesn't look like much and I honestly don't have much to say about it other than holy shit it's a lot of work and we still have another 4.3 acres to clear. Although, the rest of it will be easier as it will be pasture land and "dead space".

I have narrowed it down to a few barns and designs, though.


In addition, some other thoughts include corner feeders (so I don't have to worry about Spud getting Suzie's food), possible automatic waterers, saddle trees and a blanket closet.

I am still figuring out how I want the barn placed and where I would want a feeder to go, manure pile, etc. The biggest issue is figuring out if I want the barn to go length-wise with the property or width-wise, which is frustrating in itself because both pose positives and negatives.


The barn would also have 12' overhangs on the long sides and the side where no stalls are would be trailer storage. I am thinking if I want to start the fence on the stall side or on the other side... I could put another overhang on the back end of the barn and use it as a storage space for a lawnmower or driving cart, etc. It all depends, though.

Still so much to do. So much to think about.


Screw it, we'll just keep our mud swimming pool the way it is. 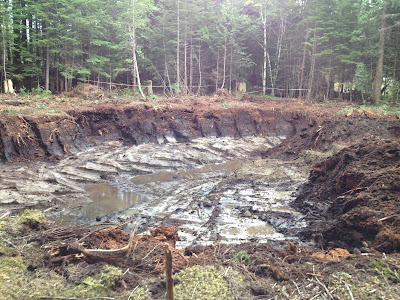