I've been putting off this post for a while, moreso because I am embarrassed and frustrated I didn't correct it sooner. But, I figure that I may be able to help someone else struggling or help the "light-bulb moment" go off. In any case, I think it's good to share things like this, especially if there is an opportunity to learn. 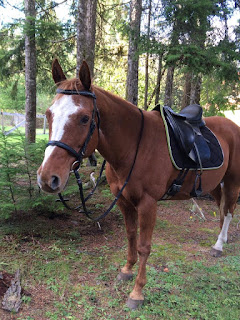 Some readers will remember my frustration with Suzie's waist-line and how I was attempting to up her weight. When I became more aware of the situation mid-July, I began trying to "fix" the problem. Initially, I assumed Suzie was becoming a hard keeper because she was getting older - heck, I even had friends comment that sometimes old horses just "sag". I wasn't convinced entirely and went ahead in deworming both horses and picked up some sunflower seed oil, beet pulp, alfalfa pellets, senior feed and went to work on graining her once a day.

By the end of August, after graining her every night, we made little to no headway and I was starting to feel as though I was losing the battle. I was frustrated with the way Suzie looked and my efforts seemed futile.

And after seeing photos from our Halter classes at the BVX, I realized we needed some serious help. I contacted a good friend down in the States who is an equestrian nutritionist and sent her the analysis on Suzie's current situation. I felt as though I had exhausted most of my options and needed some serious help, especially before Winter set in. 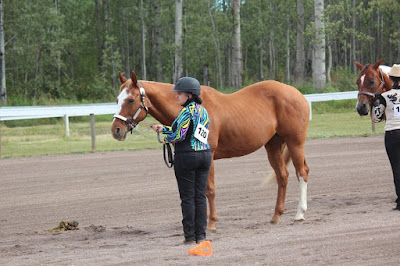 The nutritionist asked a few questions about Suzie's living arrangements, what type of hay she was eating, what her exercise regime is like, etc. I felt as though most of the questions were answered easily - she gets fed 3-4 flakes of hay 2x a day, 1 cup of oil, 2 cups of beet pulp, 1 cup alfalfa, 2-3 cups senior... Seemed like a pretty solid plan, at least to me.

The biggest, and probably most important thing I had overlooked?

"Measuring" anything in "flakes" or "cups" is not accurate when it comes to horses. Measurements must be in the form of WEIGHT (ie. lbs) - always.

I purchased a small fish scale and as instructed, weighed the feed I normally put out for the horses. Well, imagine my shock when I came to the startling realization that her hay rations were 2lbs less than what it should've been.

Secondly, graining the crap out of my mare once a day was not beneficial, as it is equivalent to eating a rather large turkey dinner and then trying to cram down dessert. The feedings should be split throughout the day to prevent "over-stuffing".

I felt like crying in the middle of the barn aisle.

Essentially, I was not meeting my horse's daily needs and in a way, was starving her. The poor attempt to make up for this in the form of beet pulp, oil, and grain was not well received by my mare because again, I was measuring "cups" rather than by weight. In addition, the sunflower seed oil I came to find was actually quite unhealthy and didn't do much to promote weight gain.

The nutritionist and I immediately scraped most of my planned regime and came up with a much more simpler version. The final verdict was: 16.5lbs hay (2x daily), 1-2lbs beet pulp (2x daily), 2lbs alfalfa pellets (2x daily), and 1/2 cup virgin olive oil (2x daily)

We have now been on the new regime for just about one month and the change is extraordinary. I am both ashamed and annoyed I even allowed her to lose weight in the first place mostly because my mare was the one who suffered in this.

I urge anyone who is having issues with their horse gaining weight to please consult a professional - do not guess and do not assume your horse is skinny because of age, breed, etc. Knowledge truly is power and if I hadn't reached out and asked the questions, we would still be at square one.

So yes, I am serving myself a slice of humble pie in hopes anyone else who reads this will evaluate their own feeding regime and ask for help.

Email ThisBlogThis!Share to TwitterShare to FacebookShare to Pinterest
Labels: before and after, feeding, life lesson, weighing feed